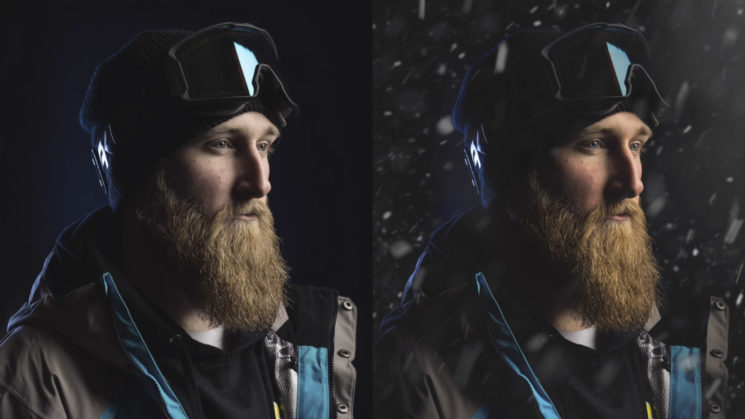 It’s that time of year when the snowy portraits come back in a big way. It can often be difficult to predict exactly when the snow will happen in many parts of the world, though. And even if you do know that snow is coming, it can sometimes be impossible to shoot in comfortably.

The default backup is to shoot in the studio and create fake snow in Photoshop, but it doesn’t always look realistic. And that’s how photographer Brandon Adam feels. So in this video, he shows us how to photograph real snow for use in compositing to make studio shots look like they were made outdoors.

Photographing and compositing real elements is almost always going to look better than trying to recreate them digitally. And that’s exactly what Brandon does. He begins by taking a black background outdoors and with his camera mounted to a tripod photographs the snow falling past it. 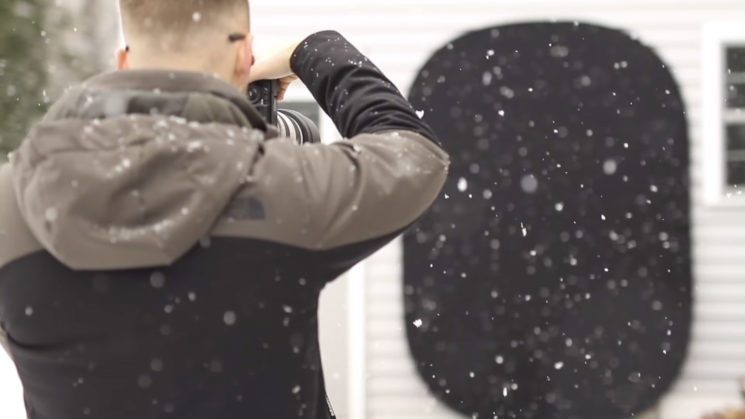 Brandon looks to be using a fairly long lens. Probably a 70-200mm f/2.8, in order to have the backdrop fill the frame. This also has the advantage of letting you get several layers of falling snow in and out of focus. He shoots images with the backdrop in both landscape and portrait orientation to give him as many options as possible in post.

Four of these snow photos are brought into photoshop and then altered using Black & White and Curves adjustment layers to prevent any colour cast, and to make the black background completely black. These are then layered onto a studio portrait. The first layer has a mask applied outlining the subject. With a slight blur, this makes it appear as though it is behind the subject.

A similar technique is used for the other three images. Each is resized to cover the image, uses the Lighten blending mode, and is then masked to help remove any distracting out of focus elements covering the subject’s face. 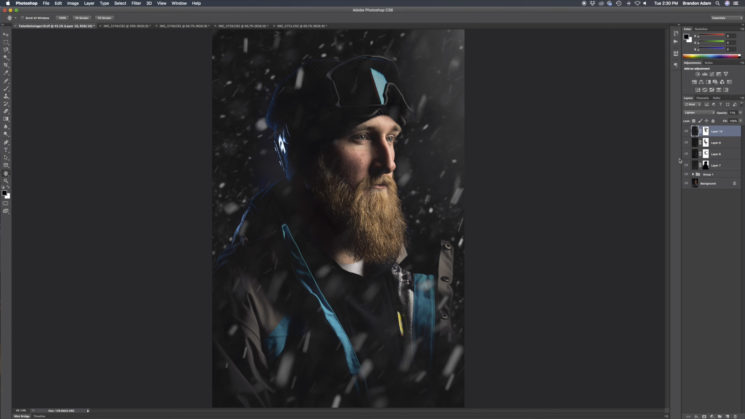 Using multiple layers in this way adds a lot of depth to the shot, and really makes it look as if it were snowing. It looks like a fantastic night time or high speed sync outdoor snowy portrait. Except, without all the cold.

So, if you’ve ever wanted to create snowy portraits, but don’t want to have to deal with directing people and gear in the cold, this is a great technique.

It’s also handy for those of us in countries where the snow is a little less than reliable. We’ve had one day of it so far this year where I live, and it was all gone with the rain within two days. If you do happen to live somewhere that gets very little snow, go out and get your black backdrop portraits the first chance you get so that you don’t have to worry about it.

7 tips for landscape photographers shooting in the winter snow