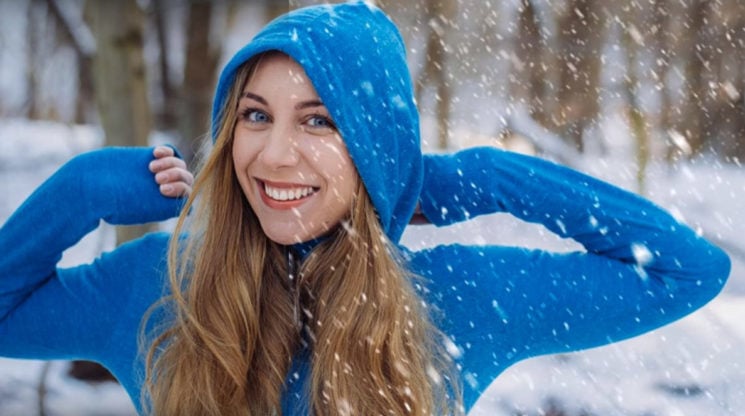 It’s that time of the year, and maybe you became impatient while waiting for the first snow to fall. Or perhaps you’re like me and hate taking photos while it’s snowing. Either way, Photoshop comes to the rescue. In his latest tutorial, Jesús Ramirez will show you how to add realistic snow to your photos. He demonstrates two methods, so you can pick the one you like better and enjoy the warmth of your home while playing in Photoshop. It’s a great way to spend a gray, cold afternoon.

This method is the simpler one, and it can work with any image of snow with the black background.

Open the Creative Cloud library and load a photo of falling snow you previously downloaded from Adobe Stock. Click and drag it into the portrait, hold the Shift (Option) key, and click and drag it until it fills the image.

Now, go to blending modes and choose “Screen.” It will hide the dark background, leaving you with just the snowflakes over the original photo. Of course, you can pick up the snow images from other sources too, and there are some great ones at RAW Exchange.

This method requires you to make the snow from scratch. Although it’s longer, I found it fun to play with, and it can give a pretty good result.

Start by creating a new layer and filling it with white (click Alt + Backspace on Windows or Option + Delete on Mac). Then, go to Filter > Noise > Add noise and crank it up all the way. 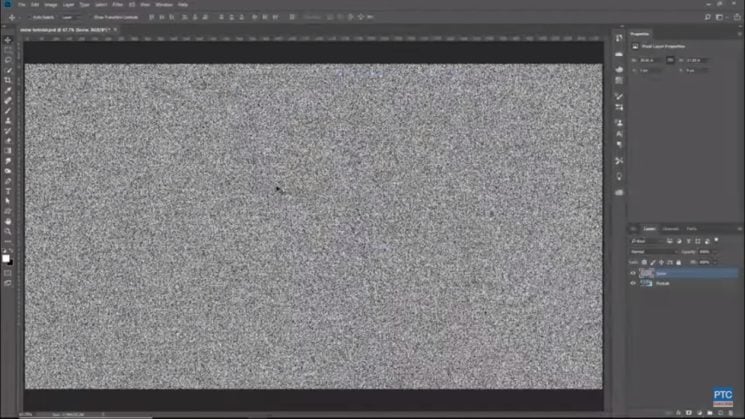 Next, go to Filter > Blur > Gaussian Blur and add about 3pixels of the blur. 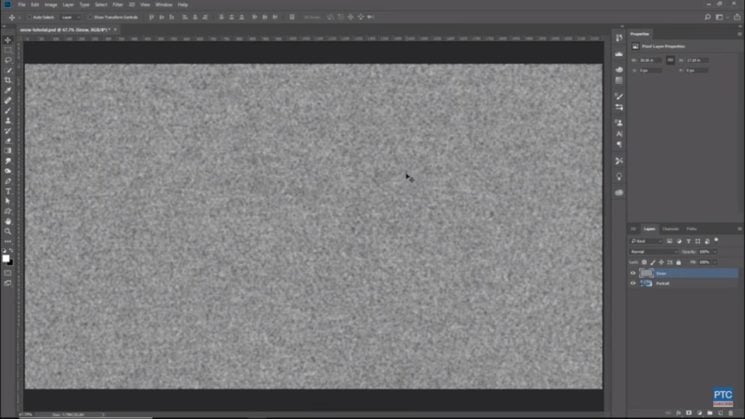 After this, go to Image > Adjustments > Threshold and use the slider to adjust the look of the specks. 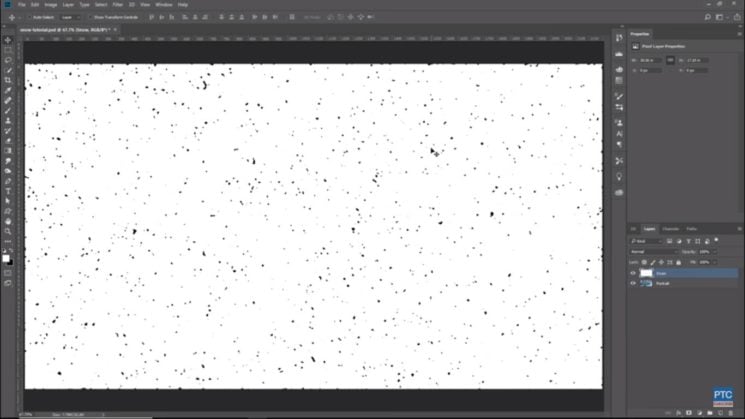 Since the resulting image will have the white background and black specks, you need to invert it. Press Ctrl + I or Cmd + I, and you’ll get the white “snow” on the black background. After this step, Jesus copies the layer so he can later demonstrate a technique that only works in Photoshop CC. So if you’re using the latest version of Photoshop, we’ll get to it later. 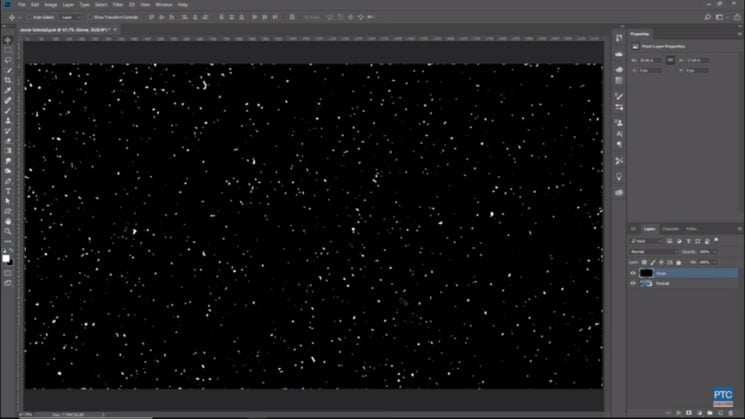 Now that you’ve got the white snow, it’s time to add some motion to it. Go to Filter > Blur > Motion Blur. Set up the angle (-50˚ in Jesús’ case), and drag the slider until the snow has some motion to it. Don’t overdo it, because it will start looking more like a pouring rain. 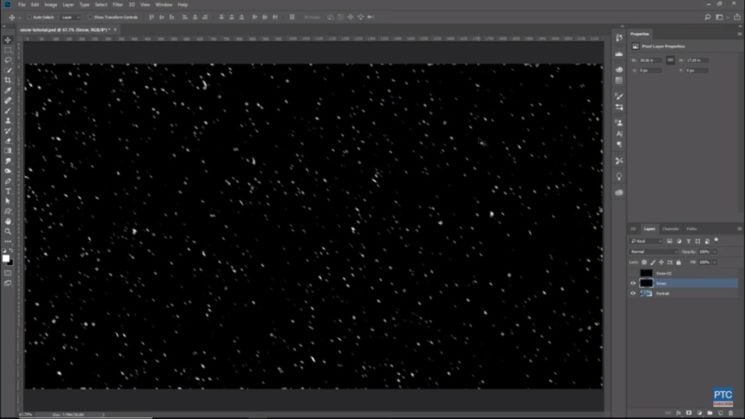 When you’ve added the motion, select the “Screen” blending mode, and it will hide the dark background. It looks okay, but you’re not quite there yet.

Copy the “snow” layer and zoom the photo out. Press Ctrl/Cmd + T to transform it, and drag to enlarge it while holding Shift + Alt or Shift + Option. This will add more depth to the image, creating the illusion of out-of-focus snow that’s near the camera. You can also add some rotation to this layer while transforming it.

Now, copy the original “snow” layer and drag the copy under it. It will mimic the snow that’s further from the subject. Press Ctrl + T or Cmd + T and make it smaller. Then, hold Alt and move the layer to duplicate it three times until the copies fill the frame.

When you duplicate the “snow far” layer, there might be a seam visible. Select all the “snow far” layer and press Ctrl + E or Cmd + E to merge them. Use the Spot Healing Brush tool to paint away the seams. Again, make this layer’s blending mode “Screen” to hide the black background. Go to Filter > Blur > Gaussian blur to match the depth of field, because if it were real snow, it would be blurred in the background.

From here, you can play with the layers and add more snow by copying and transforming the original snow layer. Here’s what I got in one of my very rare winter photos, as I was trying this out while making the write-up. Not quite there yet, but not bad for a first, quick attempt, I guess: 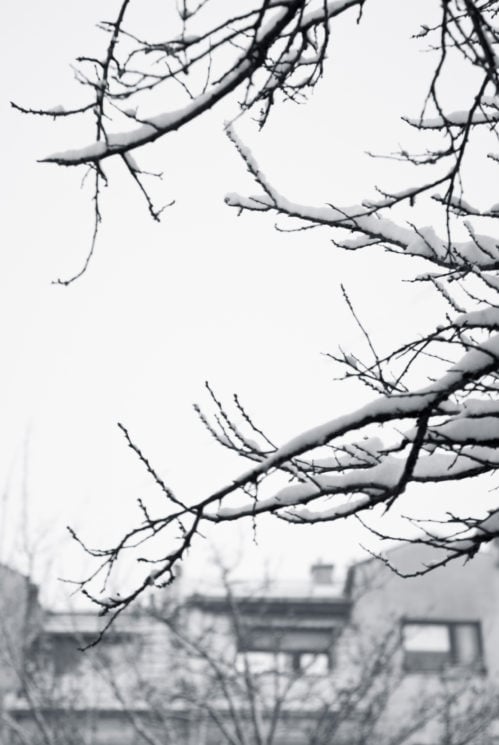 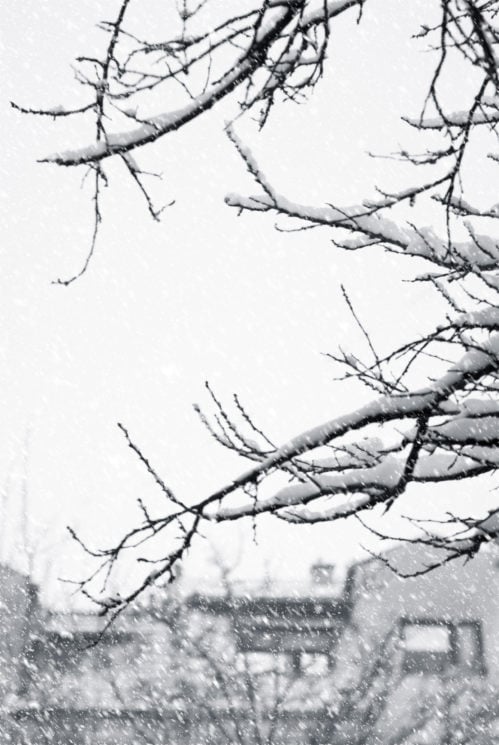 As I mentioned above, there’s one trick that you can use in Photoshop CC. Jesús finishes the tutorial with it, and uses the “snow” layer he created first.

Go to the “snow” layer, go to Filter > Blur Gallery > Path Blur. With this tool, you can determine the direction of the falling snow and make the movement more or less prominent. You can create a curve so it looks like the snow falls in different directions. This can replace your original “snow” layer.

Have fun playing with this Photoshop technique and adding snow to your images. And of course, brace yourselves, winter is coming.

How to create realistic Avengers-style disintegration effect in Photoshop

« Build a tiny cinema camera kit for under $300
Dear photographers, this is when you should NOT take photos »