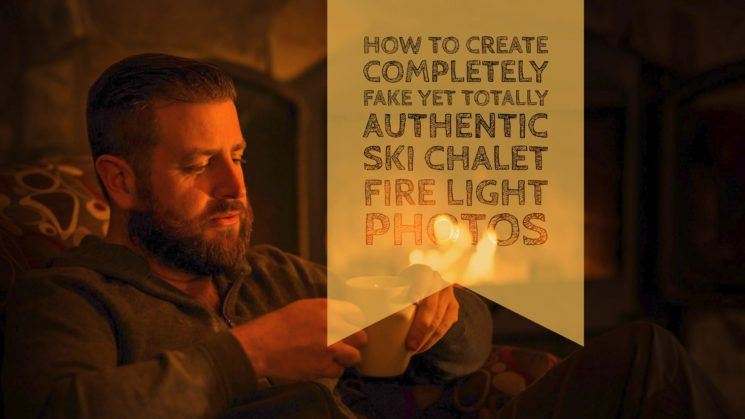 We recently spent some time skiing at Mont Tremblant in Quebec Canada.

One of the highlights of skiing is, of course, the apres ski. For me that means sitting by the fire with a good book / coffee / scotch.

In this post, I will share all of the details (technical and aesthetic) that went into creating this series of completely fake yet totally authentic ski chalet fire light photos… 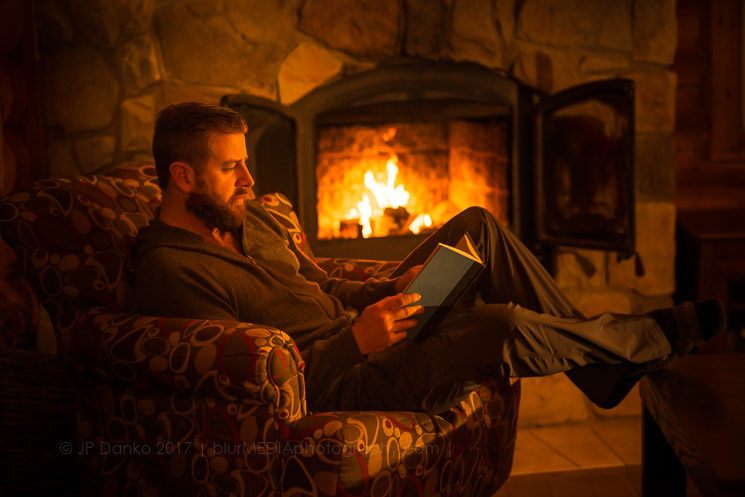 First of all, let’s get the technical details out of the way – they’re really the most boring part and the easiest to replicate.

All of the images in this series were captured hand held with a Nikon D800 and Sigma 85mm f/1.4 ART lens. My specific camera settings were ISO 800, 1/125 shutter speed, f/2.0 aperture, daylight white balance. The exposure was set to capture as much as the ambient firelight as possible, without overexposing the flames.

Using a fast medium telephoto lens provides a shallow depth of field and minimal distortion – although my wife who actually photographed this series had to stand outside and photograph through the patio door on the opposite side of the room to get far enough away for some of the wider images.

There is a Nikon SB-800 strobe sitting in a coffee mug (because I didn’t bring a light stand) on the coffee table to the right. The strobe is set to manual mode at 1/64th power, pointing up and to the left with the built in diffuser down.

Without the strobe, I would just be a silhouette unless I massively over-exposed the fire itself. It was also important to place the strobe to approximate the direction of light from the fire. In fact, here is how the scene looked with just firelight. 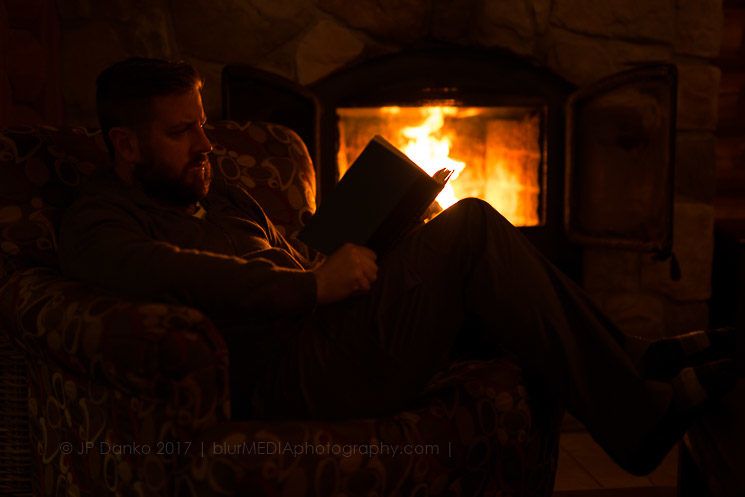 In order to balance the orange light from the fire, I had to warm up the color of light from the strobe with two full CTO gels (color temperature orange).

The strobe was triggered using a set of Cactus V6 radio triggers.

Now here is the fun stuff.

First, lets start with the ski chalet itself. Yes, I specifically rented this particular chalet because I thought that it had a very French Canadian wilderness ideal ski chalet vibe to it – with a good looking fireplace – which is of course the heart of any great ski chalet (complete with vintage snowshoes – yes!) 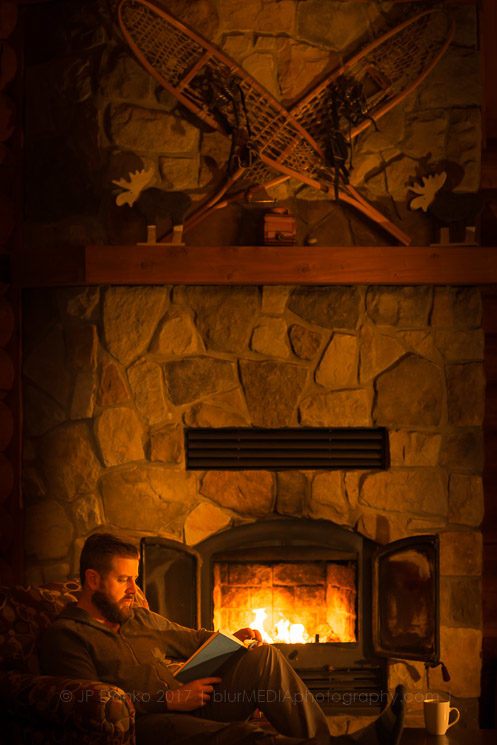 Next, the fire. I used one of those manufactured firelogs (essentially a big candle that is made out of sawdust and wax). It is much easier to maintain a consistent flame with a fire log versus a real fire – which affects both the aesthetic and exposure.

I don’t love the pattern on the chair, but that’s what I had to work with. In order to get the chair in the right location, we had to clean up a bunch of stuff that was in front of the fireplace and move an end table. I also had to tidy up a few things cluttering the mantle and coffee table.

Did you notice the book? We took off the dust cover to give it a more generic appearance (and avoid copyright issues).

The coffee mug is just a prop (it’s scotch, not coffee). I think it looks a little cheesy and forced, but not too bad.

Finally, it took me three months to grow out that beard – specifically as a prop for photos on our ski trip. I wanted to portray a more rugged, Canadian lumberjack style that matched the chalet.

My wife absolutely hates the beard – but this entire series was her idea, so I think that she’ll admit that at least it works for pictures. 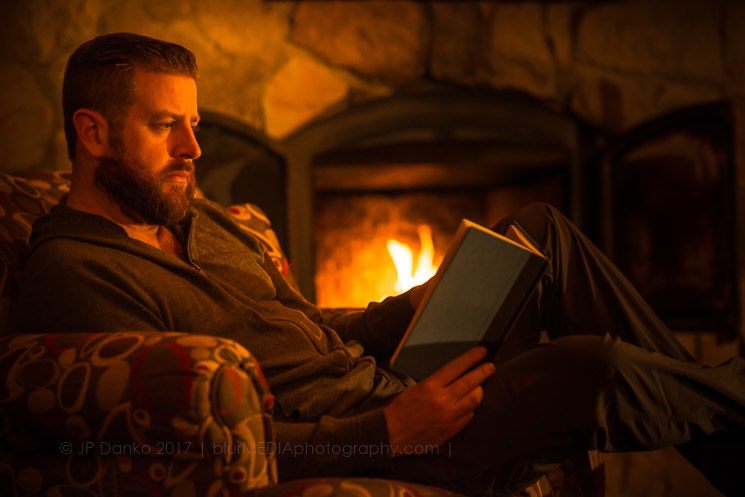 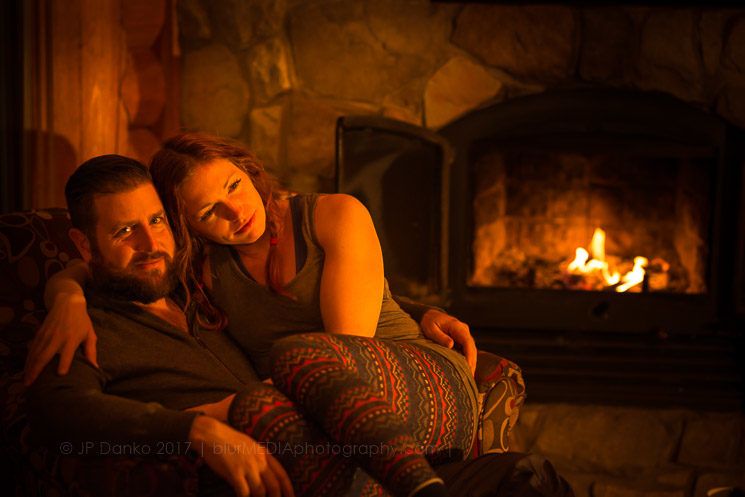 The final images were processed with Adobe Lightroom. I didn’t really have to do too much post processing. I increased the exposure a little, added some contrast and reduced the noise as my basic adjustments.

Other than that, the key thing I did in Lightroom was to add a gradient with an exposure adjustment of -2 from each edge of the photo. When you’re looking at a fireplace, you expect the light to emanate from the fire and then quickly drop off – so I tried to mimic the look of natural fire light with the gradients – here is an example of an image right out of camera with just an exposure adjustment, and the finished image: 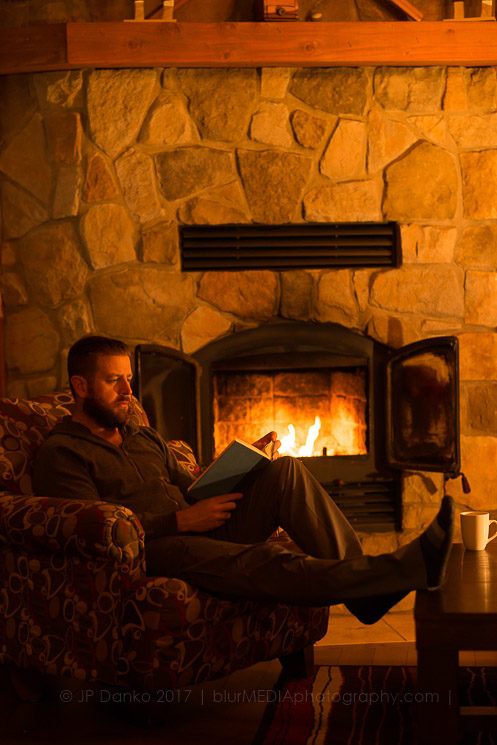 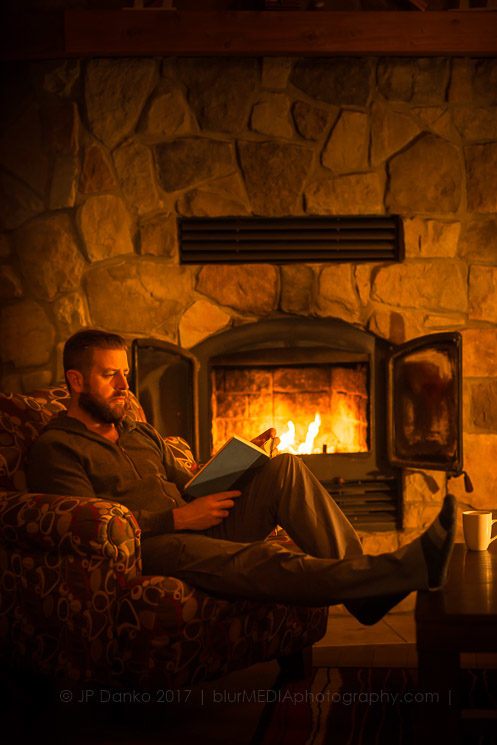 What do you think of the beard?

« From losing your gear to losing your life – how much would you risk for a shot?
How would you feel about appearing in a selfie with a deceased loved-one? »