How do you feel about the prospect of appearing in a selfie with an avatar of someone who’s not there? Maybe just someone who couldn’t make it to the party. Or perhaps a deceased loved-one? 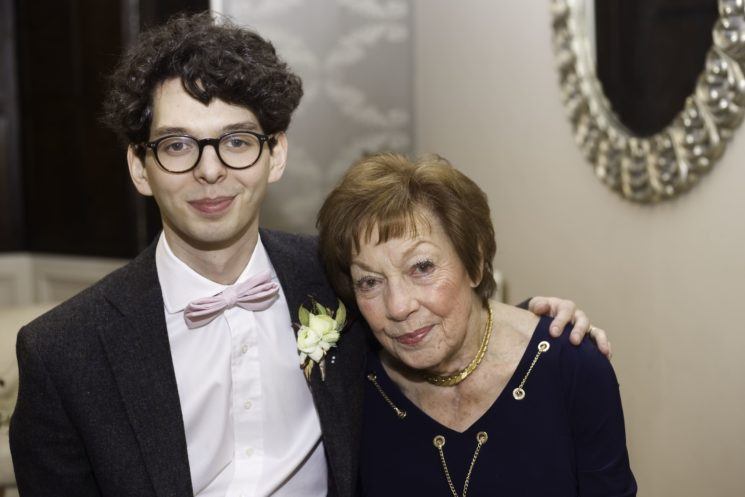 My brother and our grandmother on his wedding day in November 2016. (Photo by Melissa.) Our grandfather died in 2004. How would I feel about him appearing here?

The ability to do this is something that Elrois, a South Korea-based company unveiled at Mobile World Congress in Barcelona.

With Me was developed by Eun Jin Lim following the death of her grandmother. She realized that she didn’t have any photos of her and her grandmother together and would like to be able to rectify that.

The app works by allowing its users to insert an avatar of someone who isn’t around into a selfie. Using the app’s AI, you can even hold a (to be honest slightly stilted) conversation with your absent loved-one.

However, the app’s technology wouldn’t allow Eun Jin Lim to insert her grandmother into a selfie today. Anyone you want to render as an avatar needs to be 3-D scanned, and then digitally recreated while they are still alive. This is more planning for the future than recreating the past.

I can barely cope with a relative who keeps my great uncle’s ashes in an urn on her mantlepiece. That I might want to insert someone I love, but who’s dead, into a holiday snap leaves me feeling slightly uncomfortable. The prospect of someone who’s long-gone appearing beside a newborn baby is even worse. Not to mention that the historian in me is heaving at the prospect of future archivists trying to piece together documents and timelines when birth and death certificates say one thing and a photo shows another.

However, I can understand why some people might want to do this. I know of one family who took a deceased relative’s ashes to Royal Ascot (and had plans for Goodwood, Lord’s, and grouse shooting, too) because she never had the opportunity to do it when she was alive. Maybe an avatar and a few selfies would be an alternative? For other people, it could be an important part of the letting-go process.

When interviewed by the BBC’s Chris Foxx and asked if she were creating ‘fake memories’, Eun Jin Lim said that really the presence is in someone’s mind.

What do you think? Creepy or comforting? And is this sort of application something to which we will have to grow accustomed?

« How To Create Completely Fake Yet Totally Authentic Ski Chalet Fire Light Photos
A guide on how to approach dodge and burn, what are you trying to fix? »