Understandably, I was very excited to hear the news of Fujifilm bringing back NEOPAN 100 ACROS in the form of ACROS II earlier this year. So, when a second announcement came with details of a November 22nd Japanese release date, I started making calls to see if I could buy some. I got lucky and $190 dollars and a week later, I received my shipment; a brick each of 35mm and 120 ACROS II.

With all this new film on hand, the only reasonable thing to do is a side-by-side of ACROS and ACROS II in both formats. Although I’m still waiting to be able to shoot a side-by-side with the old and new 35mm versions, I made a first-pass on 120 the weekend just gone: old and new ACROS in the same camera using the same lens, same aperture/shutter settings and importantly: the same scenes.

The results – as clickbait headlines love to tell us – will surprise you, or maybe not. You’ll have to decide for yourself.

IS ACROS II NOT ACROS?

There’s been what’s best described as a kerfuffle on social media and internet forums about new ACROS II. I spend a lot of time on social media and Twitter, Facebook, IG, Reddit, etc., so my experience may be amplified compared to many of you reading this but it’s there.

As noted by Kosmo Foto, Japanese photographer shoichi_aoyama posted a now-expired Instagram story showing “Made in UK” markings on the box, which kickstarted conspiracy theory and “fact” pulled out of thin air. These mostly revolve around the film being a rebrand of an ILFORD stock – from Kentmere 100 to FP4 PLUS, to Delta 100…any ~100 ISO film.

I had a bit of fun with it. 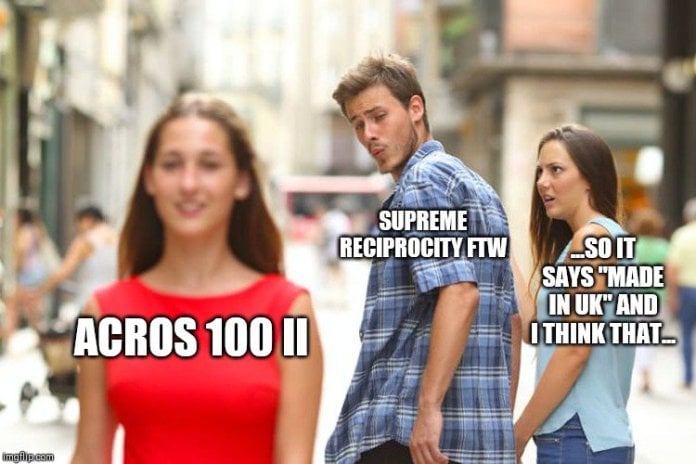 Taking more of a backed-by-knowledge-and-experience perspective the “Made in UK” tells me that unless Fujifilm UK have done the incredibly unlikely and sprouted a new film manufacture plant (they have been investing in expanding their UK operations), the film is either finished by or entirely manufactured by HARMAN technology aka ILFORD Photo. This may be stating the obvious but it needs to be said.

I’m ok with that.

Allow me a minute to try and add some clarity to the conversation with a restatement of information already in the public domain:

With that out of the way, on to the test shoot…

I shot the frames you see below with my Hasselblad 2000FCW and Carl Zeiss Planar F 80mm f/2.8 lens. Exposure settings for each frame were made using a Nikon F6 in matrix metering mode (I was also shooting a roll in that for a future complete review). The vast majority of the frames were shot at f/4 or f/8 with a couple of f/11 frames thrown in for good measure.

In total, I shot four rolls of 120 for this article: 2x ACROS and 2x ACROS II at box speed, plus another one and a bit rolls of 35mm film at EI 200. The original 120 ACROS (v1) was from the final batch and has an expiry date of October 2019. It had been cold-stored since being purchased brand new.

Development information for ACROS II is very limited. Fujifilm’s ACROS II processing guide currently provides only two developer options: Microfine and Super Prodol (SPD). The published times are the same as original ACROS so, in my infinite wisdom, I decided that this was enough evidence for me to assume that times for other chemistry – namely HC-110 – would also be the same. I stand to be corrected.

The film was developed in HC-110 1+31 (dilution B) at 20c for 4m 45s with a usual 1-minute continuous agitation followed by 10 seconds each minute thereafter. This was followed by the normal rinse, stop, fix, LFN, rinse, etc., nothing special there. Once dry, the negatives were scanned at 1600dpi using an Epson GT-X970 (Perfection v750 Pro) scanner, straightened, cropped and de-dusted in Adobe Lightroom.

The 12 side-by-side pairs which follow below are 1200x1200px versions of those 1600dpi scans. Drag the handle in the middle of each frame to see the differences between the two film stocks (or lack of, in places).

Important: if you’re coming from social media on a mobile/tablet device, use the menu to open this article in your normal web browser (Chrome, Safari, etc.) The “webview” that comes with your FB/IG/Twitter apps will break the comparison sliders below.

Before you go on, if you’re planning on sharing this article to social media/forums, etc., please don’t spoil the result below, thanks.

You may have already guessed correctly – and I was incredibly tempted not to include this – the original ACROS frames are on the left and ACROS II are on the right. Is there enough of a difference for it to affect your current ACROS process? If I had told you they were the other way around, would it have mattered?

Questions for another time, I suppose.

They’re close, almost indistinguishable in some cases. What differences exist, vary from mildly obvious to very slight. They also differ from scene to scene and from light to light. The variations are small enough to be corrected either during the scan, in Lightroom, etc., or in the darkroom. Naturally, flatter negatives could also be obtained using different developers and recipes.

On the whole, compared to original ACROS, ACROS II displays an increased contrast in the mid-tones and a bit more kick in the low tones. Highlights remain largely the same. As an aside, I’d like to go out and shoot some cars/water to try to capture a few examples of extreme specular highlights but that’s for the future. I like the look of it. It’s close to my style of photography and for those who don’t, it’ll mean just a few seconds of correction in a digital or traditional darkroom.

It seems like there’s a bit less shadow detail in ACROS II for this specific development recipe. That said, bumping the scanner’s brightness, adjusting the black and white points, or even playing around in Lightroom shows a wonderful amount of shadow detail.

To demonstrate, here are two pairs of ACROS II frames with Lightroom Shadows, Whites and Blacks bumped to +100, +70 and +100 respectively (#10 above and a new frame). Extreme but you get the point and there’s more detail to be had in the darkroom, no doubt.

You won’t find the second frame in the original list because of a cock-up which made the original ACROS frame unusable for this article. Such is life.

This is admittedly a limited sample set and of course, changes in the film development process, alternate chemistry, dilutions and differing scanning practices will all change the look of the film to some extent.

Take what you will from these samples, they’re to give you a feeling, not provide gospel truth – just look at the variations in contrast, tonality and grain Scott Micciche found during his extensive Ferrania P30 developer testing.

As you’ll find with every single film stock ever made, my results will probably not mirror yours, ever. Forgetting about variations in gear for a moment, the available light, its intensity, its angle due to the time of day and season (it’s Winter here) mean that even if I go back to the same location a few months from now, I’ll likely not be able to catch the same scenes in quite the same way – hence the matched pairs.

For my part, I’m content with the updated ACROS II and welcome its return. There will no doubt remain numerous naysayers, conspiracy theorists and others in our community who will refuse to believe that this film is a new stock and instead call it a rebrand of something or other – even suggesting its “the same film, higher price”.

To them, I say this: there are better things for you to concern yourself with. Go shoot some film. Unless you have direct evidence to the contrary, please let everyone else get on with it, too. Adding a comment stating, “this is a rebrand” on social media doesn’t add to the conversation in any conceivable way, quite the opposite.

I’d also like to extend an invitation to those still convinced of conspiracy to give it a little more effort. Consider this runaway train of “logic”: the reciprocity failure of ACROS II makes it FAR more likely that it’s a rebrand of Kodak T-MAX 100 than ILFORD FP4 PLUS or Delta 100. It’s quite possible that Fujifilm is paying ILFORD to make a film that was in-turn licenced from Eastman Kodak. Consider also that the available evidence indicates that all still photographic film is made by ADOX using the Svalbard Global Seed Vault as a cover, with Kodak motion picture film being produced in a secret facility underneath Uluru. That facility’s exhaust vents are located at the top of the rock formation and due to the need to expand the site, the Uluru-Kata Tjuta National Park board of management announced that from 2019, visitors to the park would no longer be allowed to climb it and thus uncover the dark secret.

Now that’s something people can get their teeth into. Feel free to run with it.

To end on a serious note, I for one plan on buying more once these rolls are shot, processed and printed. With my EI 200, 400 and 800 tests already in progress or coming up, plus a crack at reversal development into slides and giving away/trading a few rolls, that’s probably going to be sooner than my wallet might like but hey, #shootfilmstaybroke, right?

Your thoughts in the comments below, please.

EM is a film photographer and founder of EMULSIVE, a blog about film photography, reviews, experiments, interviews, and culture. EMULSIVE is about latitude and depth, not megapixels and actuations, as the founder describes it. You can check out more on their Facebook page, Instagram, YouTube channel, and Twitter. This article was also published here and shared with permission.

These are the film stocks Fujifilm will abandon in 2018
« Ektachrome 120 and 4×5 formats will be available in the next ten days, Kodak confirms
Shooting street photography in Ethiopia with the Fujifilm X-T3 »