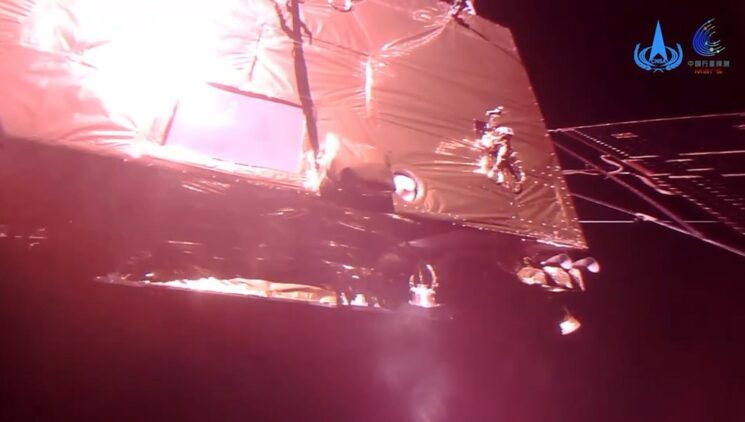 We have welcomed the Year of the Tiger yesterday, and it looks like Lunar New Year isn’t only celebrated here on Earth. China’s Mars probe Tianwen-1 sends its greetings from the Red Planet’s orbit and shares a video selfie it snapped on 1 February, the eve of the Chinese Lunar New Year.

The China National Space Administration (CNSA) shared the clip showing the orbiter’s 3000N engine, propellant tank, attitude control engine, and other components. Other than using it to greet the people on the Chinese Lunar New Year’s eve, it also shows that all of the components are in good condition, as China Xinhua News notes.

China's Mars probe Tianwen-1 extended festival greetings to the Chinese people with stunning video footage captured by a camera on its orbiter to snap selfies above the red planet on Monday, the eve of the Chinese Lunar New Year https://t.co/6lCYTk7zEf pic.twitter.com/GfSe3tBZEJ

Tianwen-1 was launched on 23 July 2020 and it reached the Martian orbit on 10 February last year. So far, it has sent back 600 GB of raw scientific data, according to CNSA.

China’s Mars rover Zhurong snapped its first selfie in June 2021. In January this year, CNSA shared the first photos Tianwen-1 sent back to Earth. Since it will soon mark its first anniversary in Mars’s orbit, I guess there will be another celebration that includes videos and photos from up there.