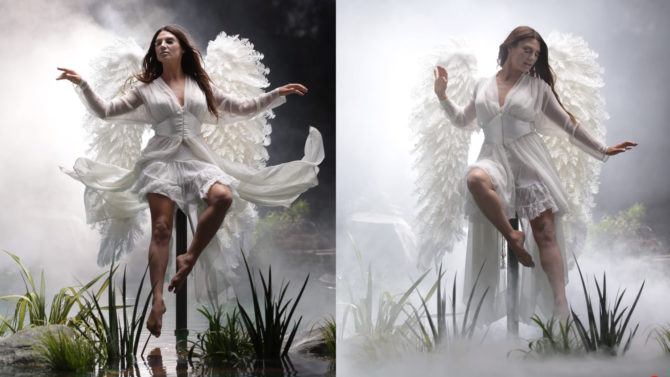 High speed sync (HSS) has taken off in a big way the last few years. A relatively new technology, high speed sync has largely been limited to speedlights. The lack of power has put many people off using it. Unless you have a bunch of them, you just can’t usually get the shots you want.

HSS features have been appearing in many new powerful studio strobes lately, but what about your old ones? Are they useless now? Absolutely not. In his latest video, Jay P. Morgan is here to show you how to get high speed flash capabilities with studio strobes.

It’s a neat trick if you have older strobes laying around that have long flash durations. As long as they can output the same power for the duration of your shutter speed, you’re good to go. Obviously, though, strobes with very fast durations probably won’t work. They just peak too early, and drop off before you get to the end of the exposure.

You’ll want to be in manual power mode for this. Otherwise, in TTL mode, the pre-flashes can cause the strobe to fire far too early. Even with a long flash duration, firing before the shutter’s even opened can cause wildly inconsistent results.

I’ve used a similar technique myself in the past, except I did it with radio triggers instead of optical slave. This can be a little bit more tricky depending on the triggers you have.

I used Yong RF-602 triggers. They’ve changed the design of the transmitter, but originally they came with a PC Sync socket. The only real difference is that I used a sync cable between the camera body & RF-602 transmitter. Then I put an RF-602 receiver onto each studio strobe.

The end result was the same, though. I could now shoot faster than my sync speed with studio strobes. It was pretty reliable, too. That being said, different camera bodies and strobes do have different limits. So, you’ll want to practise with your own kit, and see where it falls over.

Workarounds like this are great when they work, but you can’t always rely on them. So if you don’t yet own strobes, think carefully before you buy. I’d suggest going for ones that come with HSS capabilities if you think you’ll utilise them often.

Have you tried workarounds like this to get HSS-like abilities with your strobes? Did you buy strobes that had high shutter speed capabilities built in? Or do you just use ND filters? What do you use? Let us know in the comments.