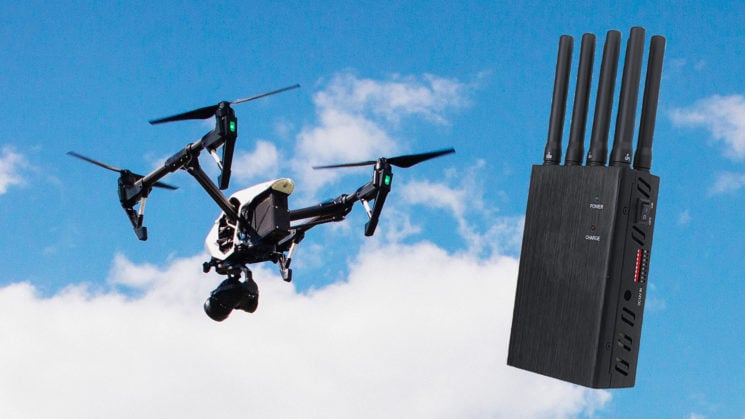 For years, companies have been working on finding ways to safely (and sometimes not) take out drones doing things they shouldn’t be doing – whether it’s flying too close to crowds or delivering contraband to prisons. The keyword there is “safely”. There are plenty of ways to take down drones these days, but most aren’t safe and they can cause havoc to legitimate drone pilots flying completely legally.

But perhaps the most potentially dangerous are the cheap GPS jammers available online from sites such as Banggood  – which are illegal in much of the world. These devices, which can cost as little as $20, interfere with the GPS signals reaching your drone so it has no idea where it is, causing it to potentially just fall out of the sky. But solutions are out there.

The reason these jammers cause such an issue is that many drones – particularly pro-level drones for commercial work – typically have some kind of GPS homing system built into their firmware. In the event that you lose signal between the drone and controller, for example, the drone starts turning around and flying back towards where it took off from in the hopes that the signal can be reestablished or that the drone can land somewhat safely before the batteries die.

It relies on GPS in order to know where it is and where it’s going. But as was proven during a choreographed drone light show in Hong Kong in 2017, when drones lose this GPS signal, with no clue where they are, they can often just fall out of the sky wherever they happen to be. In that instance, 46 drones plummeted towards the ground, costing an estimated HK$1,000,000 (around US$130,000).

But for commercial drone pilots on legitimate flights, there are some potential defences. ZDNet highlights InfiniDome’s GPSdome, in particular, as an example that employs “a unique interference filtering system” to minimise jamming signals. It works by combining patterns from multiple antennas in realtime to determine what’s a true signal and what’s just noise (or intentional interference) to clean up the signal and keep the drone flying and knowing where it is.

In principle, the idea sounds a lot like why many of us use balanced XLR cables for audio, which (simplified explanation) essentially uses a pair of signals to maximise the quality of the signal between the microphone and whatever it’s plugged into, cancelling out noise and rejecting interference. While it’s not quite the same process, being able to compare two separate signals makes it a lot easier to spot what shouldn’t be there.

In reality, while kits like the GPSdome may work, they’re also going to add more expense to your rig to protect yourself from something that isn’t even legal in most of the world anyway. Hopefully, at some point, this is something that commercial and higher-end drone manufacturers will choose to implement in their drones as standard.

If eagles and drone-mounted-shotguns weren’t enough to worry about, now anybody can potentially take out your drone – even if they are breaking the law whilst doing it.