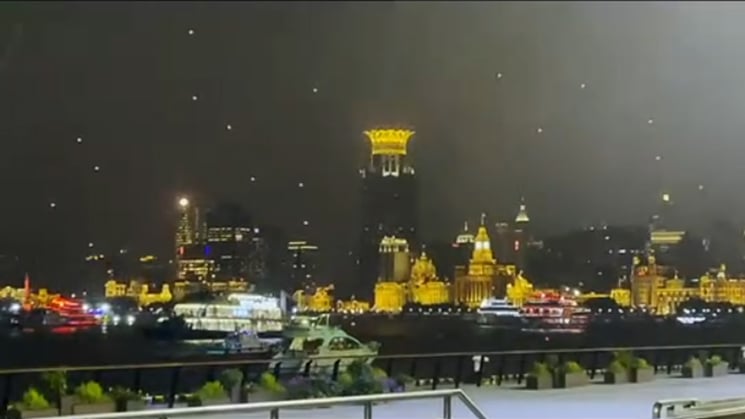 Drone light shows have become all the rage over the last couple of years across the world, but probably no more so than in China, where most of the world’s drones are developed and built. Drone shows have almost become the new fireworks displays in China, with every team attempting to outdo not only each other but their own previous displays.

Inevitably, though, something was going to go wrong one day, and it seems that it has. During a show in Shanghai, China, involving almost 1,000 drones, some started plummeting from the sky in the middle of the show, possibly causing injuries – maybe? It’s a little unclear. Also unclear is what caused the drones to suddenly fall from the sky in the first place.

As reported by Kanzhaji, the incident took place during a display on the North Bund of Shanghai on June 14th. The accident, they say, caused “personal injury and property damage”, although the Google-translated headline contains a question mark around the mention of injury and later on, they say no one was injured,. Yet further on in their report, they say that people have told them there were injuries. So, I’m not entirely sure.

One company has come out to emphatically say that it was not them, although the display perhaps uses their hardware? Again, the Google translation is a little odd, so I’m not entirely sure. But it reads like the display appeared similar to those of a known company – the one that’s come out to say it’s not them and that there are other companies out there stealing their fonts and look. There seems to be quite a bit of finger-pointing going on in the article, too, with everybody trying to assign blame to some company or other.

Exactly what caused the incident is unclear. The initial obvious thought some kind of remote takedown, however, it didn’t take them all down, just some of them., which would be odd. You’d expect a display like this to be using many identical drones, all susceptible to the same potential attacks. And drones that experience random interference don’t typically just drop from the sky, they just lose GPS and sort of drift a bit until they can figure out what’s what.

Although, it’s definitely possible that a device can cause interference that makes drones fall from the sky. We’ve posted about such devices here on DIYP before, which cost as little as £20 on sites like AliExpress. And light shows in Hong Kong have been targets of such devices in the past. Still, if this is the case, it’s odd that only a relatively small proportion of drones were affected and not many more.

You can see in the video how and when they fall, with most seeming to land in the water and a few of them diving straight into luxury yachts. Fortunately, such events aren’t common, but they can never be completely ruled out. So, if you’re going to be anywhere near a drone light show, it’s probably best if you don’t stand right beneath them.