The image is not a screenshot from a class b horror movie showing an opening to hell, though with the temperatures and winds it captured it very well might have been. This unearthly hurricane eye is a staggering 1,250 miles across with cloud speeds as fast as 330 miles per hour.

This photograph of a Saturnian Hurricane (higher res here) was captured in November 2012 by Cassini, an unmanned spacecraft orbiting Saturn since 2004. (Launched by NASA in October 1997). 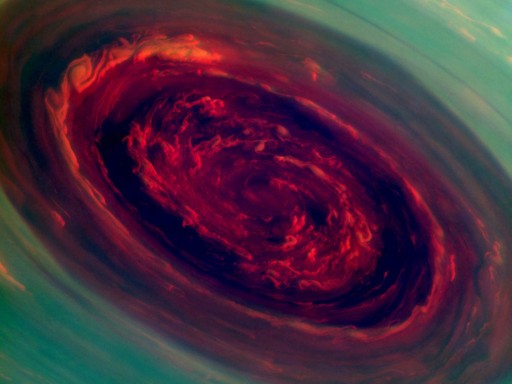 “The spinning vortex of Saturn’s north polar storm resembles a deep red rose of giant proportions surrounded by green foliage in this false-color image from NASA’s Cassini spacecraft. Measurements have sized the eye at a staggering 1,250 miles (2,000 kilometers) across with cloud speeds as fast as 330 miles per hour (150 meters per second).

This image is among the first sunlit views of Saturn’s north pole captured by Cassini’s imaging cameras. When the spacecraft arrived in the Saturnian system in 2004, it was northern winter and the north pole was in darkness. Saturn’s north pole was last imaged under sunlight by NASA’s Voyager 2 in 1981; however, the observation geometry did not allow for detailed views of the poles. Consequently, it is not known how long this newly discovered north-polar hurricane has been active.

While the hurricane is about 2,000 kilometers across its image was taken with Cassini’s narrow angle camera sub system from the Imaging Science Subsystem (ISS) which packs enough resolution to “…see a quarter — 2.4 centimeters (0.9 inches) across — from a distance of nearly 4 kilometers (2.5 miles)“

[The Rose | NASA via Colossal]