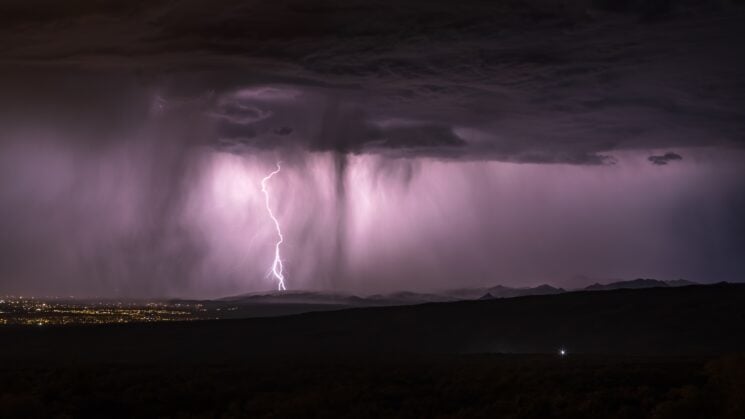 I always find videos of storm chasers fascinating. The things that will make them turn around and go in the opposite direction to everyone fleeing harm’s way and actually seek out imminent danger is something that I find simultaneously admirable and baffling. But it’s an incredibly dangerous job, and it’s not always possible to put actual humans in the path of a category 4 or 5 hurricane. So, enter the drones.

This Saildrone actually survived inside a category 4 hurricane, and the footage it captured is pretty amazing. It’s apparently the world’s first video from inside such a severe storm at sea. Warning: may cause nausea.

The footage was captured by the Saildrone’s onboard camera during the category 4 Hurricane Sam and shows the drone being batted about by 50-foot mountainous waves and winds of over 120mph. The horizon is all over the place, this looks more like footage from a shipwreck movie and I feel slightly queasy even watching.

The Saildrone is not your average consumer piloted drone. In fact, it doesn’t even fly! It’s categorised as an uncrewed surface vehicle and according to the website is the “most capable, proven, and trusted platforms available for the collection of high-quality ocean data”.

The drones are both wind and solar-powered and are sent out across the ocean to collect data where it would be nearly impossible to have a manned operation, particularly in the harshest environments. They operate 24/7 and use AI machine learning to collect and manage the data. The company has partnered with the National Oceanic and Atmospheric Administration (NOAA) to better study hurricanes and the environment around them.

What drives the intensity of the hurricanes is the transfer of heat and moisture from the ocean to atmosphere and the dynamics of how that occurs isn’t well-understood – Richard Jenkins, founder and CEO of Saildrone, Inc

By studying the surface data of the storm they hope to be better able to predict when and where giant tropical storms will occur as well as monitor how quickly they intensify. After a devastating hurricane season so far in 2021 and with climate change making these events more likely it’s a valuable piece of equipment.

The drones won’t be replacing the hurricane planes anytime soon, however. “Both are vital,” says Jenkins. “The planes are trying to get an accurate pressure reading from the centre of the storm, which they do very well. We are trying to get surface dynamics. So we are getting different kinds of variables.” Hopefully, the combination of the two will help predict catastrophic events in the future and help save lives.

Cassini’s Closeup On A Saturn Hurricane