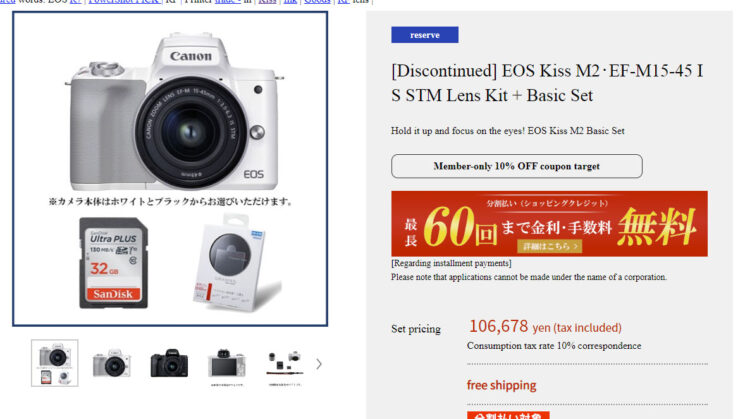 It looks like the Canon EOS M system’s death knell is ringing loud and clear. After discontinuing the Canon EOS M200 only last week, the final remaining camera in the EOS M lineup is also on its way out. It appears that the Canon EOS M50 Mark II, released only in 2020, has now been partially discontinued at Canon Japan.

Asobinet reports that the Canon Kiss M2 (that’s what Canon Japan calls the EOS M50 Mark II) body-only kit is now listed as discontinued on Canon Japan’s website. They say that the two kits containing lenses have not yet been discontinued. As of right now, though, Canon’s online store also lists the Kiss M2 and EF-M 15-45mm IS STM kit lens package is also discontinued.

There is still some hope for those in Japan who want to pick up an EOS M50 Mark II. The twin lens package containing the 15-45mm IS STM and 55-200mm f/4.5-6.34 IS STM lenses is still available. For now, at least. I expect that once current stocks sell out, that will be gone, too. There doesn’t seem to have been any discontinuation anywhere else in the world yet, although I suppose that will now be inevitable as supplies dwindle.

With no replacement model in sight, it seems that the EOS R system is going to be Canon’s way forward when it comes to APS-C mirrorless now. Honestly, it makes a lot of sense and should’ve been their position from day one, really. Maintaining two completely separate mount systems was never really going to work.

The beginning of the end? Canon reported to have discontinued the EOS M6 Mark II with no successor announced