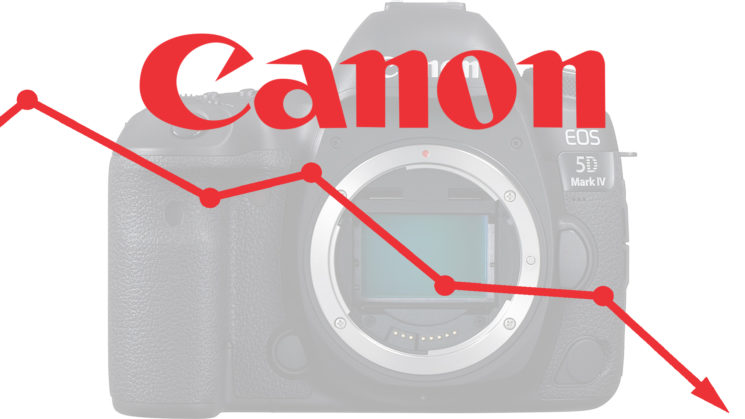 Canon recently released its Q3/2019 financial report and the results are once again pretty bad in the imaging division. The trend of declining sales and profits continues, with a 13.9% decrease in sales and a 56.8% decrease in profits compared to the Q3/2018.

At the beginning of this year, Canon predicted a grim future for the camera business. Canon’s president Fujio Mitarai said back then that the digital cameras market could shrink by 50% within the next two years. And it seems that this is happening.

According to the latest financial report, the overall camera sales have declined in the Canon Imaging System. The company notes that this is due to the impact of global market contraction, but they have still seen a growth in the unit sales of mirrorless cameras. However, the overall drop in net sales is decreased by 13.9% compared to the same period last year, while operating profit has declined by 56.8%.

Canon showed a dramatic decline in sales and profits in both Q1 and Q2 of 2019 compared to the same periods in 2018. The Q1 results showed a 23% decline in camera sales and a massive 81% drop in operating profit. In Q2 of 2019, the camera profit dropped 64%. Judging from the latest financial results, the trend continues.

The company isn’t optimistic about the future of its camera business due to a variety of factors. First of all, there’s an expectation of a prolonged trade war between the United States and China. “This is not only impacting China, but also having a rippling effect on surrounding emerging markets of Asia,” Canon writes. “In addition to this, it is unclear what will happen with Brexit or in the Middle East,” which affects the global economy, and certainly Canon isn’t excluded.

While the political factors affect Cano’s business overall, their imaging department suffers for one more reason. A “more severe competitive environment” is, according to Canon, another reason why camera sales have been plummeting during 2019. The company expects approximately 20% overall decrease in total cameras sales in 2019 as compared to the previous year.

CIPA’s reports show that overall camera production has been declining almost constantly since 2010. And naturally, this hits camera companies in terms of profits. The reasons for the decline can be many, starting from global reasons such as political or economic issues. Then, the increased quality of phone cameras certainly has an impact, too, as well as the competition between camera makers. And finally, on a smaller scale, there are individual users who simply don’t need an upgrade and they don’t make purchases. Whatever the main reason may be, Canon’s financial results show that the camera industry is changing fast.

You can get the full financial report and read more on Canon’s website.