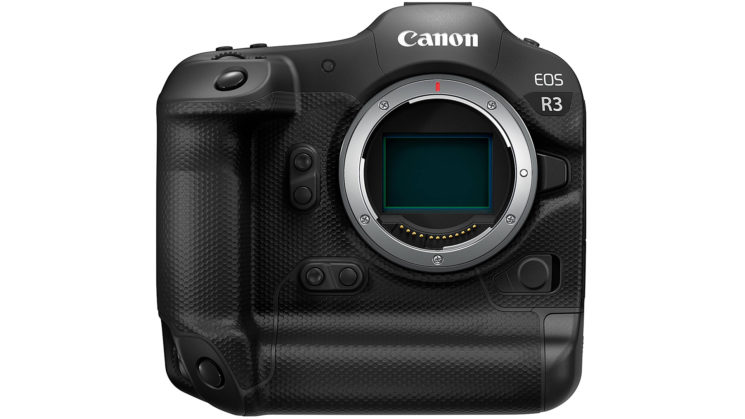 So, I have to start this post by saying that I was wrong. I really didn’t expect the Canon EOS R3 to come with a $6K price tag at all. I figured it would be closer to something like the Sony A9 II’s $4.5K, but nope. Canon has now officially announced their latest EOS R3 mirrorless camera and it is indeed $5,999. When you look at the specs, though, it sure makes sense.

The new full-frame sports, wildlife and photojournalism flagship from Canon shoots 24.1-megapixel images at up to 30 frames per second (with the electronic shutter), full-width 6K RAW video at up to 60fps and 4K video at up to 120fps as well as bringing back a Canon classic; Eye Control AF. Oh, yeah, and it also has a flippy out LCD.

The Canon EOS R3 is built primarily for the speed and reliability that fast action sports photographers and photojournalists depend on to earn a living. It’s the first “3-series” canon since the film days, and it brings with it a film-era feature in the form of Eye Control AF. It also offers a number of other improvements over the EOS 1DX Mark III it replaces as Canon’s main speed demon.

Aside from its speed, the big stand out feature on the Canon EOS R3 is the Eye Controlled AF. Featured back in 35mm SLRs like the Canon EOS 5, it’s been notably absent from Canon’s digital offerings until now. Canon says that the system is easily to calibrate and can even be synced up between multiple bodies via memory card to make sure your backup acts exactly like your main body. 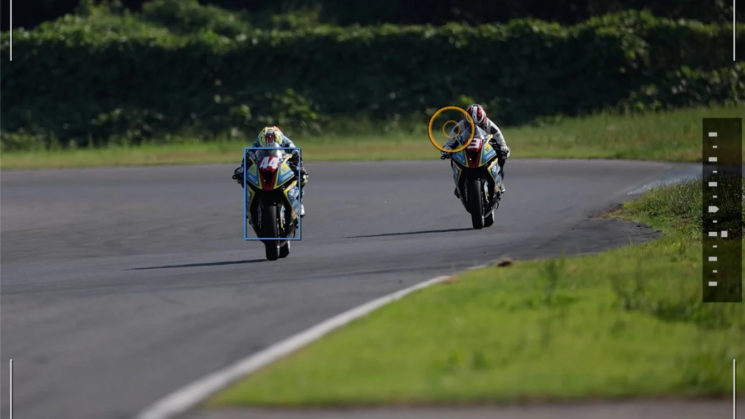 Eye Control AF in action through the EVF. An indicator shows where the photographer is looking and the camera’s focus follows.

As well as the LCD on the EOS R3 being of the articulated flippy out variety, it’s also extremely high resolution. The 3.2″ 4,150,000 pixel touchscreen LCD is a pretty big improvement over the 2,100,000 pixel LCD of the Canon EOS 1DX Mark III and EOS R5. It’s clear that the camera is aimed as much towards video as it is towards stills and it appears to be no slouch at either.

A first for Canon, too, is another big feature on the EOS R3. The electronic shutter actually works with third-party flashes. So, if you’re dealing with low light and want to add a pop of flash on a quick burst, you’re able to. Although, the EOS R3 has respectable high ISO performance, too, with a native range going up to 102,400 (expandable up to 204,800). You also get up to 8 stops of image stabilisation when combining the 5-axis sensor-shift IBIS with the stabilisation built into Canon’s IS lenses. 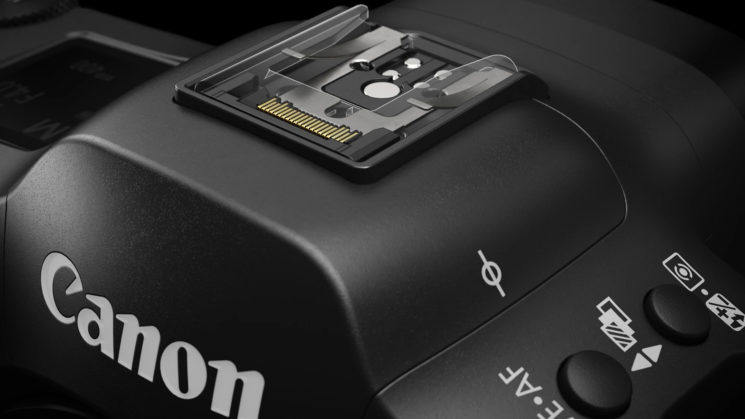 Another new feature to help speed up the workflow when shooting in fast-paced environments is a multifunction hotshoe that’s quite reminiscent of Sony’s. It allows you to power accessories directly from the camera’s hotshoe, such as the new Canon DM-E1D on-camera microphone or the ST-E10 flash trigger – both of which were also announced today. The new multifunction hotshoe also allows digital two-way data communication, letting your camera pull the audio feed straight from the shoe or send more detailed flash information to your trigger. No extra batteries or cables to worry about. Just slot it on the shoe and you’re good to go.

You can find out more about the Canon EOS R3 on the Canon website, where they have a nice side-by-side comparison showing the major specs vs the EOS 1DX Mark III DSLR and the EOS R5 mirrorless camera.

The Canon EOS R3 is available to pre-order now for $5,999 and is expected to start shipping in November. How large the supply will be at that time, though, remains to be seen. So, if you’re dead set on getting one, you’ll want to pre-order sooner rather than later.

Now I’m really curious how expensive the Canon EOS R1 is going to be!