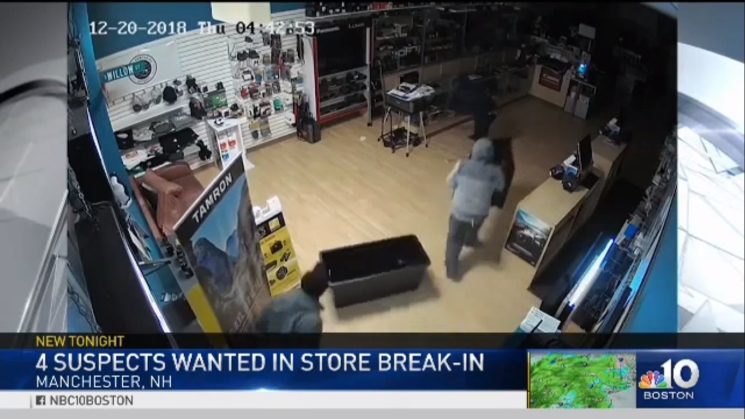 In Manchester, New Hampshire, four thieves broke into at Hunt’s Photo and Video. They smashed a glass door with an ax, filled huge buckets with gear and stormed out. They were caught on the store’s security camera and the footage shows that they did it all in just 53 seconds.

The thieves broke the glass door first, and then they broke the glass shelves inside the store. The break-in happened before 5 a.m. on Thursday, 20 December. They moved quickly, and it took them under a minute to steal as much as $50,000 worth of camera and lenses.

To make things worse, the same store was already robbed four months ago. The store manager Harper Hodges believes that the two robberies might be related, and the store is in total loss of $100,000 after them.

However, after the first break-in, Hodges installed a high-end surveillance camera right above the front doors. It caught the thieves this time and the footage is pretty clear. One of them reveals his face for a brief moment, and Hodges hopes that this will help the police find the suspects.

Unfortunately, large gear thefts happen from time to time, and sometimes it takes only a few seconds for huge damage. A similar theft happened this time last year at The Camera Store. However, the gear was found shortly after, and I sure hope that Hunt’s Photo and Video will see their gear soon, too.

« How to create a light painting set with a towel, shower curtain and some paper
NASA has created posters for every space mission and they’re so bad they’re amazing »