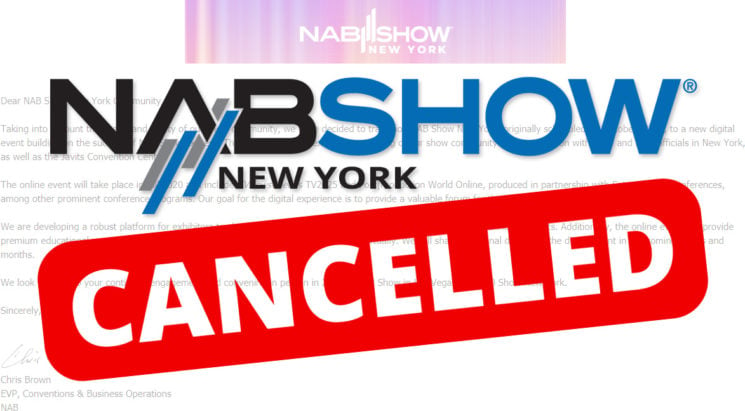 It appears that October isn’t far enough away to reliably hold a show, at least not in New York. We’ve been told by a source close to NAB Show New York that organisers have begun sending out emails informing people that the NAB Show New York, which was scheduled to take place on October 21st & 22nd at the Javits Convention Center in New York, has been cancelled. 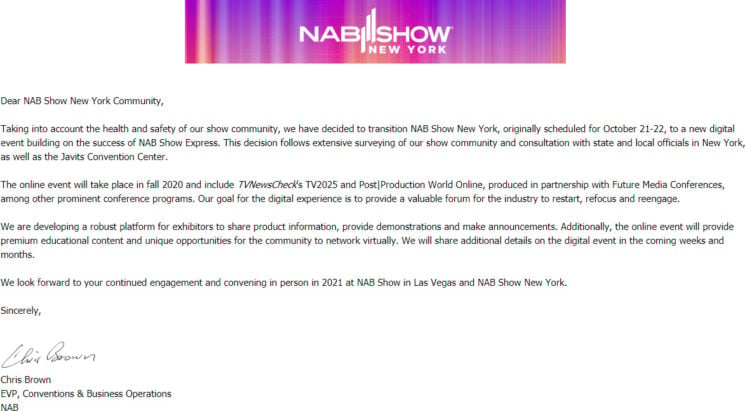 The body of the email reads as follows…

Taking into account the health and safety of our show community, we have decided to transition NAB Show New York, originally scheduled for October 21-22, to a new digital event building on the success of NAB Show Express. This decision follows extensive surveying of our show community and consultation with state and local officials in New York, as well as the Javits Convention Center.

The online event will take place in fall 2020 and include TVNewsCheck’s TV2025 and Post|Production World Online, produced in partnership with Future Media Conferences, among other prominent conference programs. Our goal for the digital experience is to provide a valuable forum for the industry to restart, refocus and reengage.

We are developing a robust platform for exhibitors to share product information, provide demonstrations and make announcements. Additionally, the online event will provide premium educational content and unique opportunities for the community to network virtually. We will share additional details on the digital event in the coming weeks and months.

We look forward to your continued engagement and convening in person in 2021 at NAB Show in Las Vegas and NAB Show New York.

There’s no mention of the cancellation on the NAB Show NY website yet, although I don’t expect it’ll be too long before that gets updated to reflect the new status of the show. As with just about every other show this year, NAB Show NY is moving to an online virtual platform.

The news comes on the heels of September’s rescheduled The Photography Show in the UK also being cancelled, announced just last week. It now seems almost certain that we’ll also hear an announcement soon with regard to PhotoPlus, which is currently also set to take place at the Javits Convention Center in New York between October 22-24th, beginning right as NAB Show NY closes.