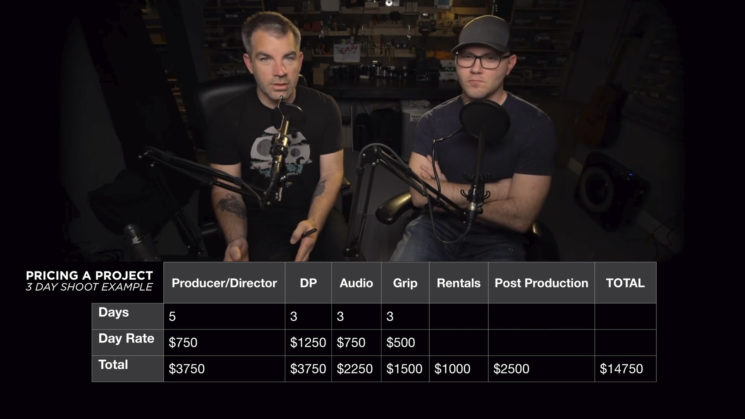 Charging for video work, especially when you’re quite new to dealing with clients, can often be quite difficult. You don’t want to quote ridiculously high and scare off the potential client. But you also don’t want to quote far too low and risk not being taken seriously. Or, worse, them accepting it and you making no money for your time and effort.

So, how much should you charge? In this video, Caleb Pike chats with producer and director Corbyn Tyson about how to price up and quote for a video shoot. Now, every client’s needs will be different, and you’ll need to adapt this to your own workflow, but it should give you some idea of where to start with even modest projects.

The example used in the video is a typical 3-day shoot. This example does assume you’re working with some kind of crew. Because many video projects that take a couple of days or more will require that. There’s the producer, director, director of photography, the “audio guy” (which doesn’t have to be a guy), editor, and potentially more depending on the job’s needs.

You’ve also got to account for your equipment. If you’re renting, then covering the cost of that rental is obvious. If you own the gear, though, you still need to recover that money you’ve put down to purchase it. That’s just the way business works. Items can die and you need to buy another. You may need to upgrade to meet new demands that clients place upon you. And video gear is often so much more expensive than photography gear.

Corbyn’s total for this three-day shoot comes to $14,750. That covers hiring the crew, equipment and post-production. But there are ways you can save money. Corbyn says he typically has some wiggle room with rental and post-production costs for clients that want to negotiate, as they can be done in-house and he doesn’t have to pay somebody else’s rate back out.

But depending on your own needs, you can potentially cut out certain crew that you may need to hire. Perhaps you’re a one-man band, that doesn’t typically work with a crew, and you’re only working on 5-10 minute videos that can be shot and edited in a day or two. Working this way does mean more work for you, though, so take that into account.

At the very least, and I completely agree with this, Corbyn suggests at least having a dedicated audio person. Audio is the one part of video that you really can’t try to cut corners with. And concentrating on the audio while you’re trying to run cameras and direct can be an impossible task. Because you don’t know if you’ve really got what you need until you play it back, and by then it’s often too late to shoot it again if it doesn’t sound right.

“If you’re not scared crapless when you send that quote, then you’re not charging enough”

The goal, says Corbyn, is to aim for 40-50% profit in your quote. After all, you are a business. You need to make money, as all businesses and people do. You have taxes and bills to pay, this is your job, and it needs to cover those. If you’re charging half of what you should be, and then it all ends up going straight back out to crew and rental expenses, you’re basically working for free.

And speaking of working for free, Corbyn says that if you’re young and just starting out, then go help others already doing what you want to do, for free if you have to. Learn from them. That’s what he did. You’re not totally working for free as you can be gaining valuable education and insight from it, and potentially industry contacts. But make sure that you are actually learning something, or you’re just wasting your time.

How much should photographers charge in 2018

How much should you charge for pro photography