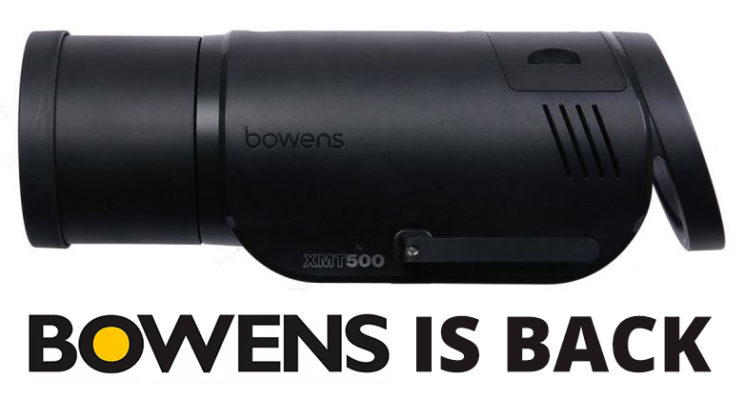 When we first heard that Bowens was going into liquidation, and then the official announcement that came a few days later, it was the end of an era. After 94 years in business, one of the oldest flash manufacturers out there was closing for good. Or were they? At the time, it seemed so. But now, it looks like no, they’re back.

Bowens was bought out by the AURELIUS investment company along with Calumet back in 2016. AURELIUS also owns WEX Photo Video, who has now pretty much entirely consumed Calumet in the UK. And the Bowens name now looks set to be the WEX “own brand” lighting system. Today they’ve announced that Bowens is back, and they’re kicking off the relaunch with the XMT500 strobe.

We are pleased to announce the Wex Photo Video exclusive relaunch of Bowens, beginning with the XMT500 Flash Head and Twin Head Kit. This is complemented by a wide range of light shaping tools, a two-year warranty and special limited-period launch offers.

The XMT500 strobe isn’t really a new product. It’s been around for a while and B&H in the USA has been heavily discounting their stockpile (for almost a year now) to get rid of them. Exactly how this relaunch in the UK will affect warranties on existing Bowens products sold in the USA or repair services for older Bowens strobes around the world is unclear, but we’ll reach out to WEX to try and find out.

For a refresher, though, let’s take a look at the XMT500 specs, and the new revised pricing. Initially, the Bowens XMT500 sold for £1,199 in the UK. The new price is a little over half of that, with a single head available for £699, and a twin head kit for £1,399 which includes a couple of extra batteries, a multi-voltage battery charger and the XMT backpack carrying case.

The specs don’t look like they’ve changed since their release the first time around in 2016.

The original price of £1,199 in the UK was pretty outrageous given the specs vs their main competitor at the time, the Godox AD600 TTL. Remember, Bowens blamed companies like Godox for their downfall. The new price is still a little higher than the AD600 TTL (which is sold as the Pixapro CITI600 TTL in the UK for £680), but the difference is much more reasonable.

The AD600 TTL still seems to be the XMT500’s main competitor, rather than the Pixapro CITI600 Pro (Godox AD600 Pro) which sells for £775. They both have quite a variable colour temperature throughout the power range, and a relatively slow recycle time. When we compare the three models…

If you already bought into the Bowens system before they declared bankruptcy, the system seems much more competitive now than it was just a few short years ago. For those who weren’t already invested in the system, whether it’s worth doing so now will depend on two things.

Firstly, you have to consider your needs. Will this do what you want it to do? Secondly, how WEX plans to expand the Bowens range going forward. At the moment, the XMT500 is the only strobe that is being released under the Bowens banner. We don’t know what will come next, or how long it may take. Godox has a very varied system now with everything from speedlights to 1200Ws dual strobe heads, at very competitive prices.

Ok, there’s a third thing. Your camera brand. Bowens triggers are available for Nikon, Canon and Sony. Godox also offers compatibility with these brands, along with Fuji, Panasonic/Olympus and Pentax.

Personally, I sold all of my Bowens kit (luckily) a few months before they declared bankruptcy along with all my Nikon speedlights to make the switch to Godox/Pixapro. I’m very happy with where I’m at with my flash gear now and I really can’t see myself ever switching back.

Regardless, it’s great to see the Bowens name back in the fight. Hopefully, though, they will be a little more innovative than they were in the past.

You can find out more on the WEX Photo Video website.