They’re calling it the world’s first user-upgradable 4K digital film camera: Blackmagic’s URSA has been announced and it may take you by quite a bit of surprise. I want to get something out of the way first: These are meant for high-end feature films and documentaries, and the two URSA models announced today are going to be shipping in July at prices of $6,000 and $6,500.

Do I have your attention now? Okay.

What you’ll find featured on this beast of a camera is a 10 inch fold-out on-set monitor, a large user upgradeable Super 35 4K image sensor, 12G-SDI, and internal dual RAW and ProRes recorders. Blackmagic makes a big emphasis on one thing in particular: user upgradeability. The sensor and lens mount assembly can be changed, so you can choose different mounts. This is big for the digital filming industry; interchangeable lenses are something we can really get used to.

One thing that makes me insanely tempted to save up for this camera is this: By connecting the output of a DSLR camera into the URSA HDMI, you’ll be able to record video in ProRes straight from the DSLR. This is a huge plus for Blackmagic, and there’s still more to back this camera up.

If you’re filming, and that shot you’ve been working hours for is happening right before the lens, you can’t have any compromises occur. The URSA makes sure that the filming is saved by allowing you to switch memory cards out in dual slots and have the filming seamlessly switch from one to the other. Blackmagic calls them Dual Recorders.

Another feature that catches my attention is the 10-inch touch screen that comes with the URSA, which makes for a great portable viewfinder, and two 5-inch screens on the sides of the camera itself. Blackmagic is going for one significant goal with this camera: versatility. 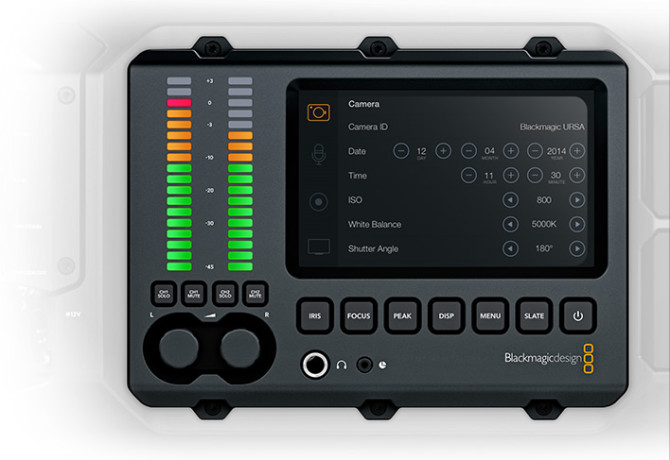 Here’s the full specs for the camera, courtesy of No Film School:

The Blackmagic URSA will come in two different editions for now: the EF variant, and the full-size PL variant, at $6,000 and $6,500 respectively. Wrapping it back to the beginning, the price for this camera is one of the things that makes it so astounding. The reason I even bought a DSLR was because it could shoot video, and it gave me an inexpensive way to do so. The URSA changes that. It’s a giant step for the filming industry in becoming more accessible to consumers, and that means it’s getting easier for people to pursue their creative goals.

[Blackmagic URSA via No Film School]