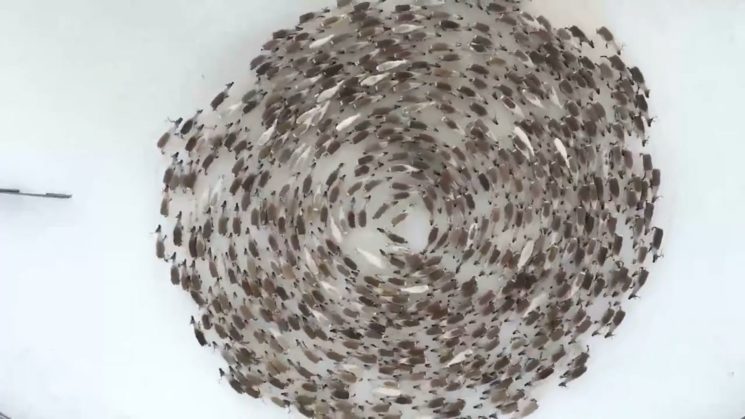 I’ve heard of cyclones, I’ve heard of reindeer, but a reindeer cyclone? This is totally new to me. But it’s a thing, it looks incredible, and a drone pilot managed to capture this phenomenon from above. Science girl posted the video on her Twitter account, explaining what stands behind this unusual behavior.

Reindeer Cyclones are a real thing… a swirling mass of threatened reindeer stampeding in a circle making it impossible to target an individual.. here the fawns are in the middle

This herd is on Russia’s Kola Peninsula, in the Arctic Circle
pic.twitter.com/0Y2UwBKuOh

Science girl writes that reindeer behave this way to make it impossible for predators to attack individuals. In the middle of this “cyclone,” there are fawns, the youngest and the most vulnerable of the herd. The footage was taken by photographer Lev Fedoseyev on Russia’s Kola Peninsula in the Arctic Circle. Google wasn’t of much use when searching for his website or Instagram to link.

But I did find this story, also shared by Science girl in the Twitter thread. It tells more about this behavior in reindeer, which can also be observed in other species. It was captured in PBS’s show Wild Way of the Vikings when reenacting the scene of a Viking hunting reindeer. An actor released an arrow and the reindeer started running in a circular motion. The footage revealed that the herd’s momentum follows a spiral shape. What’s also interesting is that the animals run “invariably” in a counterclockwise direction, according to this source.

Similar behavior can be observed in other species, and most of us are familiar with fish swarming together to defend themselves from predators. But as I mentioned, I didn’t know about this kind of behavior in reindeer, and other than being fascinating, it also looks magical from above. Have you heard of it before?