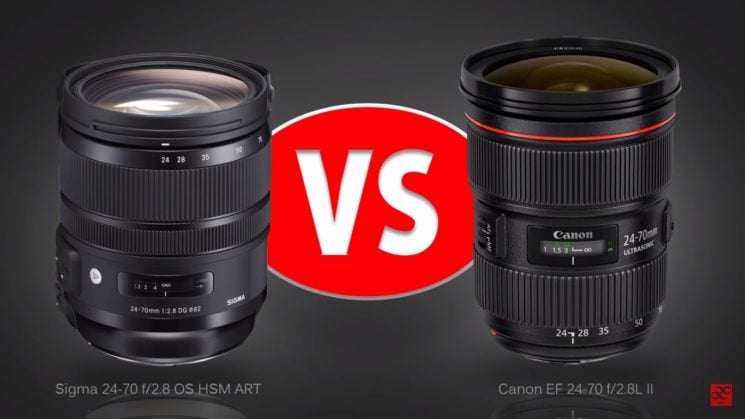 If you’re in the market for a 24-70 f/2.8 lens for your Canon camera, there are a few options available. In this video, Matthew Gore goes in-depth about the similarities and differences between Canon 24-70 f/2.8 L II and Sigma 24-70 f/2.8 ART. Both have a good reputation, and the price difference isn’t really big, which makes the decision not so easy to make. So, if you’re having second thoughts which of these to choose, this video could answer some of your questions and help you decide.

Physically, both lenses look similar. However, Sigma is significantly heavier (1020 g/2.24 lbs vs. 850 g/1.8 lbs). Both lenses are weather sealed, and both have a maximum magnification ratio of about 1:5. The position of focus and zoom rings are reversed. But, unlike Tamron, they turn in the same direction on Sigma and Canon.

To test the resolution and sharpness, Matthew shot with both lenses in the same conditions: shooting RAW with a Canon 5DS R. The camera was on a tripod with the center column down, mirror locked up. Image stabilization was off and he focused using live-view. He used a remote release and processed the photos as 16-bit files in Photoshop. There was no lens correction or sharpening applied in Adobe Camera Raw or Lightroom. Here’s what he concluded:

24mm, edges of the frame: Canon is quite a bit sharper at wide apertures, and you can see the improvement on Sigma side at about f/5.6. Although, you need to be a hardcore pixel peeper to notice the differences at f/5.6 or f/8. Near the edges of the frame, there’s some fringing and chromatic aberration on the Sigma lens.

70mm, the center of the frame: at f/2.8 Sigma is only slightly softer than the Canon. Starting at f/5.6, both lenses are practically identical in terms of sharpness.

70mm, edges of the frame: at 2/2.8, there’s more detail and all edges are nice and sharp with the Canon lens. The difference is obvious at this point, but this time, the Sigma still doesn’t approach the Canon even at f/8.

To sum up, Sigma starts losing some sharpness near the edges of the frame, which is particularly noticeable at wider apertures such as f/2.8 or f/4. However, the center of the frame is sometimes even a bit sharper with the Sigma than with the Canon lens, although it depends on the situation.

After shooting on a tripod, Matthew tested the lenses for everyday, general shooting. And he says that the Sigma performed just fine: he had no problems focusing, even in strong backlight or dark passageways. The AF was fast and responsive, and he was satisfied with shadow detail he got in tricky light. As for the colors and overall rendering, they were also good with the Sigma. For landscape photos, it gave nice, contrasty images, with sharp details. As for shooting handheld in low light, Sigma won over Canon here. The image stabilization always gave better results than shooting without it, while the Canon images are mostly pretty blurry and unusable. 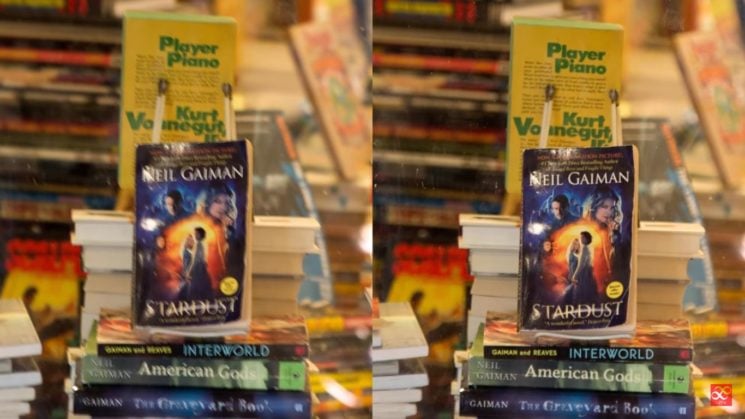 Canon on the left, Sigma on the right, shot handheld at 1/15 sec

To test out how both lenses perform for action shots, Matthew shot a series of girls’ basketball games. Most of them were played in poorly lit high school and middle school gyms. And this time, Sigma performed significantly worse than Canon.

When the players weren’t moving, the focus on the Sigma lens was pretty reliable. However, when he tried to track moving players, Matthew had a terrible time getting sharp shots. Sigma was just struggling to follow the players. The biggest problem with this lens was that, every time he would zoom in while tracking, he would lose focus.

As his conclusion, Matthew writes:

“The Sigma ART lens did not focus quickly or reliably enough to be used for sports and action photography with my camera, even though all of the previous Sigma lenses I’ve tested have been just fine.

Focus was accurate for stationary subjects, and tracking was sometimes functional for moving subjects, but never while zooming.

Keep in mind that autofocus performance depends on the lens and the camera, so even though I had problems, you may have different results if you shoot Nikon or a newer Canon body.

On the assumption that my experience is typical, I’d recommend Canon or Tamron version of the lens to anyone who shoots sports or events.”

When it comes to vignetting, both lenses show more or less the same performance. At the 70mm end, the difference is negligible. At the 24mm end, the Canon lens is about 1/2 stop darker in the extreme corner, but it’s still an insignificant difference. 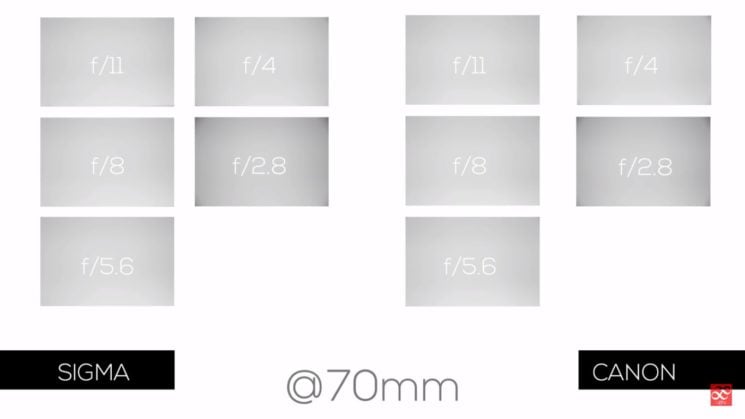 Although image stabilization can make a big difference in image quality, Matthew says that the Sigma’s resolution didn’t live up to his expectations for an Art series lens.

In addition, the significant AF struggles make the Sigma lens hard to recommend over the Canon, especially with the price difference of only $300.

I think this little chart paints a pretty clear picture of how the two lenses compare, at least judging from Matthew’s experience: 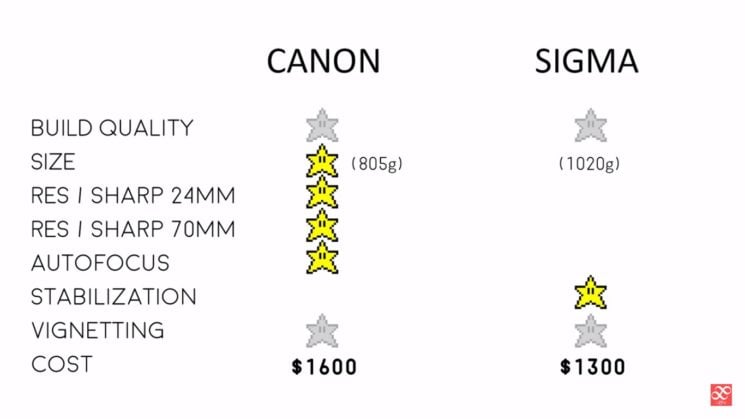 Of course, even though Matthew did his best to test the lenses objectively, he points out that this is still his own experience and this is how the lens performed on his camera. Generally speaking, for a $300 difference, he recommends that you go with the Canon lens after all rather than the Sigma. Or, go with the Tamron version which is $500 cheaper than the Canon.

In case you own some of these lenses, let us know what your experiences are. Do they differ from Matthew’s, or you’ve noticed the same issues?