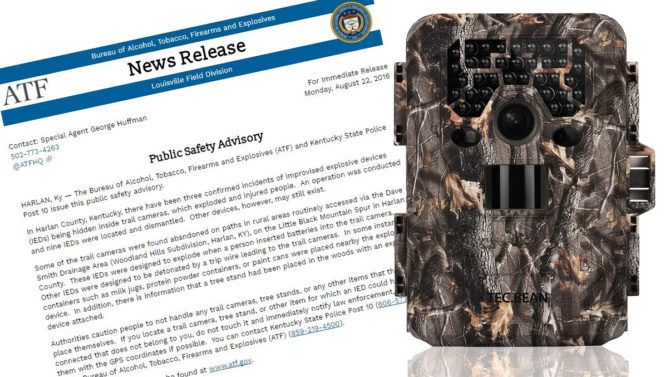 Well, this is messed up. A warning has been issued that IEDs have been found in Harlan County, Kentucky. The IEDs in question are hidden inside trail cameras. So far, nine such devices have been discovered. Sadly, some have already detonated, permanently injuring at least one member of the public. But officials believe there are more out there.

Outdoor Hub reported in June that cameras were being investigated. Initially suspected that the explosives were a way to deter thieves, the reality ia a little more sinister. The Lexington Herald Leader reported that after a man lost several fingers in an explosion, police arrested Mark Sawaf after materials connected to the IEDs were found in his trash. A note found amongst evidence found at the home suggests he didn’t want to just deter thieves, but maim or even kill them.

One can easily understand the frustration of stolen equipment. Trail cameras aren’t necessarily that expensive, but if stolen regularly, it adds up very quickly. There’s also the lost images and footage contained within them. Losing that is often a bigger blow than losing the camera itself. But strapping explosives to them is a bit extreme. It’s also illegal in most parts of the world (including Kentucky).

The note found in the evidence read “broken camera for a broken soul”, according to court files. The Lexington Herald Leader says that when interviewed, Sawaf said he wrote the note to put into a broken camera which he would leave out for somebody to steal. He was actively baiting thieves into stealing the cameras. With a note like that, though, anybody could stumble across it.

According to Outdoor Hub, Sawaf agreed to help police find the remaining devices, but was shot and killed while trying to escape custody.

Now, the ATF and Kentucky State Police Post 10 believe more devices are still out there. They have issued a warning to be on the lookout. If you see suspicious trail cameras, do not approach them. 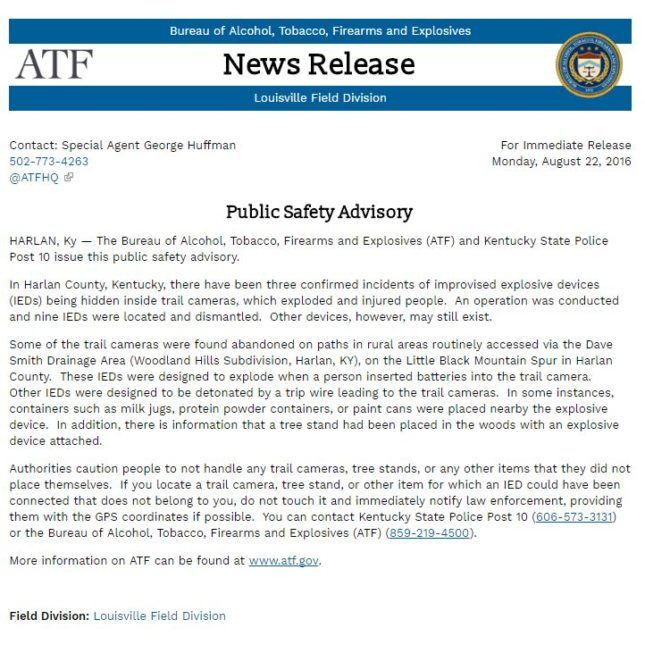 Some will say that any camera thief who discovers and takes these bomb-laden devices will deserve everything that happens to them. I agree they need to learn a lesson, although I think this might be a bit too extreme.

The worrying thing is the innocent members of the general public who may now discover these devices. There’s no telling how many more are out there, of when they’ll make an appearance.

Do you use trail cameras? Is there a problem with camera thieves in your area? What do you do deter them? Or have you just accepted that one day you may turn up and it’s no longer there? Do you think the thieves deserve whatever that happens to them? Or is the risk to the innocent far too great? Let us know your thoughts in the comments.

Police Detectives Mistake Camera-Stabilizing Rig For A Drone; Warn Crew Not To Fly It

« Olympus PEN-F design story: Timeless enjoyment
If you’re shooting flash outdoors, your colours are probably wrong. Here’s how to fix it with gels »