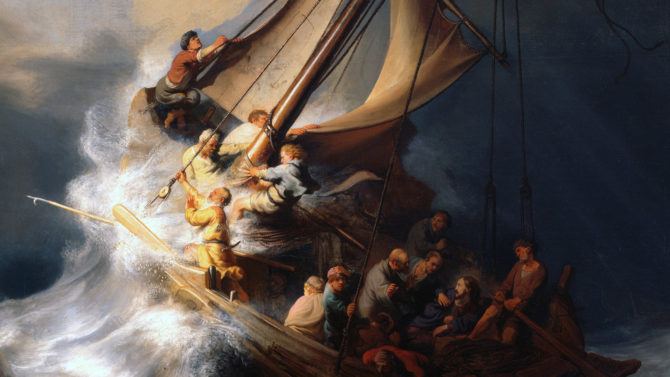 Whether the work we create is digital, or a little more tangible, it’s an inevitable consequence that some of it will be lost or destroyed.  In this short series of videos released by Adobe, we see four of them recreated using Photoshop and stock imagery.

Rembrandt’s The Storm on the Sea of Galilee went missing in 1990 after thieves disguised as police officers broke into the Isabella Stewart Gardner Museum and stole an eximated $500 million worth of paintings.  In this video, we see it recreated digitally by digital artist Ankur Patar.

Patar was challenged by Adobe to make it look as close to the original as possible. The recreation required 247 images from Adobe’s stock library and took 20 days to complete.

Patar is not the only artist Adobe commissioned to recreate a masterpiece.  Retoucher Karla Cordova was tasked with recreating Frida Kahlo’s The Wounded Table.  While the original painting vanished in 1955, three photographs of the painting had been made between 1940 and 1944.

Jean‐Charles Debroize recreates our next masterpiece; Caravaggio’s Saint Matthew and the Angel, destroyed in 1945 while housed in the Kaiser Friedrich Museum, now known as the Bode Museum, in Berlin.

This last one has to be my favourite, recreated by digital artist Mike Campau. Karl Friedrich Schinkel’s Cathedral Towering over a Town, destroyed by fire in 1931, is full of amazing intricate detail.

I can’t even begin to imagine what a headache just sourcing suitable images would be for something like this, let alone the amount of time and effort that obviously went into creating each of these within Photoshop.

So, admire the beauty, get inspiration for creating your own work, or let them give you motivation to better your Photoshop abilities, but watch the videos.

Have you ever tried recreating the work of others in this or a similar way?  Let us know and show off your work in the comments.

This 52,000MP Panorama Of Seattle Is An Artists Treasure Hunt