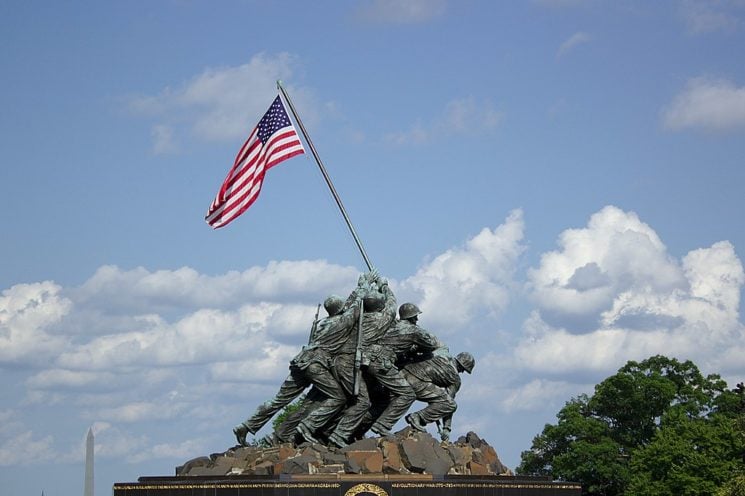 The Taliban unit has published a photo that shows a group of soldiers raising a flag together. Sounds familiar? It’s a recreation of the iconic Joe Rosenthal’s image, depicting six U.S. marines raising the country’s flag on Iwo Jima in World War II. However, the Taliban version was reportedly made to mock the U.S., which has sparked a lot of rage across the country. Still, things may not be as they seem at first, and some sources claim that the photo was photoshopped.

As you have probably heard, the Taliban have taken control of Afghanistan amid the withdrawal of the U.S. forces after 20 years of war. According to the New York Post, the staged image shows the members of an elite unit known as Badri 313 Battalion raising the Taliban flag. The soldiers are wearing the American equipment, and the image was reportedly made to mock the U.S. and as a part of Taliban propaganda.

However, reading some comments on the image, it may not be exactly as it seems. Some people say that the photo has been circulating for a while. But instead of the Taliban flag, the original showed the Afghanistan flag. Many netizens claim that they’ve seen the image before. Some of them note that the flag looks photoshopped if you take a closer look.

If it was photoshopped, we have to stop for a moment and ask ourselves why and by whom. I think we’re all emotional about topics like this, and media or PR often use doctored images to play with our emotions. So, I’ll use this photo as a reminder to always fact-check and to think rationally before we raise the pitchforks and torches.

Personally, I have no idea if the photo is doctored or not, as it’s too blurry for me to see enough detail. If you can see more than I can, please do share your opinion as I still haven’t found the official confirmation.

[via The Independent; image credits: Brandon Sorensen, CC BY 3.0, via Wikimedia Commons]

Watch the iconic “The Simpsons” intro recreated with stock footage