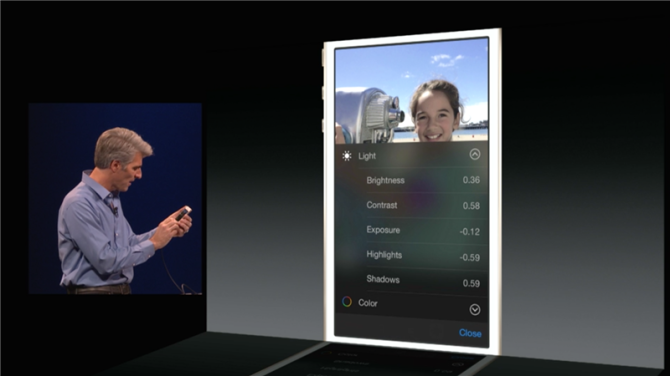 Apple products: love them or not, there’s no denying that they’ve made a tremendous impact on photography today. If you don’t own an iPhone, chances are you most likely own a Mac. If you own neither then you’re in more of a minority than you’d think. Considering how important the company’s become to the photography world in general, the news that came out of Apple’s WWDC keynote today is set to make another mark in how many of us deal with our work. As I’m writing this post, Craig Federighi of Apple is wrapping up the announcement of the new iOS 8. Both the mobile operating software, along with the new update to Mac OSX, were both just recently introduced at the keynote, and the changes they’re bringing to how we work with photos on our Apple devices are far overdue.

Let’s start with the iPhone, which is at the moment the most popular camera in the world. With the upcoming iOS 8, the official Camera app gets its own editing utilities, along with automatic picture straightening. With the tools popping up at the top of the photo, the lighting and color dials are placed at the bottom, controlled by sliding the bars from one side to the other. With the official Camera app getting its own in-app editing service, the news can potentially prove troubling for some third-party photography apps out there; if Apple has one thing right, it’s the quality the company puts in its user interface. Everything just works, and you can compare the results of panoramas taken from an iPhone with those taken from any other smartphone at all to see the difference.

One other major development to come out of iOS 8 is that every photo taken with your device will automatically be available on all your devices. This is huge for people that keep their information in an Apple ecosystem. When I used to own an iPhone, one of the biggest complaints I had with it was the fact that I would have to constantly back it up in order to make sure my photos were on other devices. With digital photos essentially being the default medium in how we store our photos now, this development is great for people that want to preserve them. There’s a good amount of older people that use iOS devices that may not be too used to backing up their work as much as they should be, and they won’t have to worry as much about that when using this feature. With how popular its devices are, it’s nice to see Apple integrate the simplicity so well in the lives of its customers; they’ve been doing it since the introduction of the iPhone back in 2007, and they’re still proving that it’s something important to them.

Speaking of simplicity and easiness to use, that basically means you’ll never have to see iPhoto again. Along with the fact that it’s no longer the default for synchronizing photos to your Mac, Federighi goes on to talk about Apple’s plans for next year: with what they’re working on for iCloud, they’re preparing to make a releaser that’ll ultimately replace iPhoto itself. Considering how both iOS 8 and the new OSX are starting to phase out the crippled software, it might be safe to say that Apple’s realized it caused us nothing but pain. So don’t hold back those tears. Let them out, because it’s all over; iPhoto can’t hurt us anymore.

The other big announcement that apple will finally provide both manual controls and total access to third party apps. This means that you will be able to control ISO, aperture and shutter speed from within the camera app, but maybe more importantly, it means that you can now replace the camera and gallery apps altogether with your favorite without forfeiting any of the features. On notable such change is that you will now be able to delete photos from other apps, not just from apples photo library.

Apple’s not the most technologically advanced company out there for photographers – and they’re definitely not the standard for professional photography work, but they’ve been responsible for bringing millions of people into the world of photography by simply helping them start off with it. Photography isn’t just a lively industry today; it’s at its most creative point ever, and many of the creative ones out there probably wouldn’t have gotten there had they not started off snapping shots from their smartphone.

« Sigma 50 Art Lens Compared With The Canon 50mm F1.2L
What Else Happens When the Photographer Becomes the Client »