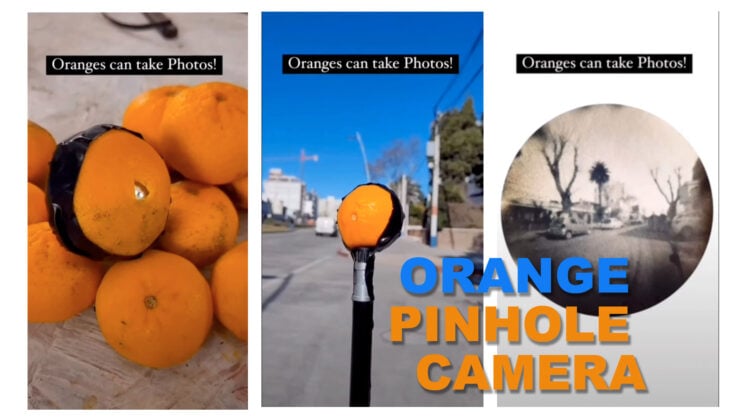 Oranges can take photos! Well, actually, they can’t, but you can use an orange to take photos. In fact, you can use pretty much anything to make a pinhole camera, the concept is exactly the same. A camera is merely a light-proof box with a hole to control the light entering (the pinhole in this case).

This fun video posted to the sub-Reddit Be Amazed shows you exactly how to prepare and use an orange as a pinhole camera.

Oranges can take photos. from BeAmazed

There are no instructions that go with the video. However, we can deconstruct it as it’s the same as any pinhole camera. First, they cut the orange in half and squeeze out the juice. Then, some film or light-sensitive paper is put inside, along with some tape that you can make the pinhole in.

Now you just have to tape the two halves of the orange back together, mount it on a light stand, and hey presto, you have a small orange for a camera! It’s bound to draw some looks if you’re out in the street with this.

Living where I do, I’m quite tempted to try it, seeing as oranges are so ubiquitous here. Incidentally, here’s a fun orange fact: Valencia oranges are currently grown in Spain, however, they actually originated from California and are a hybrid which makes them extra sweet and juicy.

I don’t know yet how good they are as cameras though, I don’t believe they were bred with that in mind! What’s the strangest thing you’ve ever made a camera out of?

BeReal is developing a new feature for discovering friends of friends