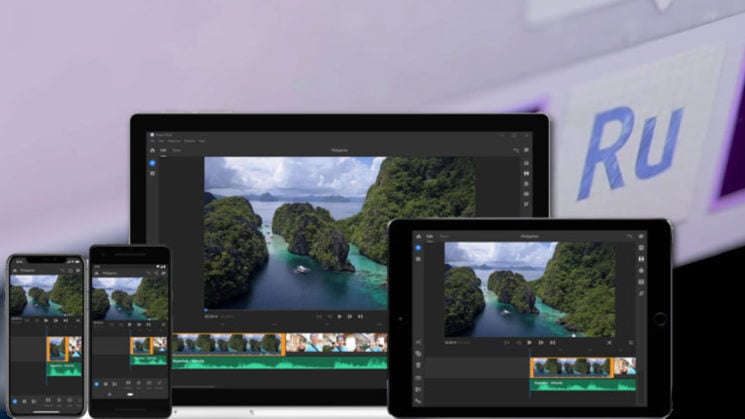 One of the biggest challenges for people regularly posting to social media is editing videos. Either you shoot while you’re out and then edit when you’re back at home, or you have to carry around a laptop with you the whole time. Project Rush, squarely aimed at YouTubers, Vloggers, and other social video posters, plans to fix that.

It’s sort of an extension to Premiere Pro, but also sort of not. It’s its own application which appears to primarily use Premiere Pro as its “engine”, with a little After Effects thrown in. The app allows you to easily transport footage and projects between Android, iOS, Windows and Mac platforms, all synced up in the cloud, with apps for each to give you simplified on-the-go video editing.

Being able to start projects on a phone or tablet on your way home means you don’t have to carry a laptop with you, saving valuable weight and space in your bag. Then, once you do arrive home, you can fire that project up in full-blown Premiere Pro and keep on editing. Need to make a quick change while you’re out? No problem, fire up your phone, tweak and you’re good to go.

The whole idea of this is essentially what people hoped the whole “Creative Cloud” concept might have been from the start – I mean, given the name and all. But it’s finally here for video editors.

While it does seem to be aimed primarily at YouTubers and social video creators, as evidenced by the presence of Shameless Maya in the video above, it’s not a bad idea for many filmmakers. You finish filming, you can start transferring footage over to your phone or tablet and the cloud, and then start getting your first cut together on the way home (assuming you’re not driving).

Project Rush will become available later this year, although Adobe hasn’t said exactly when later is. But, if you can’t wait, you can sign up to apply for the beta on the Adobe website.

Hopefully, we’ll see something similar come at some point from Blackmagic and Apple for DaVinci Resolve and Final Cut Pro, too.

« Photographer claims American Airlines lost her $13,000 worth of gear
Singapore photographer busted for sharing stock photos as his own »