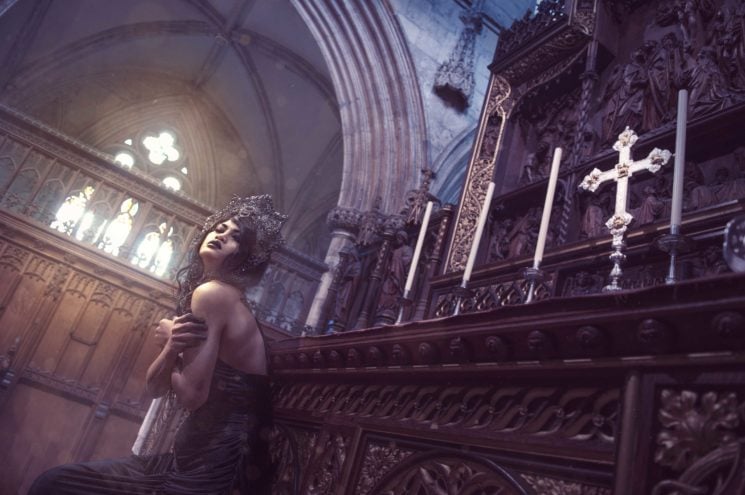 This week we will be looking at adding style to your natural light photographs. Recently I have shot against my usual style, which is off camera flash. The reason for this being I want to challenge myself to shoot in different circumstances and to gain more experience when not using flash. The image above was a commissioned client shoot. The location was Selby abbey. It wasn’t the planned location, but hey, when you stumble upon a location this good, you gotta use it. And when you have an amazing selection of headpieces from Creations by Liv Free  to use, we probably couldn’t have unplanned it any better haha. As you can probably tell the image didn’t pop out of the camera looking like it does above. I wanted to take natural light photography and infuse it with my own style. So let’s get into how I did that.  Here is how the image came straight out of camera. 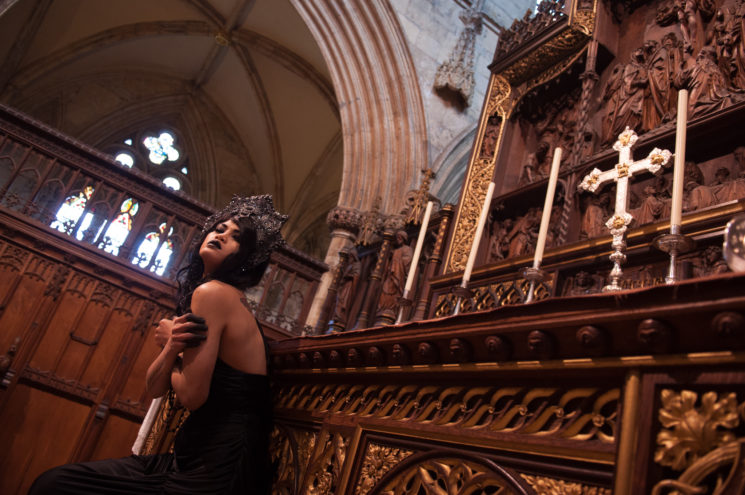 As with every image, first, we need to clean up. Nothing too intense on this shot just a few blemishes here and there. It was then straight on to the dodge and burn. I used a curves dodge and burn to enhance form and features. 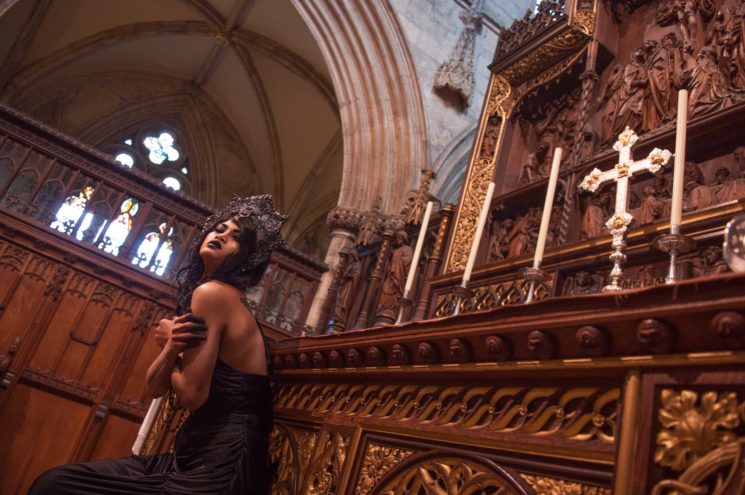 Take your time whilst editing to pause and have a think about what you want to enhance or manipulate. After having a quick think I decided I wanted to enhance the light coming from the window. I did this by creating a curves adjustment. I pulled up the midtones and then added an inverted mask. With a low opacity brush, I then painted in the brightness. 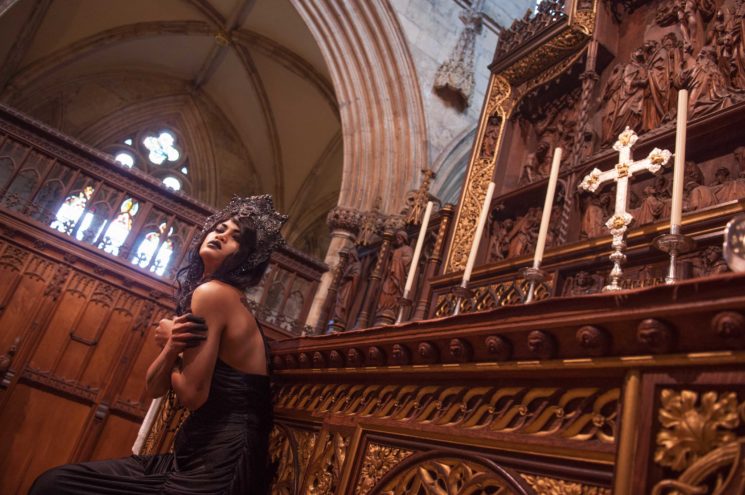 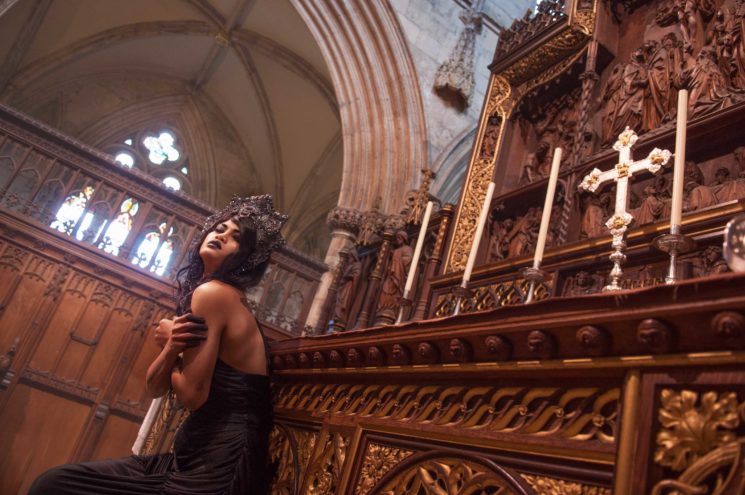 Now I want to focus the viewer’s eye away from the right side and keep it on the model, so with a curves adjustment layer, I darken the right edge creating a vignette of sorts. 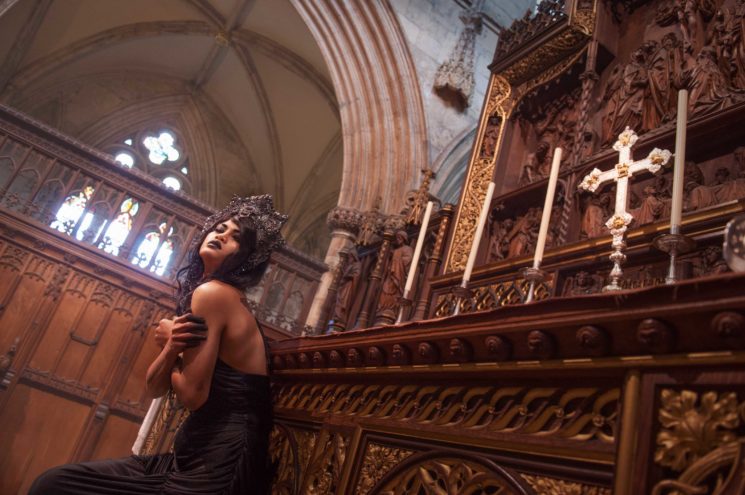 With areas of contrast looking better, next, I add the base color tone from which I will build upon. I did this with a gradient map using purple and blue colors. I chose these colors because I wanted the image to have a moody atmosphere. 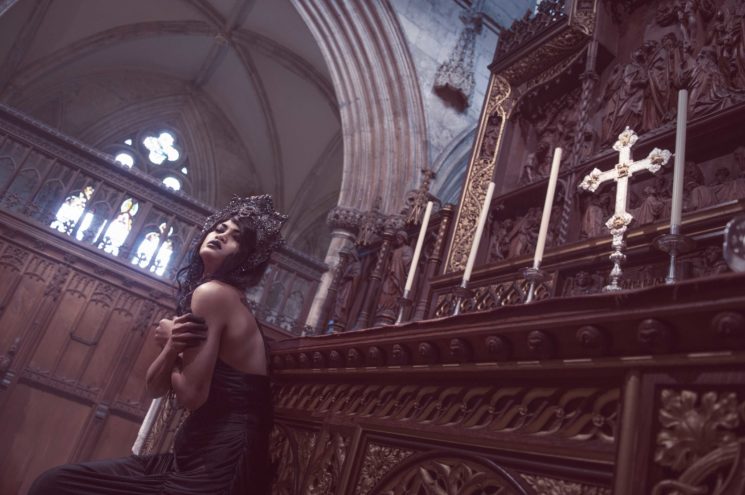 Looking at the image I like the feel now but I wanted to add a little color contrast and focus to the model’s side of the photo. I decided I would do this by adding sun light coming through the church window. To do this I used a color balance adjustment layer. Switched it to highlights and pulled up the yellows and a little red. I let some of the colors bleed into the model’s highlights on the side towards the window as if it was rim light. 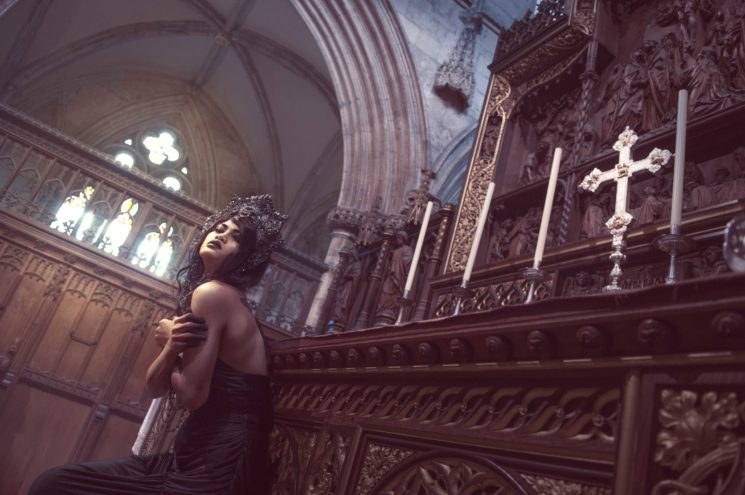 Now I had the yellow/orange color, I wanted to enhance the color contrast by making the right side even more blue/purple. Again I did this using color balance. Instead of the highlights though I did it to the midtones and shadows. 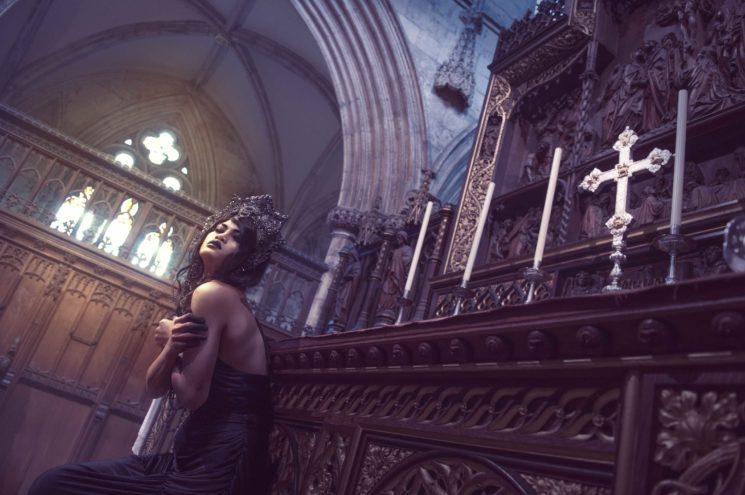 This next part won’t be for everyone but I decided I would add some particles like sun flare from the dust in the air. To create this effect I downloaded some particle textures from the Raw exchange. All I had to do was bring the texture into my layers palette and blend them in using screen blend mode. I can then move them into place wherever I want. 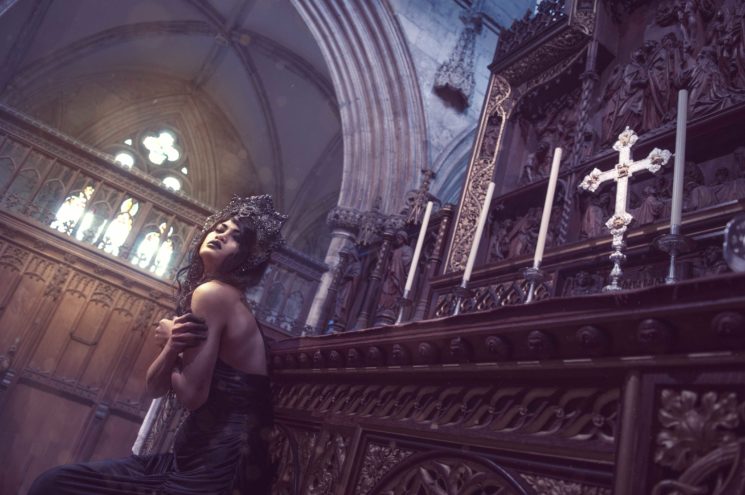 Now to add even more atmosphere to the image I decided to add some light rays from the window, and even brighten the window up a touch more. Again with curves I just pulled up the highlights, added an inverted layer mask and painted in the effects with a low opacity brush. 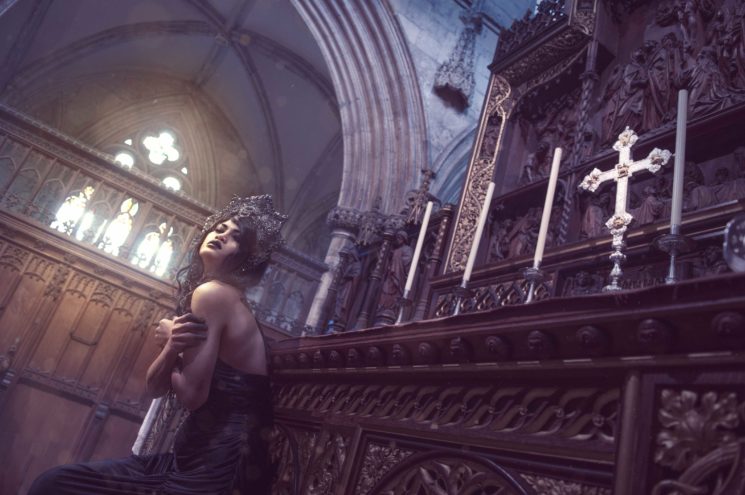 Finally, it was looking somewhere near finished. So I added some sharpening to the image, only on the model, again to focus the eye towards her. To do this I use Topaz Labs detail plug in. It’s a plug in I always use for sharpening as it some really good features. For this image, I only need slight sharpening, so I only used the small detail slider. Lowered the layer to 80% and then on an inverted mask painted in the sharpening on the model only. 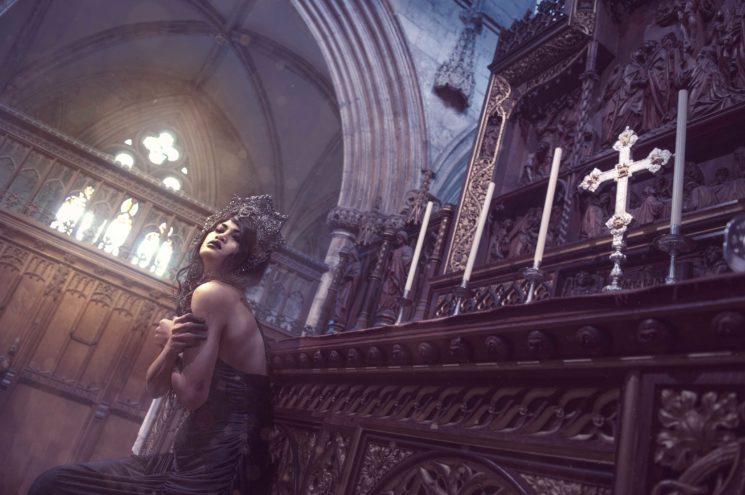 And finally with one last curves vignette to focus the eye we are done.

Thanks guys, I hope you found this helpful. Any questions, leave a comment.