I use a lot of AA batteries.  So many in fact that finding them all and getting them charged up for a gig has become a significant bottleneck in my workflow.

I have finally realized that it is time for a more sophisticated system to actually manage all of the batteries that I need – as opposed to the old system which mostly consisted of pulling batteries out of my kid’s toys, TV remotes (or wherever else my AA batteries had migrated to) and then shoving them into ten different chargers the day before a big shoot. 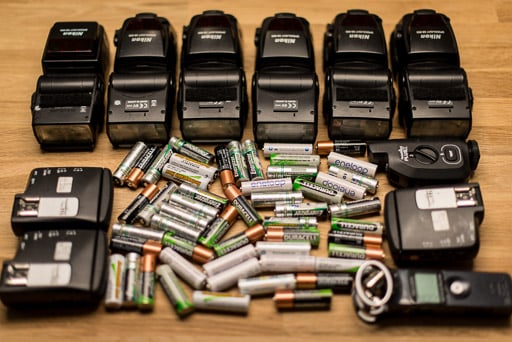 The above photo is all of my photography accessories that take AA batteries.
Here is a quick breakdown:

So in total, I need 33 AA batteries charged and ready to rock before I leave the studio.

Of course, I don’t always use six strobes for every gig.  But three or four would be typical for me, so I am going to plan my AA battery strategy based on using four strobes.  That still results in a minimum of 25 AA batteries.

And then there are backups.

I am OK without having dedicated backups for the Pocket Wizards and the recorder, they are all pretty light on power usage.  But, I defiantly want a set of backup batteries for the strobes – so if I’m planning on using four strobes, that adds another 16 AA batteries.

In total that works out to a minimum of 41 AA batteries!

Over the years I have collected an ad hoc assortment of rechargeable AA batteries and chargers.

I have about twenty four Energizer 2450 mAh rechargeable AA batteries (about half of which are AWOL) and an 8 bay charger that I have been using for years.  A lot of the Energizer batteries no longer take a charge and the ones that do are becoming unreliable.

The Energizer batteries are also older technology, and they don’t hold a charge for very long – meaning they need a full fresh charge every time you use them.

Of course that also means that these batteries often migrate into other devices when they’re not being used for photography, and I have to go searching for them.

I also have eight Sanyo 1900 mAh Eneloop rechargeable AA batteries and a four bay Sanyo charger.  The Sanyo charger is a slow charger and I usually have to leave it overnight to completely charge a set of batteries.

So with my current system, I have 44 AA batteries available, but the problem is that I can only charge 16 of them at a time – which means that I have to start charging batteries days in advance, which is a royal pain in the butt.

I am going to re-appropriate the Duracell 2000 mAh batteries and charger to household accessories – which is where most of them end up anyway.  Since they hold a charge for a long time, they are good for things like TV remotes, computer accessories etc.

The 2450 Energizer batteries are unreliable right now, but I think that most of them can probably be reconditioned.  I am going to send them to work in the salt mines (ie. kids toys).

The Sanyo 1900 mAh Eneloops are solid.  But I can only charge four of them at once, and they take all night with the factory charger.

They are also only 1900 mAh, which is fine for PocketWizards, but for strobes, more current equals faster recycle times, so I would prefer to upgrade to the newer

If you haven’t heard about Sanyo Eneloop XX batteries, they sound pretty awesome.  Here is a quote from Sanyo’s website:

eneloop XX – For Professional Use

°C) is needed. The eneloop XX Nickel Metal Hydride batteries retain up to 85% of their capacity even after one year of storage.

They do cost a bit more than other AA batteries, but I would rather spend a bit more on the best AA batteries I can find than be stuck with dead gear on a shoot.

The big box store battery chargers that I am using right now are not terribly sophisticated.  They charge batteries in pairs and stop charging once the first battery in the pair reaches its peak charge – meaning that you always end up with 50% of your batteries that are mostly charged, and over time this leads to a long term gradual reduction in the maximum charge that each battery can take.

Smart chargers on the other hand charge batteries individually and analyze each battery to make sure that it is charged to peak capacity.

Smart chargers also have different charge rate settings.  In general the slower batteries are charged the better it is for their long term health.  But sometimes you jus

A Managed System for AA Batteries for Photography

For the Pocket Wizard’s, I am going to stick with the eight 1900 mAh Eneloop batteries that I already have.  Except, I am going to pair them with a dedicated 8-cell smart charger. 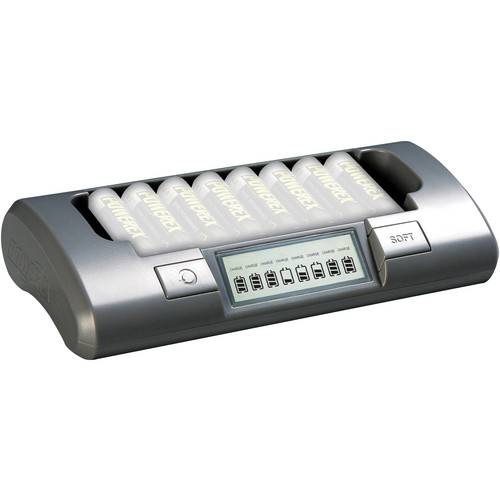 For the strobes, I am going with sixteen new 2500 mAh Eneloop XX batteries, paired with two dedicated 8-cell smart chargers.

For strobe backups, I am going to use another 16 new 2500 mAh Eneloop XX batteries, which will be charged in the two 8-cell smart chargers, once the primary batteries are done.

In total, that will give me 40 batteries and the ability to charge 24 batteries at once.

Down the road I might pick up another two 8-cell smart chargers so that I can charge everything at once.

In order to recondition my older batteries, I also picked up a AA battery Charger-Analyzer. 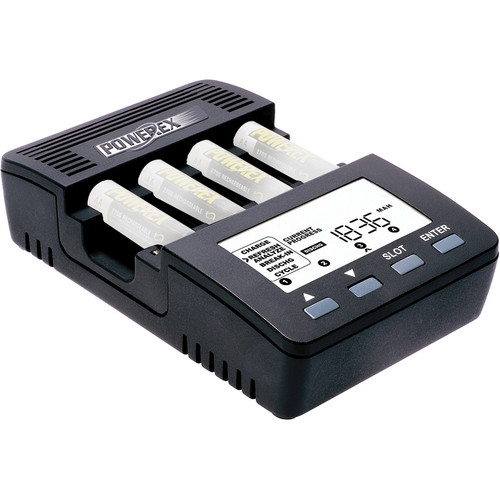 A charger-analyzer is even a little more sophisticated than a standard smart charger (which is still way better than a run-of-the-mill big box store charger).

Those Sanyo Eneloop XX batteries are expensive, so I figure it will pay to take care of them in the long run.

How Many AA Batteries Do You Use?

How many AA batteries do you use for your photography accessories?  How do you manage AA batteries?  Leave a comment below and let us know!

Start Up Promises To Charge All Your Batteries In 2 Minutes