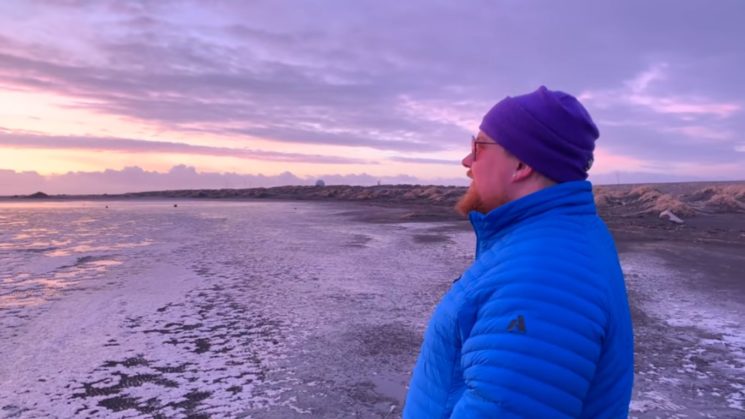 There are quite a few colorblind photographers out there. While this doesn’t stop them from creating fascinating photos, it doesn’t come without its challenges. Canadian photographer David Wilder is colorblind and it was only recently that he saw full colors for the first time. His friend Rachel Jones Ross filmed his wonderful reaction as he put EnChroma glasses and discovered full colors of a sunrise. You can watch it in the video below, but be warned: you might need a tissue. I know I did.

David recently wrote an article about what it’s like to be a colorblind photographer. As he explains in a follow-up piece, guys from EnChroma read his story and contacted him, offering him a pair of colorblind correction glasses. David accepted, and when the glasses arrived, he resisted the urge to put them on right away. I can only imagine how much willpower it took, but he wanted the moment to be special. And indeed, it was.

As it was winter in Canada, the skies were gray and dull most of the time. So, David waited until he went to Iceland with Rachel. After chasing the Aurora all night, the sun started to rise. Rachel asked him if it was time to try the glasses, and yes, it was the perfect moment.

David writes that he was nervous about putting them on: “I stood there, thinking: ‘what if they don’t work, or what if I am scared to take them off?’” But then he put them on, and all of a sudden, he saw colors that he had never seen before. Rachel filmed this special moment, and it’s really moving and wonderful to watch.

“We both were so enchanted by the moment we forgot that we were out there to take photos,” David writes. He adds that he took a few photos after Rachel stopped recording, and you can see one of them below.

After taking a few photos, David just sat there and enjoyed the colors of the early morning sky. I enjoyed watching his sincere reaction to something most of us take for granted. It made me cry and smile at the same time. Make sure to watch the video above, and you can check out more of David’s work on his Instagram.

[Seeing sunrise colors for the first time via FStoppers]