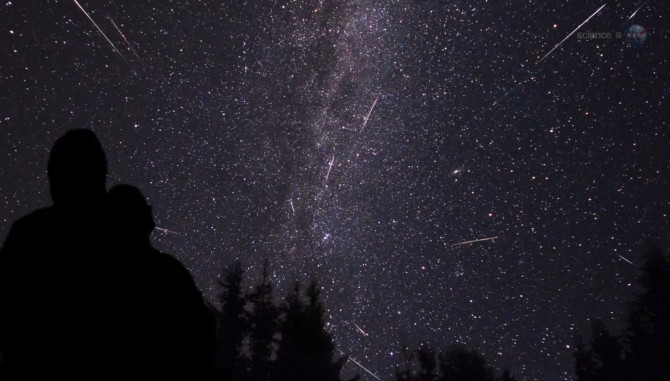 While we’re usually given a fairly early warning on when to expect an eclipse in the sky, or a meteor shower in the middle of the night, this is a pretty different situation. According to NASA, there’s a meteor shower headed our way late tonight – Friday- into Saturday Morning; the shower itself has never been visible to us before. It’s an entirely new swarm of meteors; remnants of a comet called the Camelopardalids.

The Camelopardalids was discovered in 2004, and returns to make a trip past the Earth every 4 or 5 years in its orbit around the Sun and Jupiter. The shower we see tonight is completely unpredictable in what it will actually be like; considering this is the first time we’re discovering it, we have no precedent to go off of on how it will be.

So what do we know? Well, according to NASA, North America’s going to have the best view. Meteor showers are a lot more common than eclipses, so if you don’t live there, sit back and keep patient for now! As for those who plan to stay up, expect the best view at around 2 to 4 AM Eastern time on Saturday – which is tonight. Concerning how many meteors you’ll actually see shooting by, the numbers are weird; some sources say 30 to 100 per hour, while others are going with around 200 to 1000. Either way, all will be revealed tonight, and the best way to find out is to step outside and look up.

If you’re looking to shoot the event tonight, check out the feature we had yesterday covering a few tips you might be able to use.

For more information on the meteor shower, check out National Geographic’s coverage for a detailed reading.

For those of you planning on shooting, how do you plan on setting up? Want to share a few tips from experience? Drop by and post what you’ve got to say, and good luck!

A Picture of This Week’s Meteor Shower from Space Itself

« Selfies From Nature – What If Animals Took Selfies?
Linkin Park Reaches Out to Live Photographers, Launches Contest to Shoot for Their Tour »