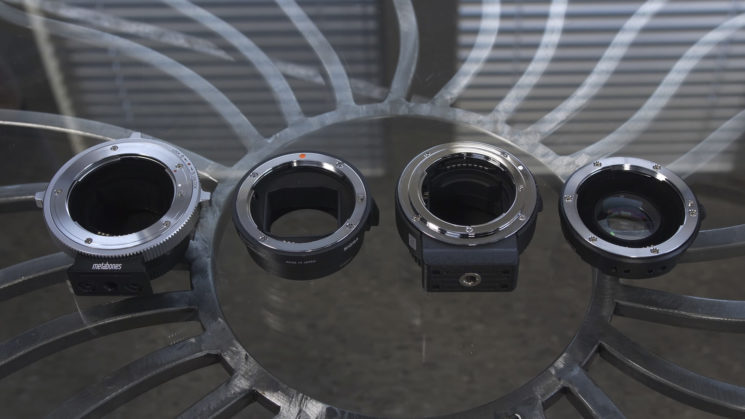 One of the things that’s put a lot of people off making the switch to mirrorless is a lack of lenses. The lack of lenses isn’t much of a surprise. How can new system like Sony’s E Mount or Micro Four Thirds really compete with the decades old Nikon and Canon systems where every lens has been made and revised half a dozen times or more?

That’ll change a little for Sony users with Sigma’s new E Mount lenses, but there are other options. Lens mounts are available for both Sony and Micro Four Thirds systems that allow you to utilise Nikon and Canon lenses on those systems. In this video, Chris Niccolls from The Camera Store TV walks us through the range and capabilities of current adapters in 2018.

In an ideal world, we wouldn’t have to adapt lenses from other systems. But even when lenses are plentiful, it still happens. When Canon first started introducing video to their DSLRs, many video shooters were using adapters to mount Nikon and M42 lenses onto Canon bodies. And quite a few still do that to this day. So, it’s not a new concept that’s come with mirrorless systems.

Chris looks at a number of different lens adapters in the video, and goes over some of their pros and cons to help you decide which ones are worth buying in 2018. Some are getting a little long in the tooth now, while there are new ones coming out that are able to take advantage of newer technology.

To test the adapters, Chris uses the Sony A7RIII, Olympus OM-D E-M1 Mark II and Panasonic G9. And the adapters are all designed to work with Nikon or Canon full frame lenses. 85mm lenses are used for each test as the shallow depth of field makes it easy to spot focus issues. Each camera is also tested with a native lens for a benchmark comparison.

The Canon lenses on the Sony body all perform rather well, with the best performance coming from the Sigma 85mm f/1.4 lens used in combination with the Sigma MC-11. Chris says it feels almost like using a native lens. The worst performance came from the Nikon 85mm f/1.4 lens used with the Commlite ENF-E1. But as he says, Canon adapters have been out for a while now and have had a lot more time to tweak and develop, whereas Nikon adapters are still very much in their infancy. It doesn’t look completely useless, though.

Only one Micro Four Thirds adapter features in this comparison. But it comes with a  big benefit. The Metabones Speedbooster offers the field of view of a full frame lens resized to fit a micro four thirds sensor. This scaling down of the lens’s image projection circle basically intensifies the brightness, so wide open at f/1.4 it’s brighter than a native Micro Four Thirds lens at f/1.4.

That brightness increase equates to about 1 1/3rd stops. So, if you put something like a Canon 70-200mm f/2.8 lens on there, while the field of view and depth of field should match Canon, it’ll be like shooting an f/1.8 lens as far as the exposure goes allowing for faster shutter speeds and lower ISO. But, Chris didn’t feel that the performance with adapted Canon lenses was up to par on Micro Four Thirds bodies, so he didn’t do the outdoor tests they did with the Sony adapters.

It’s an interesting look at the current state of lens adapters. In short, though, if you’re thinking about moving from Canon to Sony and have a lot of Sigma glass, get the MC-11 and don’t worry about it. If you’re a Nikon shooter looking to move to Sony or a Canon shooter considering Micro Four Thirds, you may want to wait if fast autofocus is high on your list of priorities.

Despite the lower performance, as a Nikon shooter, it’s nice to see somebody seems to have finally made a decent Nikon F to Sony E-Mount adapter. It’s just made my decision to add an A7III to my existing Nikon kit (no, I won’t be selling up and switching) a little easier.