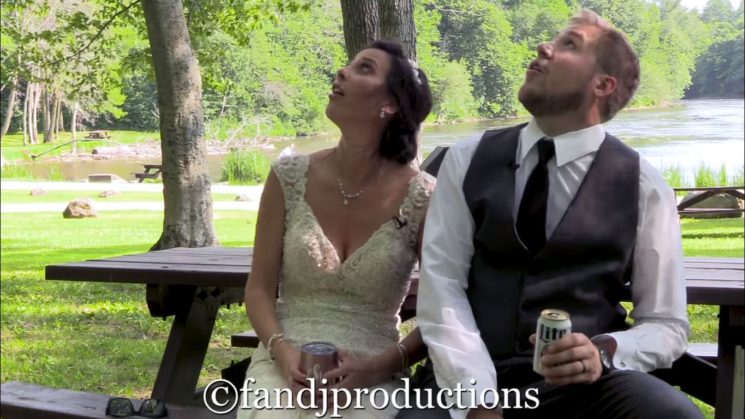 The wedding day should be a day to remember, and photos and videos of the event are there to preserve the happy memories. However, some memories aren’t full of love and joy, such as the moment when this couple nearly escaped being hit by a huge tree branch. Luckily, no one got hurt, and Freddy Hernandez of F&J Productions found some humor in the situations. He managed to shoot the dangerous moment, and he even included it in the wedding video.

The video starts with the shots of the couple hugging, getting married, releasing doves and just being in love. While they were giving an interview to the videographer, they heard a loud cracking sound, looked up, and barely managed to escape being hit by the huge branch. I think they were really lucky to react fast enough because they might have gotten seriously injured.

Freddy writes in the description that “this couple’s love will forever be stronger than that tree.” Still, I can’t help but notice that the groom didn’t grab his bride by the hand and pulled her away from the danger. He ran on his own and left her behind, but luckily, she was unhurt as well. I hope he’ll protect her more throughout tough and dangerous situations that will come in life. And as for this one, at least they’re left with a pretty unusual wedding day memory that was even captured on camera.

[Newly-wed’s near death experience via FStoppers]

Track photographer barely escapes with his life on the drag strip

While trying to get “the money shot,” photographer barely escapes a crashing car

« Honest advice to all starting wedding photographers
The Godox AD400Pro is official, here’s what you need to know »