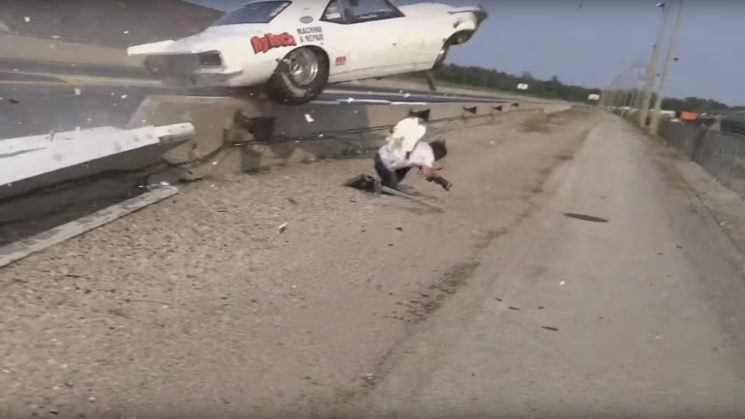 Automotive photographer can be very dangerous stuff, especially when it comes to racing. Over the years, some very close calls have been caught on camera, but few are as close as this. When Canadian drag racer Shawn Mcfalls had a 4 link bar break at the start of a race at the Grand Bend Motorplex in Ontario earlier this year, he was quickly sent off course.

This sent him and his Camaro right into the guardrail, then flying above it, straight over the head of an unnamed trackside photographer. Fortunately, the photographer had lightning reactions and was able to get out of the way. This could’ve ended up far worse.

Hopefully this photographer isn’t pushing his luck and has switched over to remote cameras with radio triggers for future races.

It’s only a short video, but, oh boy.

It’s a difficult and dangerous position for most of us to imagine ourselves in. I’m not sure I’d have been able to react so quickly. I think I’ll stick to portraits and animals.

What’s the scariest surprise situation you’ve found yourself in as a photographer? Did everybody make it away unscathed? Tell us your stories in the comments.

While trying to get “the money shot,” photographer barely escapes a crashing car