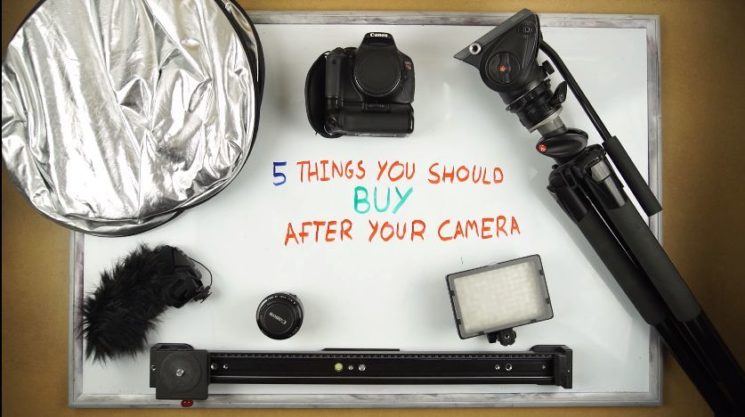 The first piece of gear you need for capturing photos and videos is the camera. So, you’ve bought it and used it, but there are some items you should also invest in right after your camera. The guys from The Film Look suggest five things you should buy right after your camera. They focus on the filmmaking stuff, but most of these can also be applied to those who want to upgrade their photo gear, too.

Most 50mm lenses will allow you to stop down to f/1.8 or lower, and thus achieve a shallower depth of field and work in low light conditions. However, if you shoot videos, try not to shoot everything at f/1.8. This will make it difficult to keep the moving subjects in focus. Instead, shoot around f/4, to keep the subject in focus and the background blurry.

A decent tripod costs money, but you can start with the basics and upgrade it later. Get a sturdy pair of tripod legs that’s going to last you a long time. As time goes by, you can buy new heads, and if you’re shooting videos, you can also eventually get a slider as well.

This one doesn’t apply to photographers. But if you’re shooting video, you also need to think of the sound. Your camera’s built-in mic won’t do the job, so consider buying an external microphone. You can add it directly to your camera, but it’s even better if you get it off camera and put it as close as possible to your subject.

Reflectors can make a big difference to your photos and videos, and they’re definitely something you should invest in. 5-in-1 reflectors are versatile and useful in many situations, and you can get them at various prices, depending on the size and the brand.

When you enter the photography/filmmaking world, you can always use the daylight for shooting. However, it won’t always be enough or give you the results you want. So, you will eventually want to add some lights to your arsenal.

The cheap work lights are one of the solutions, but the guys suggest you avoid them because the light quality is poor and they don’t look professional enough for the video. Instead, you can get light bulb holders like this and add light bulbs. There are also LED lights, or cheap studio lights like these.

I don’t shoot video, so I don’t own any audio gear. But, it’s interesting that the remaining items are exactly what I bought right after my camera. I was buying them as I felt the need for the upgrade, only they came in a different order: a tripod, an external flash, and a 50mm lens. The reflectors came last (although I’d used a DIY version before buying the 5-in-1 reflector). What were the first items you bought right after your camera?

[What to Buy after your Camera | The Film Look]

Do you really need a new camera? Ask yourself these questions before you buy it

Sunday Poll: If The Photo-Fairy Gave You $1500 What Camera Gear Would You Buy?