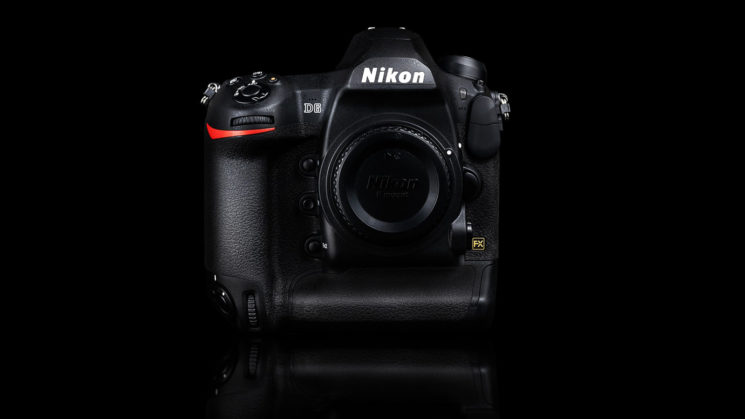 Since the announcement of the new Nikon D6, it’s been a long wait till the camera was available in the market. Here in Singapore, we finally received the first batch of Nikon D6. I was very fortunate to be invited by Nikon Singapore to have a hands-on experience with the new camera.

Like the predecessor D5, the D6 is nothing short of the ruggedness of what a professional needs. There are no doubts that the D6 will continue the legacy to produce high-quality images under any challenging situation. 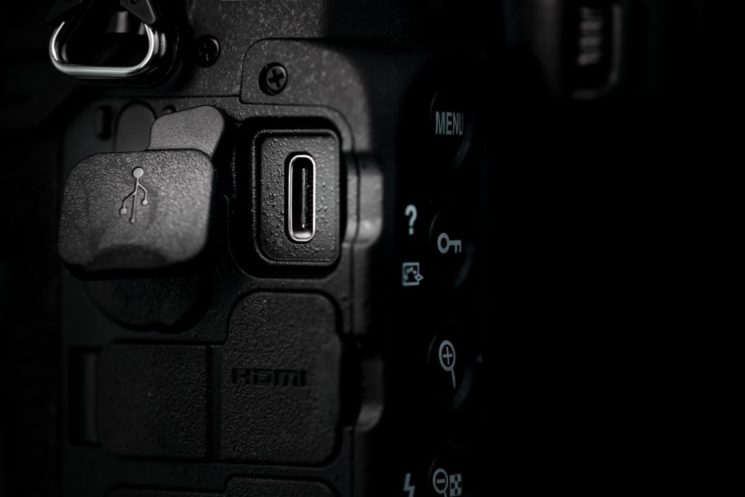 Wired ethernet connection is an important tool for professional photographers working under a tight timeline who need to upload images fast and reliable. Although the new D6 is using the same 1000 Base-T standard as D5, it has 15% improvement in speed.

Another good news was the D6 has upgraded its micro B USB to USB C port now. With a faster USB C (SuperSpeed USB 3.1 Gen), you could expect a faster transfer speed via USB. If you are using Camera Control Pro 2.0 software shooting with live view mode and transfer images at the same time to your computer, you will experience faster transfer speed. 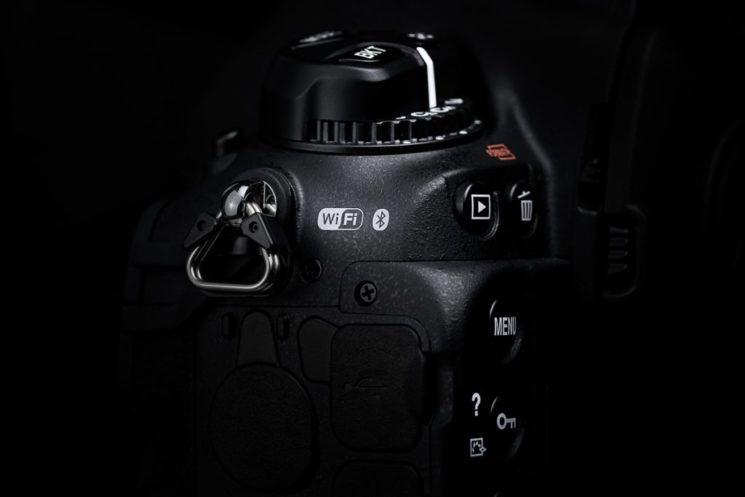 Previously on the D5, in order to use the WiFi function, you will need a wireless transmitter like WT-6 to work. That will be an extra cost if you need the wireless function.

With the new built-in WiFi now, transfer images wirelessly have never been easier than this. For close-range transfer, the built-in WiFi performs flawlessly and the speed was almost on-par with D5 transfer on ethernet connection. For further distance transfer, the WT-6 will still be recommended as it can go up to 200m distance.

The D6 now also integrates Bluetooth features like the D780 and the new Z series camera. The Bluetooth will be able to connect to your smart devices like iPhone, Android device, tablets, etc to download images and control your camera remotely with the SnapBridge app. 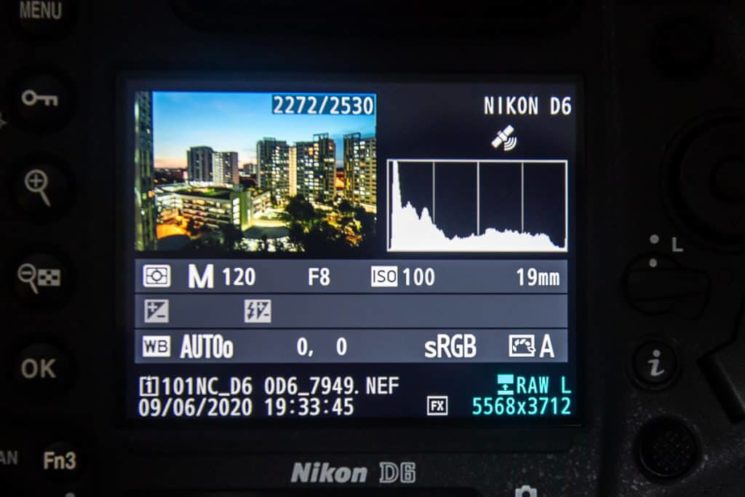 Just like the wireless data transmission, previously in the D5, it required an external GPS module to do geotagging. Now in D6, a GPS module is also integrated into the system that allows you to geotag images on the go.

I was really amazed by its GPS performance, it locked on to my geographical location even when the camera was just placed alongside my window. If you own a Garmin watch or even a smartphone with GPS, you will know that it’s not easy for smart devices to detect GPS location when you are partial indoor.

On top of that, I also checked the accuracy of the location. When I accessed through Adobe Lightroom map function, the geotagging location was pretty accurate. The overall performance from the GPS was just unbeatable.

Another great advantage of GPS was for the photo agency where they have multiple photographers deployed at an outdoor venue. Their backend photo editor will be able to pick up key images fast by filtering them by geographical location instead to go through all the mixed images sort by time or filename. 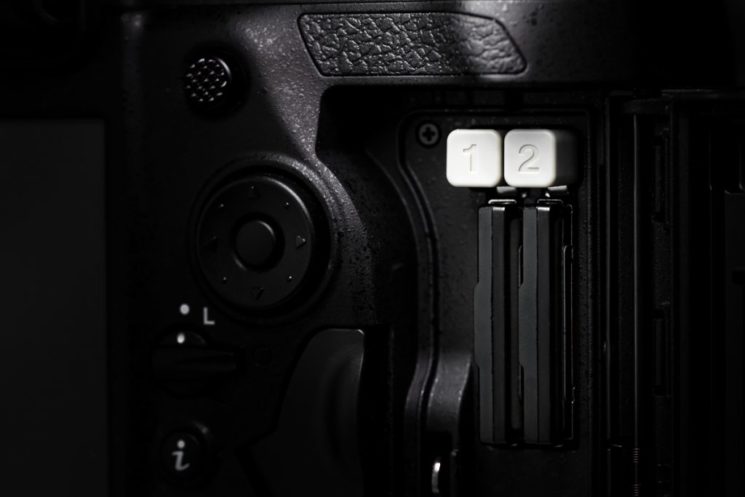 Having 2 card slot isn’t something new to the market. What’s new was the enhancement that Nikon made to it. The D6 has added a new mode of [JPEG Slot 1 – JPEG Slot 2], what it does is that slot 1 will record the image quality set via QUAL button and slot 2 will record [JPEG Basic] either medium or small file size. This is very beneficial for photo agency where they mostly shoot jpeg images and need to push out their images fast to their photo editor. Photographers now will be able to send out the medium or small jpeg out first from Slot 2 for publication, if they need higher quality image they still have the high-resolution image in Slot 1.

The timelapse feature might not be a new feature for Nikon camera but definitely new for their flagship series. For those who only do timelapse occasionally, this feature is extremely useful and time-saving. The in-camera time-lapse feature is able to set the shooting duration and automatically calculate the video output duration for you. On top of that, you don’t have to deal with a large amount of raw/jpeg images and stack them up manually into a video. 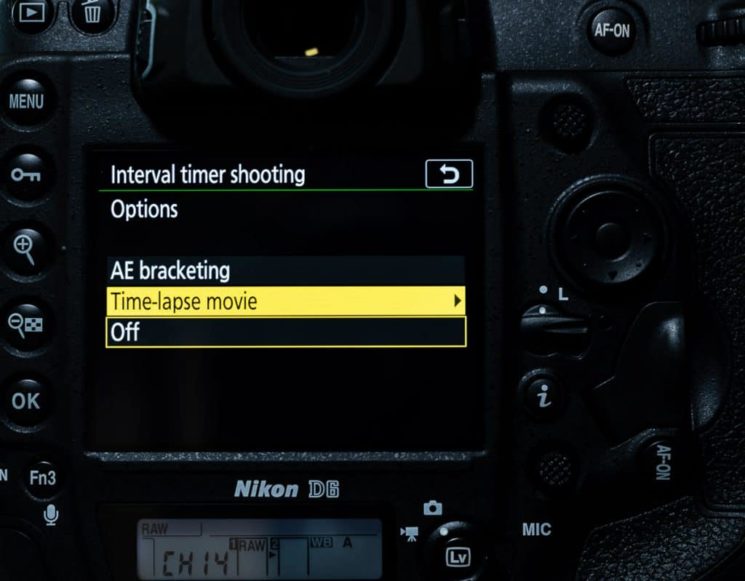 AE bracketing also seems to be a new feature which I have not seen before. In AE bracketing mode, the camera creates exposure brackets of each shot captured. 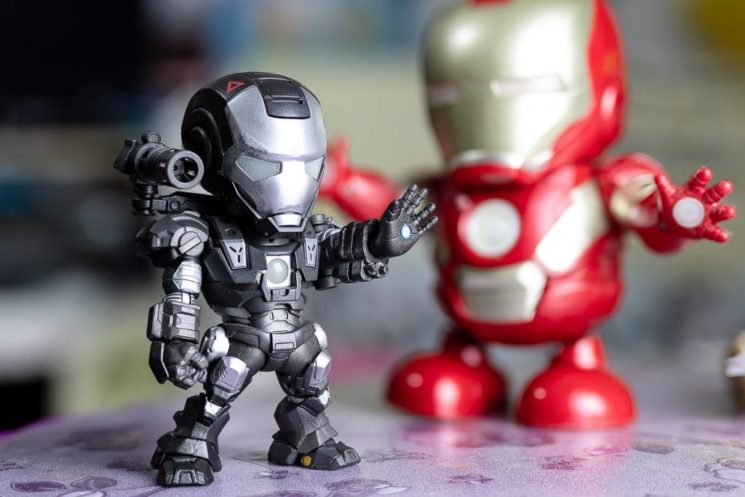 Focus shift shooting feature was introduced since D850 and finally added to D6 now. There is no doubt that D6 is a speed demon in shooting fast action but the D6 now can also shoot product flawlessly too. I showed examples of how focus stacking can level up your game in product photography.

As you can see from the example, if I want a shallow depth of field on the background with my ironman in full focus, I won’t be able to do it on a single shot at F1.8. If I shoot with a small aperture like F22 just to get the ironman in focus fully, I’ll lose my depth of field(Bokeh).

Focus shift shooting automatically adjust the focal distance from front to the back while retaining the depth of field. All the shots will then need to be stacked manually in photoshop to get the final result. 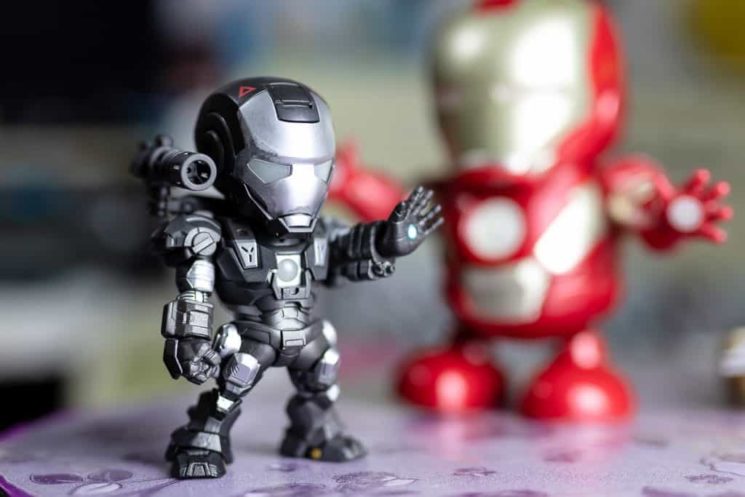 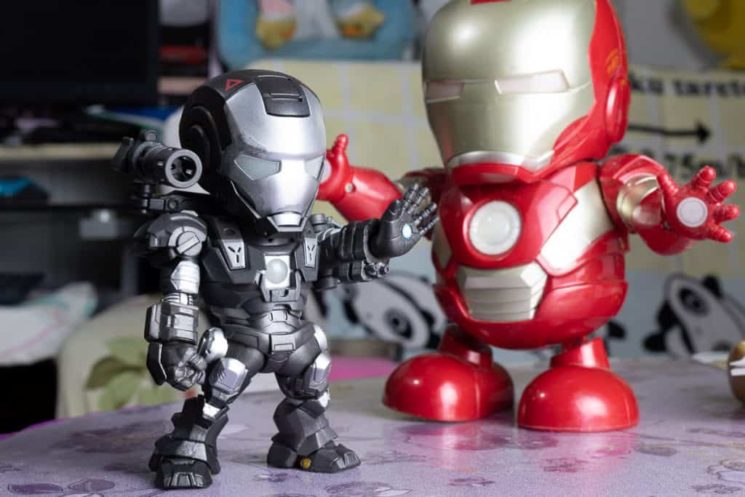 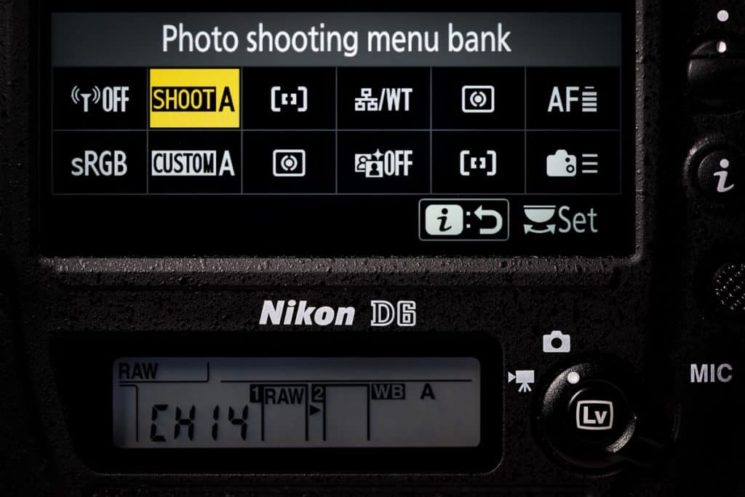 Following the trend of the mirrorless Z series, the ‘i’ button now is able to set 12 shortcuts for advanced customized settings. Some of the useful settings which I set were Wi-Fi connection, autofocus mode, AF-area mode, focus tracking with lock-on, etc. It helps to make quick access to all those settings without toggling deep into the menu.

This is an interesting feature added in D6 which I love in the enhanced workflow. In Sport event, fast upload of images to the media is critical. With this flick operation feature, it cut down the process for rating images/protect/send to the computer where it usually takes 2-4clicks to do it to just one simple flick motion.

Since the D5, the camera is already equipped with touch screen feature but it could only be used during image playback mode which I rarely use it. The new D6 now is able to use the touch screen function in the menu which is extremely useful when you need to key in alphabet letters in folder naming/copyrights/IPTC functions. 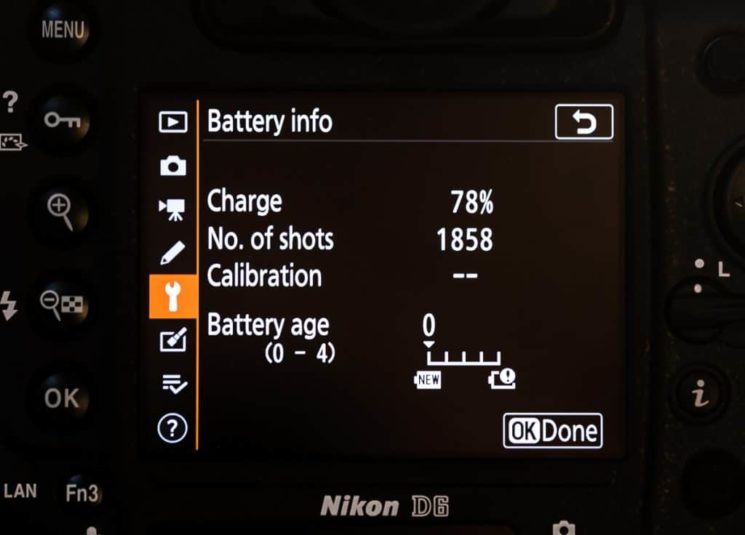 The D6 used the same EN-EL 6 battery as the predecessor D5 with the same battery capacity of 2500mah. What’s interesting was they managed to fine-tune the D6 into more energy efficiency even with all the new built-in WiFi and GPS module that could be battery draining.

This was an example of one of the shoots I did with the GPS module on, I clocked 1858 with 78% battery life left. On the advertised figure from Nikon website, the battery is able to shoot 8670shots in CH mode. This is double the lifespan of what the D5 can clock on a single battery.

The battery efficiency really impressed me. No brand in the market has been able to clock that many shots per battery capacity like Nikon D6. In the past, my D5 would easily clock 3000 over shots per battery in one day and that’s more than enough for me to end my day with. With the energy efficiency improvement now, even if you forgot to charge your battery the night before I reckon the battery could still last you for another day shoot. 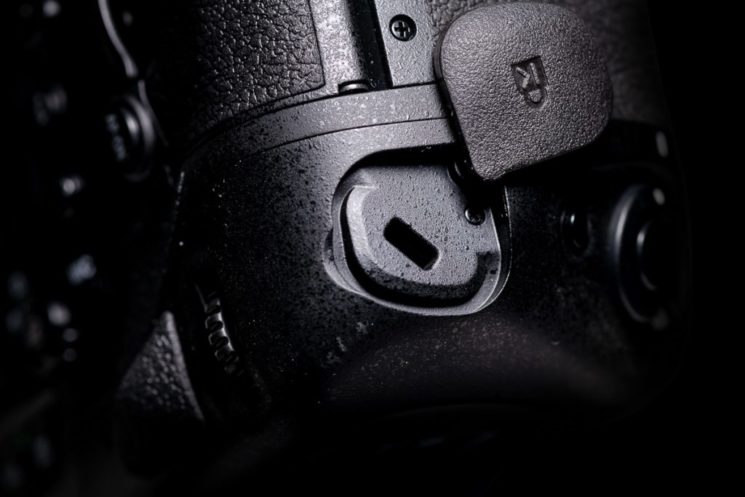 This is one beneficial feature for photo agencies where their photographers often need to set up camera on remote shooting situation or any photographer who needs to set up camera remotely. Cameras are often left unsecured and prone to theft if not careful. Now the D6 provides a sense of security with the Kensington anti-theft lock slot for you to secure the camera in remote areas.

Another advantage was that, during a major sporting event where many photographers with the same remote setup might accidentally mistake another photographer’s setup. With the lock in place, they can ensure that they are unlocking the right setup before dismount, to prevent taking the wrong gear.

Editor’s note: You can read the rest of this review on Andy’s website where he covers autofocus, high ISO performance and shares his overall thoughts.

Andy is a professional photographer based in Singapore. His portfolio is 70% sports, and he has covered both local and overseas international meets. In addition to sports, he also shoots underwater photography, automotive, products, and interiors. You can find out more about Andy on his website and follow his work on Instagram. This article was also published here and shared with permission.

FAA missed congressional deadline to create drone regulations; expects 1 million drones to be sold this Christmas
« Don’t worry about blown out highlights: Sometimes it’s the right thing to do
Here are four ways to find perfect location for your next shoot »