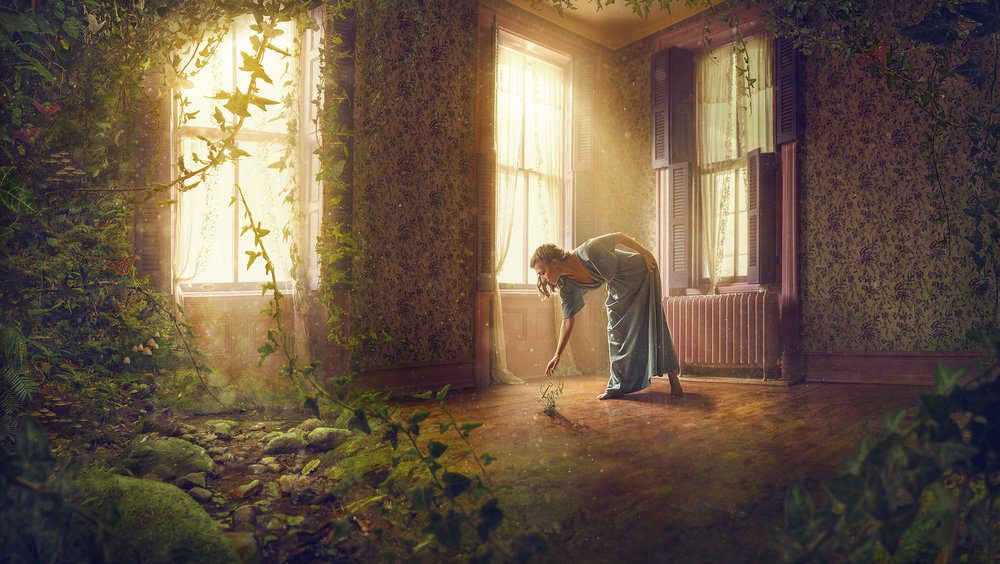 Last year my friend Marsha invited me to this crazy Victorian mansion along with a small handful of awesome photographers and models to hang out and make some art … Obviously I said, “heck yesss.” The house was a gold mine of strange colorful rooms full of interesting wall paper, decorative trimmings, and some gorgeous natural light. 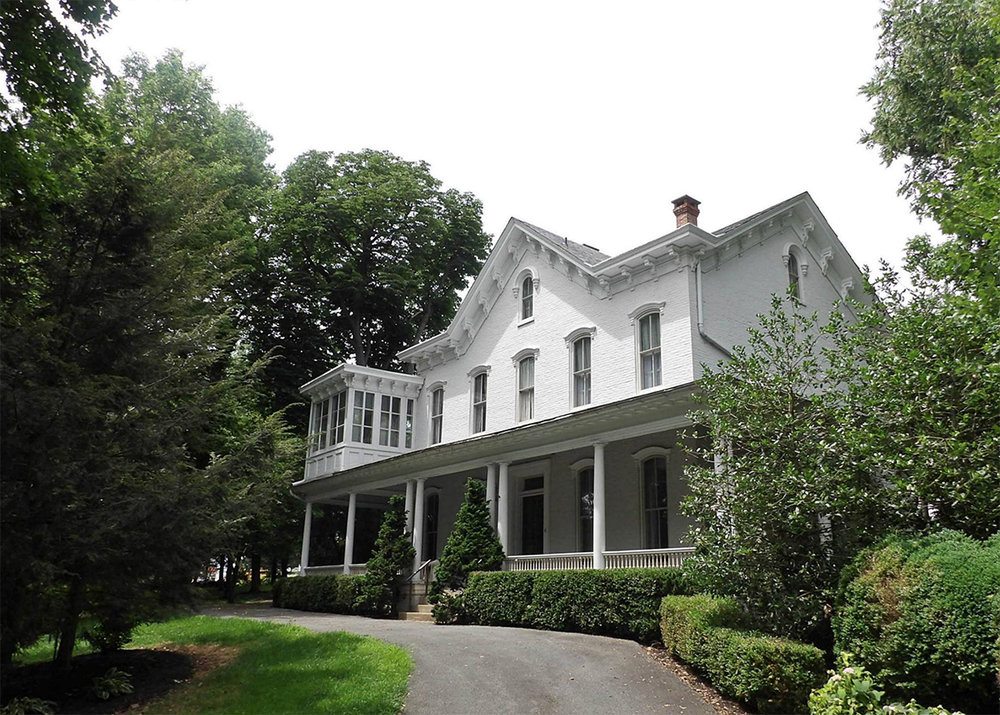 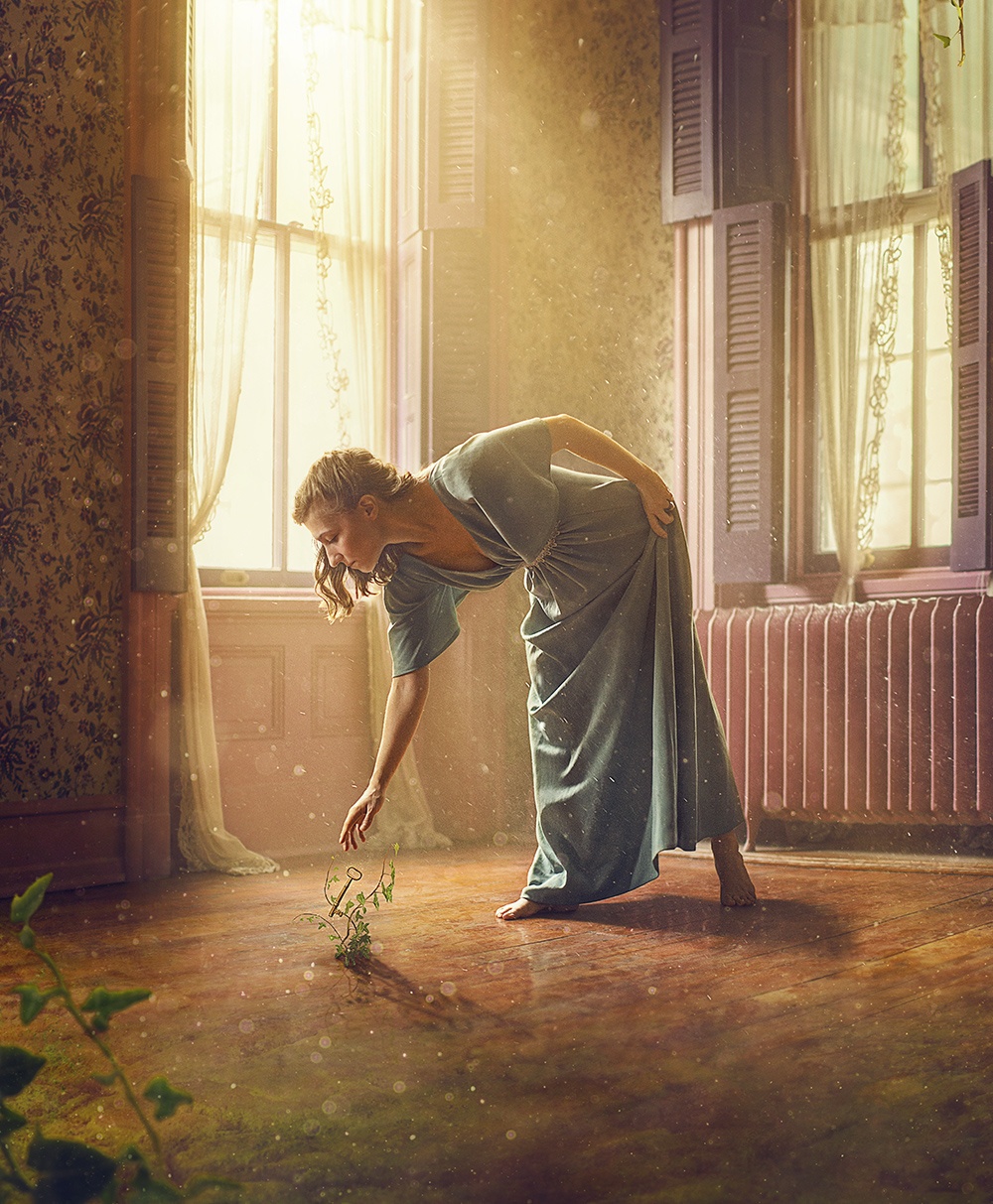 You may have recognized the lovely lady in “Key To the Unseen Kingdom,”  because it is most definitely none other than the Brooke Shaden! We had been friends for some time at this point, but just hadn’t been able to find the right opportunity where our schedules lined up so we could actually shoot together. So, I knew I wasn’t leaving that mansion without capturing something magical with her.

I was thinking about how Brooke’s brain is constantly unlocking these magical fantasy realms she dreams up in her whimsical images, so I decided it would be cool to try to depict that idea. What if she was reaching for an actual key that would unlock an actual magical world that was all around her that she just couldn’t see yet. Aka wouldn’t it be fun to edit a bunch of “nature” into a room!? Yes, yes it would be …. um well I mean, was … Before we dive any further into this post I’d just like to take a second to send out a huge thank you to Brooke for being such an incredibly giving and warm person to everyone she encounters. She has and continues to inspire SO many people and is just a really special human.

Anyway, being the self-appointed-official-fancy-pants-Photoshop-wizard that I am means one of my favorite pastimes is to take a mostly simple image and add a bunch of elements to make it SPECTACULAR. (Well, hopefully spectacular anyway.) Here, my friends, is basically how that all went down in ten steps …

STEP ONE – Expanding the image 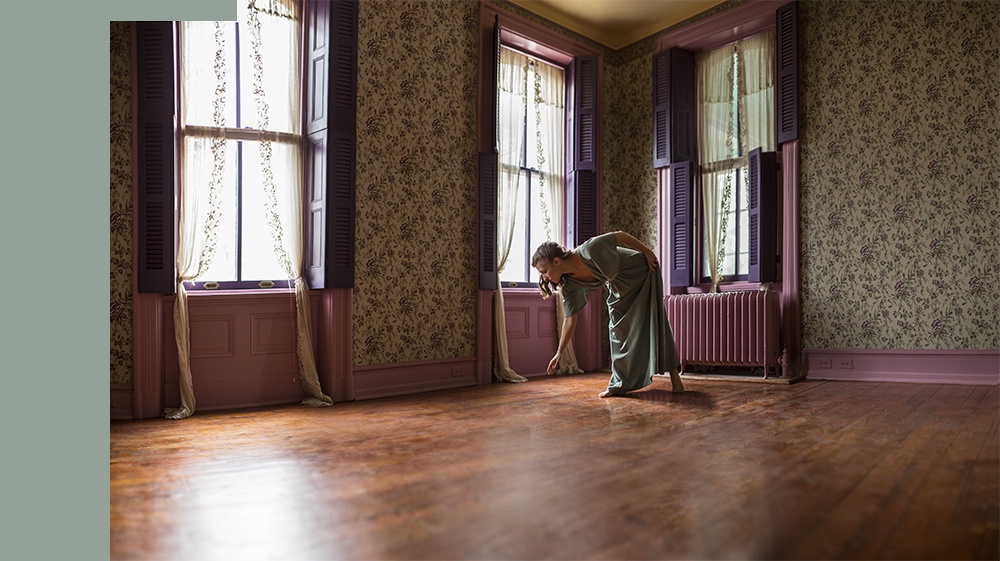 This first step is fairly self explanatory as long as you have any idea what “expanding the frame” means. Basically I took the picture of Brooke closer up (aka larger in my frame), then shot several images of the room around her. Using Photoshop I then stitched the images together to get a much larger picture with even more pixels and information. I also added a bit of space to the left side of the frame knowing that I’d be adding some extra greenery over there. You can see the expansion in a crazy fast sort of way at the start of the gif below. 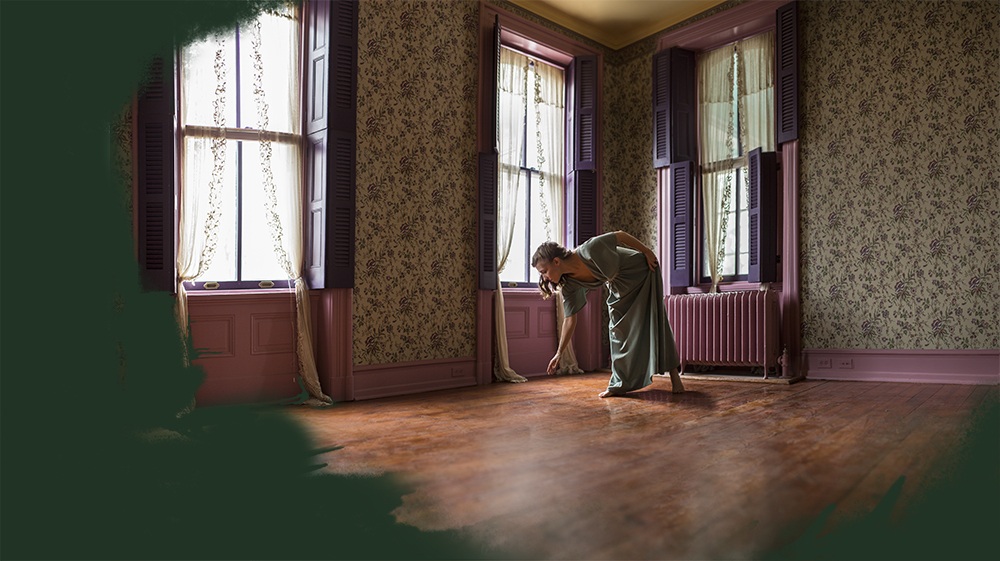 Next, just using some green paint, I roughly scribbled in where I wanted to have the main chunks of “nature” added to the image. That’s it … that’s all this step is, really exciting step you guys. Calm down, it’s only getting more exciting form here on out! 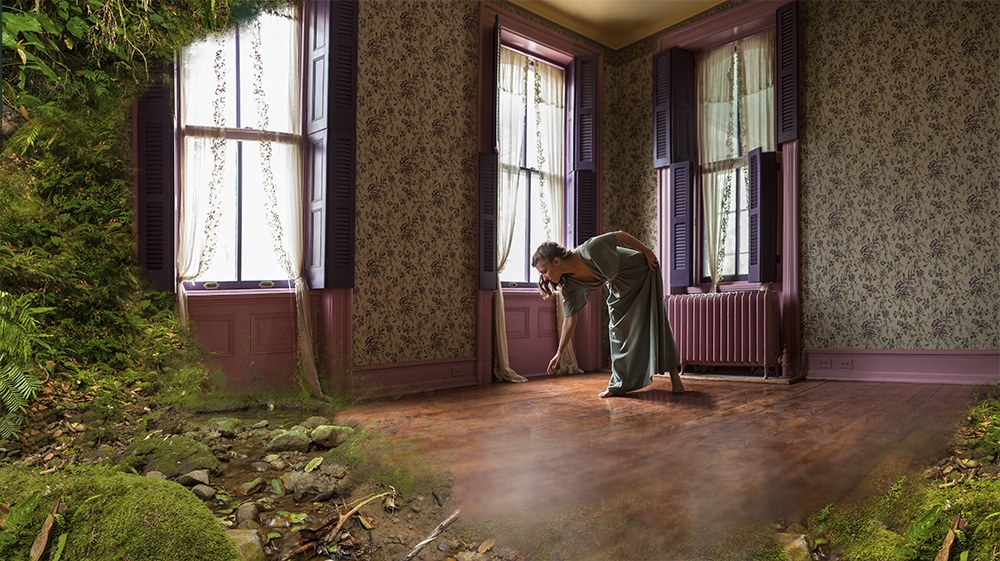 BOOM, nature! I know, right? Already looking pretty cool and I’d hardly done anything yet. Here, all I did was take a couple of pictures of the aforementioned “nature,” placed them over top of my green paint layer from the last step, and used a clipping mask to apply the images to that green layer. You can do this by either right clicking on a layer and selecting “Create Clipping Mask,” or by holding down the ALT key and hovering between the layer you want to clip and the layer below it that you want to clip it to. (You’ll see a little box with an arrow pointing down next to it appear when you hover in the right place.) This makes it so the nature images will only show up on the layer below it (the green one). This techniques is kinda like a reverse layer mask sort of thing? You can paint and erase the green layer at any point and more or less nature will show up. 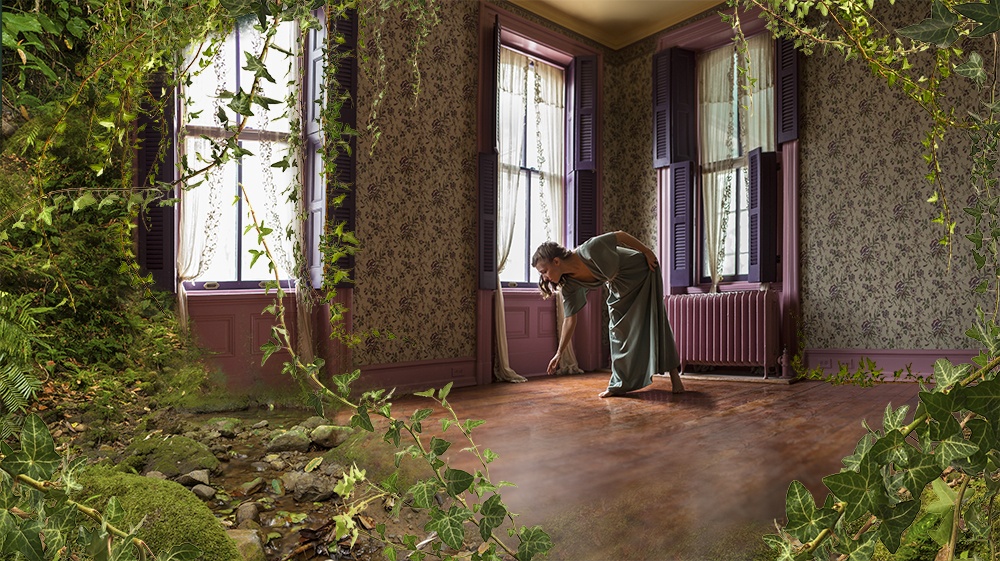 I used this handy set of vine images from the RAW Exchange store to add in vines. This step came in really handy for hiding/obscuring the edges of the “nature” where it faded into the rest of the image. 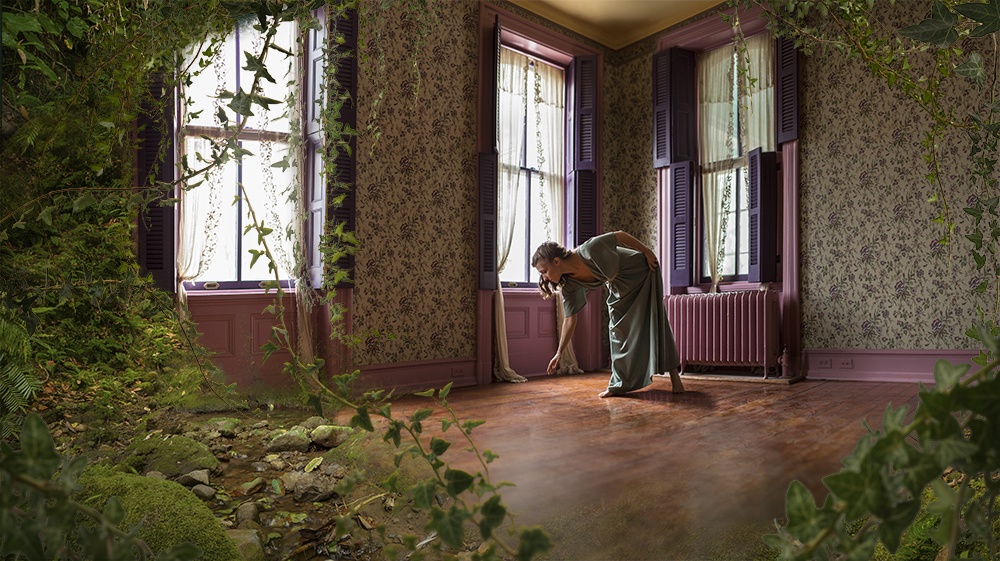 Next, to make the vines blend in a bit more I darkened them by painting with black on a new clipping mask layer. I also applied some layer styles to several of the vines to alter their lighting so they’d fit the scene better. I used “Satin” to darken them slightly, and also an “inner shadow” using white, set to overlay, to emulate the light coming from the windows. Then using a “Lens Blur” filter I blurred a couple of the vines that were supposed to be closer to the camera in order to fake some depth of field. 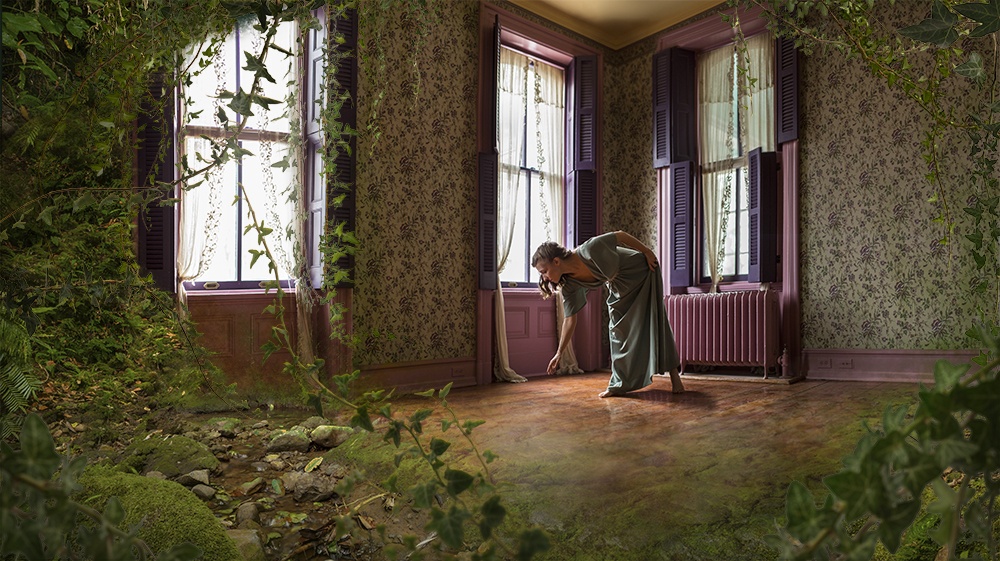 Using an image of a textured moss covered ground, I blended the floor into the “nature” a bit. I placed the moss layer on top of the wood floor, added a layer mask, and then inverted the mask so it completely disappeared. Then I painted on the mask with a large soft brush at a low opacity to slowly fade it back in as needed. This gave a more gradual transition from the hard wood floor to the greenery around the edges. 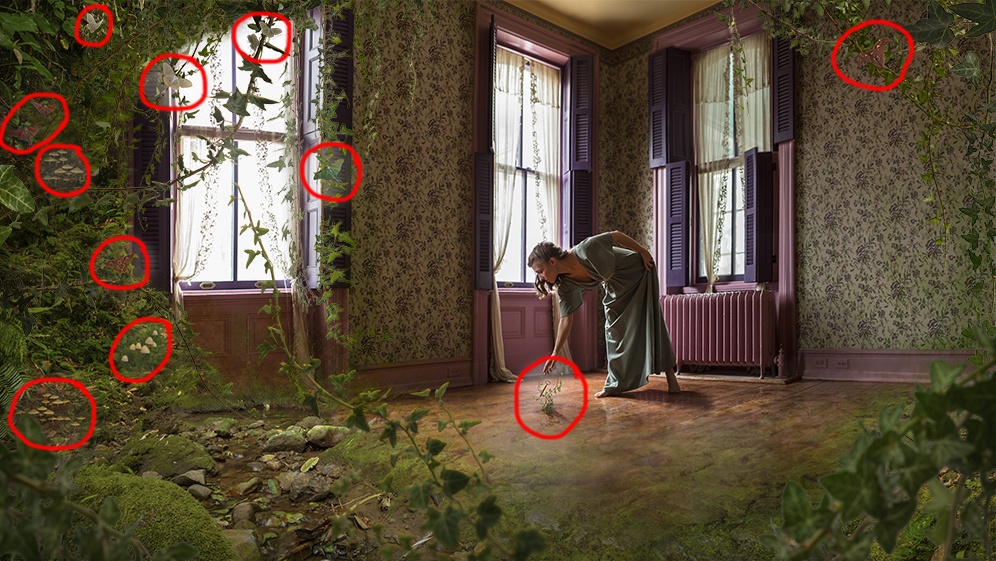 For the next step I edited in some extra little details like the key, clusters of mushrooms, and some moths. (You’ll notice I’ve cleverly circled them for your viewing ease … You’re welcome.) The moths were actually the same ones from this image I made previously called “The Secret Doorway.” I was thinking how the color palette and overall feeling I was envisioning for “Key To The Unseen Kingdom” was similar to that of “The Secret Doorway.” Since they already sort of went with each other I wanted to add some details to subtly tie the two pieces together. 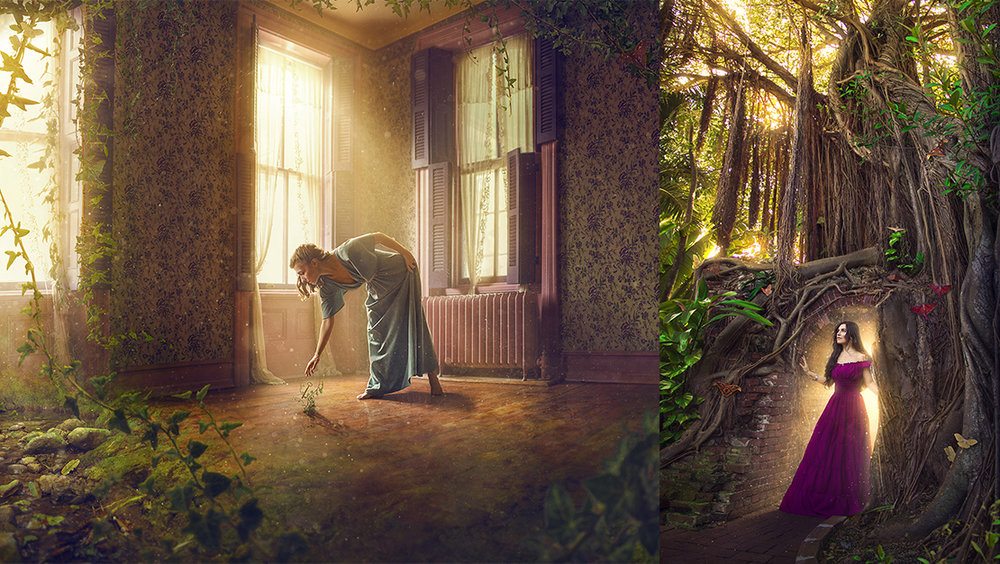 I figured adding the same moths would be a nice nod to the other image. Essentially, what I’m getting at is that Kara (seen above on the right) was in this room before she found the key (which led her through that secret doorway), and Brooke is the next curious adventurer who has stumbled upon the magic key. 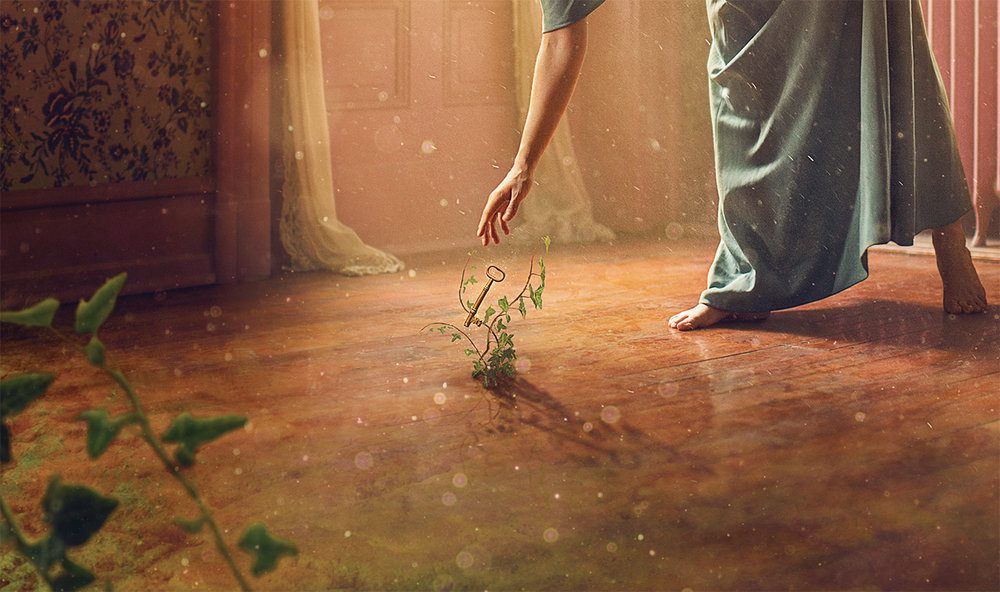 For the key I used a couple of the very ends of the vines to create a little tendril-y plant of sorts with the key floating in the middle of it. Then I duplicated and merged the group, filled it with black, flipped it vertically, stretched it, blurred it, set it to Overlay, turned the opacity down, and masked part of it away to create a shadow. I also used the “Outer Glow” layer style on the key to make it stand out a little more, plus who wants a non-glowing key. Come on.

STEP EIGHT – Let there be light 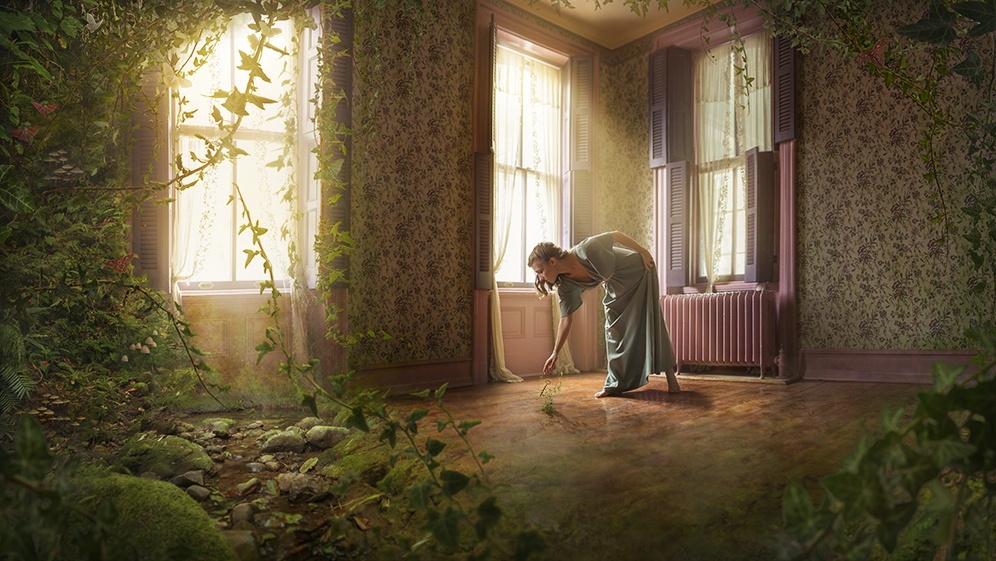 I wanted to enhance the light pouring in through the windows with more of a glowing warm quality … so I did. I used some of these light rays on layers set to “screen.” Then I painted with a large soft brush on an “overlay” layer using a light orangey-yellow-ish color to slightly brighten and warm the light coming in the windows, and also painted with black to darken much of the rest of the image. It’s hard to tell from this small image, but I also did a lot of shading and highlighting of details on a number of various Overlay and Soft Light layers; basically dodge-and-burning all the details.

STEP NINE – Particles … because I can’t not 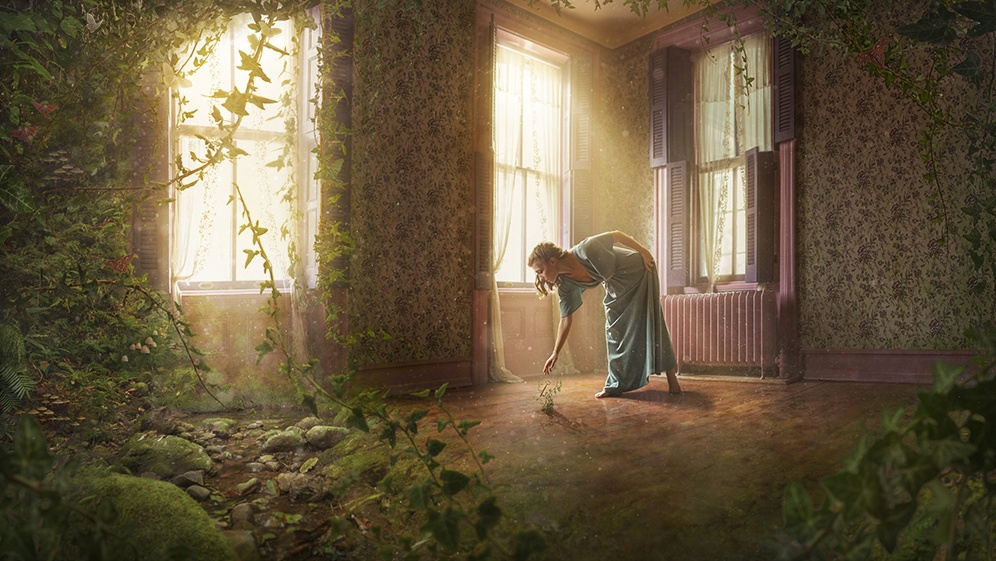 Anyone who has looked at my portfolio for half a second has probably gathered the fact that I’m a huge floaty particles and atmospheric detail addict. So duh, of course I added some glowy little particles to this image as well. No picture is safe from particles when Robert Cornelius is editing. I used a particle texture layer (yet again from the RAW Exchange store) and set it to “screen,” just like with the light ray layers in the last step. I then duplicated that layer, set it to “Soft Light” and turned the opacity of both particle layers down until it looked like the right amount. 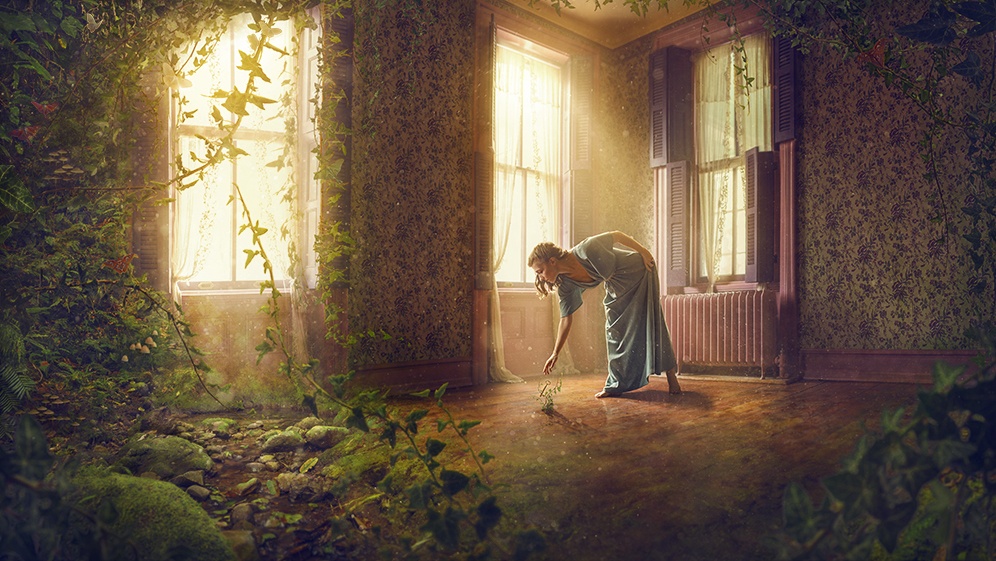 To finish things up I just tweaked the overall color a bit. I used a Hue/Saturation adjustment layer with the “colorize” box checked and selected a warm orange-ish color, then set that layer to the Soft Light blending mode and turned the opacity down to beef up the contrast and overall warmth of the image slightly. I also used a Color Balance adjustment layer to push a bit more yellow into the highlights and a tiny bit of blue into the shadows. 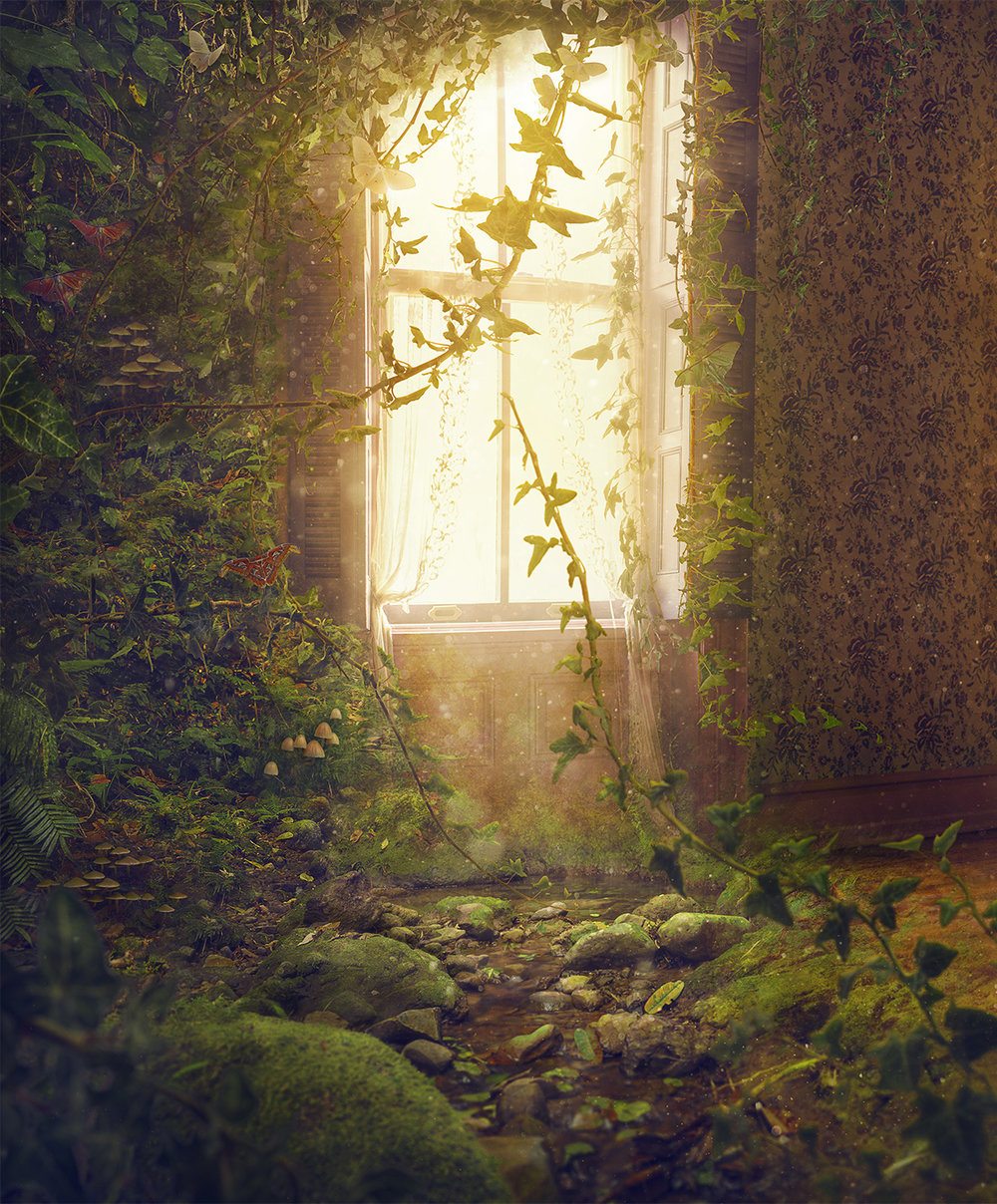 Obviously the entire edit was way more than “10 steps,” more like 18 million tiny steps, but this was a general overview of what went into creating this work of art. Also, not everything went exactly in this order, I’m kinda all over the place when I edit and do a bit of one thing then come back to it numerous times. I just consolidated what happened into easier to follow steps that I hope you found enlightening. Please feel free to enjoy the speed edit video below. (You’ll notice I didn’t include the beginning frame-expanding-portion of the edit because the video was already so long, and once you’ve seen me expand a frame once you’ve got the gist of it. Plus I kindly provided the layer-gif earlier in the post.)