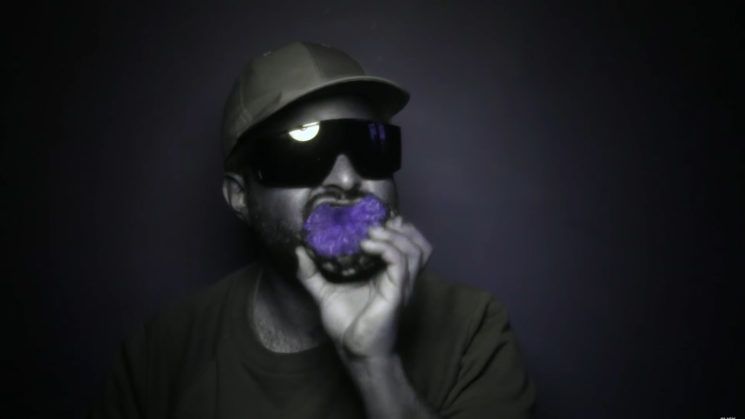 Going out of the visible light spectrum isn’t something most photographers think to try. But for a select few, seeing the invisible has become an integral part of their photography. Infrared conversions are common for DSLRs these days, and prices have come down greatly. What’s not seen so often, though, is UV photography.

Mathieu Stern delves into that realm a little with his latest video. Teaming up with fellow photographer Pierre-Louis Ferrer, Mathieu chops up some fruit under a UV blacklight. It’s an interesting look at how different surfaces react to different wavelengths of invisible light. The inside a pineapple, for example, become a rich purple flesh. The skins of tomatoes, however, turn jet black, reflecting nothing.

To shoot the video, Mathieu used a full spectrum converted Canon EOS 6D with 50mm f/1.8 lens and a Omnilux UV blacklight bulb. As the camera is full spectrum, a filter is also placed at the end of the lens to block everything in the visible light and infrared spectrums.

It’s a very surreal look at fruit, and it does very crazy things to human skin, too. I think the tomatoes surprised me the most, though, when I was watching it through for the first time.

I’ve been thinking about maybe converting over one of my old DSLRs to infrared for a while. It looks like I might have to take a good look into ultraviolet conversions, too.

Do you use a UV converted camera? Do you shoot UV with a filter? Have you been thinking about getting an old body converted? What about infrared? Which do you prefer? Let us know your thoughts, and show us some of your IR/UV shots in the comments.