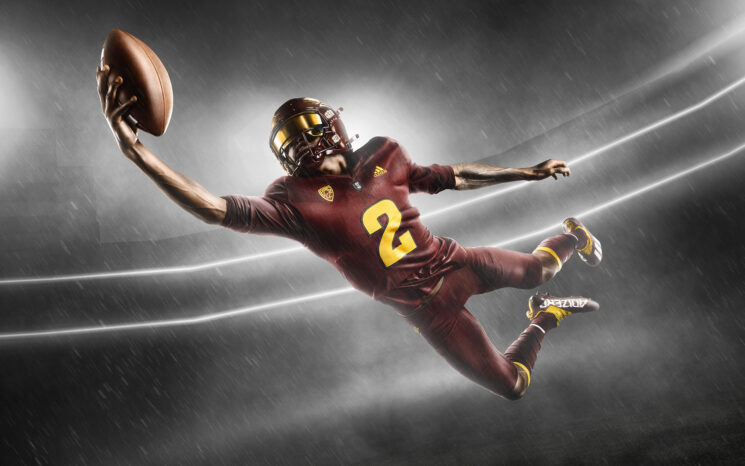 Photographing football campaigns in one of the most aggressive and intense types of commercial photography there is. While some photoshoots will have a sushi chef for craft services, football sets have doughnuts, caffeine and loud music. Football is unlike any other sport to capture, and I absolutely love it.

One of the more important, and less talked about, aspects of a commercial photoshoot for a football campaign is the type of energy that exists on set. It is not like you are on the sidelines of the filed at an actual game where there is so much testosterone flying around that it is contagious (even to those that just came for the beer and peanuts). A photoshoot doesn’t have the real threat of getting crushed by a 400 pound lineman from the opposing team, instead it is a safe environment (except to those that don’t like being photographed). It is on the photographer (or on large sets, the producers) to have the setting prepped in a way that is conducive to getting the athlete in the zone.

The first thing, and most important part of a setup for getting aggression out of a subject is to know what their personality is like. This kind of read has to be rather fast, for when you are photographing a number of players in a single day, trying to “get to know” each guy is not possible. One of the rules of thumbs I go off is where the player I am photographing sits when they come in the studio. Players in team sports vary greatly with their introvert/extrovert personalities, and knowing if they feed off their teammates off the field can be key to coaching them on set. If a player sits with the group and proceeds to joke around with the crew, it is in your best interest to leave the studio lights on, and let their peers encourage them (whether through pumping them up, or giving them hell on set). At the end of the day, while I have 10-15 years on the college guys, they have 150 pound on me, and there is no threat that I can pose that hits them harder than their friends telling them they need to do some arm curls.

If a player is more self-driven in their demeanor, the rules on set change. For football, I have found that receivers tend to be this way, with running backs and quarterbacks being split 50/50. With this type of player, you need to kill the studio lights completely, and let the only light they see be what the modeling lights show. Doing this immediately shuts them off to the outside world and sometimes it feels as though I am watching a player mentally walk onto the field. If there are other teammates on set cracking jokes, I have found that they either need to be silenced, or the music needs to be cranked up. With a self-driven player, you have a mega chance for great intense images, but you have to line up the shot list in an order that quickly gets them used to the flashes, and then immediately catapults them in to the complicate action. 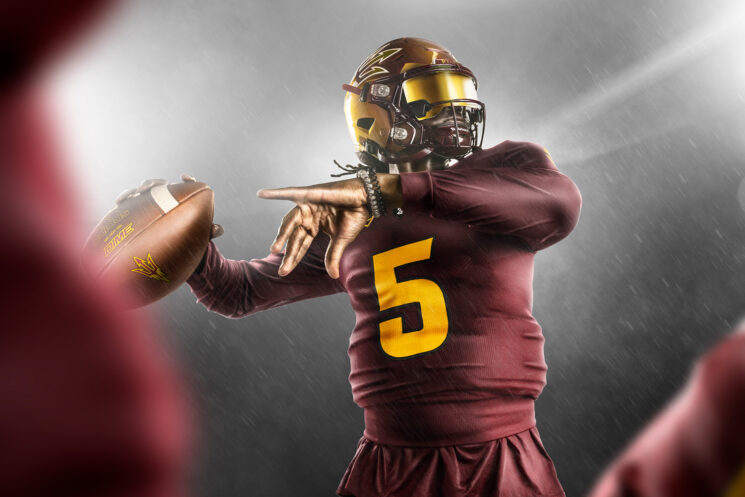 An example of this is this shot of a runningback I did for Arizona State’s most recent football campaign. The image is as much tension on the body and intensity that I could build into a shot, and it came on frame 8. From the gritting of his teeth, to loading all his weight to one ankle (which seems painful to me), the player was immediately in the frame of mind (no pun intended) within minutes. Had I taken time to build out lighting, or approached him differently, by the time things were dialed, his focus would have been performing for the camera, and while I appreciate the effort, it often leads to an image that feel inauthentic.

The next image that represents a bit of an easier to create shot is the image that I created of a receiver for this year’s campaign. The player was lead by the enthusiasm of others, and for his image, i let them get him into the zone. One of the best ways to do this is to show the back of the camera to the other players on set first. If you have a strong image, it is only going to further their reactions, and the photo of that subject is the result of snowballing excitement. If you are lucky enough to o play this right, you will have a player that doesn’t care about the amount of times they are diving for the shot, as they are empowered by the audience. For the specific shot, it helped me to perfect his form (specifically how his hand and feet trailed) so that I could get the shot of the athlete in a single frame. 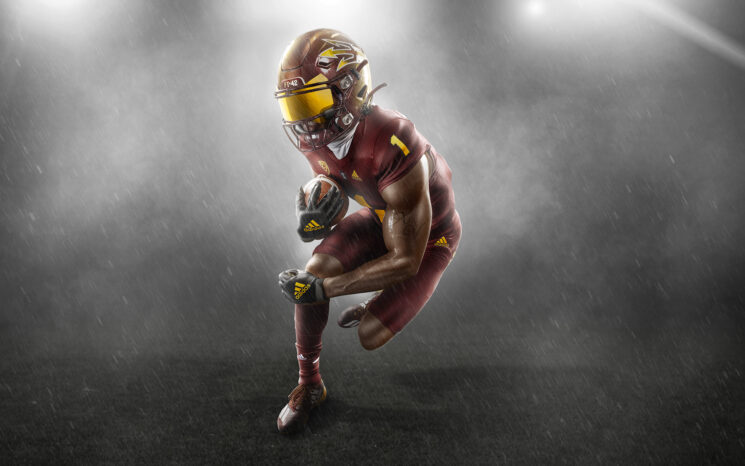 At the end of the day, my job at an advertising photographer is to create a shot that makes a emotion in the viewer quickly, but doesn’t lead to them asking further questions. The only to do this is to get the player to perform naturally, and not forced. However, the real skill on set comes to how we as photographers create “natural.”

Watch: Fan runs onto the football field, photographer tackles him down

The Last Of Us: A Video Game That Lets Players Become Photographers
« New to landscape photography? Think twice before buying that super wide angle lens
This is the worst digital camera in the world with a resolution of only 48 pixels and no lens »