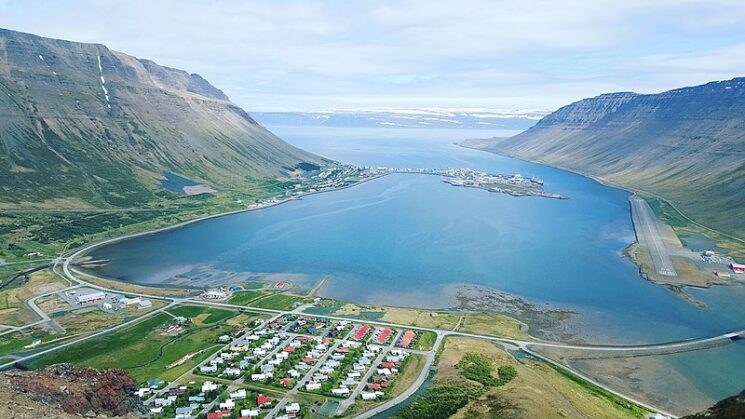 The older I get, the more I want to move from the city to a small, quiet village. From what I know, many people have the same dream. Well, photographer Isley Reust is living this dream. After living in the US and Germany, she moved to a small remote fjord town of Ìsafjörður in Iceland. For Bustle’s series Relocated, she talks about what it’s like living there as a solo-living photographer. It’s a very interesting video, and if you’re thinking of relocating to a quieter village or town, you definitely wanna watch it.

Ìsafjörður is a small town in the Westfjords peninsula. Still, it’s the largest town in the region with some 2,600 inhabitants. Isley says that you shouldn’t live there if you don’t like darkness in winter, 24 hours of daylight in summer, and extreme weather conditions. But she apparently does, and she enjoys living in this picturesque place.

Isley says that she always knew she was going to move to Iceland, ever since she was a kid. “Flying back and forth from Germany to the States, we’d fly over Iceland and Greenland,” she says. “And I just remember being so fascinated and intrigued with the landscape and how beautiful it was. I thought to myself, ‘One day I’m going to move here.’”

For a few years, Isley lived in LA and worked in the TV and film industry. She says that she reached the point when she was completely fulfilled with her work… And then came time for a change. Finally, the right time came to fulfill her childhood dream, and she chose Ìsafjörður to be her new home.

This town sits in a fjord that was cut out by a glacier, as Isley explains. That gives her a remarkable view of the mountains. It’s also a very isolated place. When there are big storms, roads can be closed for days and shipments can be late. This sounds pretty inconvenient, but isolation and solitude are actually what some folks look for. So, I guess it’s all a matter of perspective.

Another thing Ìsafjörður is specific for is that it’s very safe. Isley admits that she never locks her house or car doors. In addition, people are close and everyone’s always willing to help you. After all, it’s often how it is in smaller towns and communities.

When it comes to the daily routine, hers is never the same. To me personally, that sounds perfect. It all depends if she has photoshoots or tours to lead. Even though the town is small, there are plenty of places to see and things to do, especially if you enjoy beautiful sceneries and photograph them.

Isley also gives a short cost breakdown. Living in Ìsafjörður isn’t as expensive as living in Reykjavík. Also, she lives on the edge of the town so her rent isn’t as expensive as it would be if she was downtown. However, she needs to have supplies shipped and she can’t have everything she needs right away, and that can get a little expensive.

For Isley, the biggest downside of living here is that her family is in Germany and the US. For me personally, that would also be the biggest obstacle, so I can understand it. So, she probably won’t stay in Ìsafjörður forever. Still, after living in this charming town for some time, Isley says that she can’t see herself ever living in a big city again.

At the end of the video, Isley shares a piece of advice for all of you who’d like to live like this. Be passionate and excited about it, and be sure that you really want it. And then – take the steps to live your dream life.

Make sure to check Isley’s wonderful photos on her Instagram. And let me know – do you see yourself living in a place like this?

« It took six hours and 400,000 images to shoot this timelapse of massive solar activity
New tech is coming to help fight the spread of misinformation in photographs online »