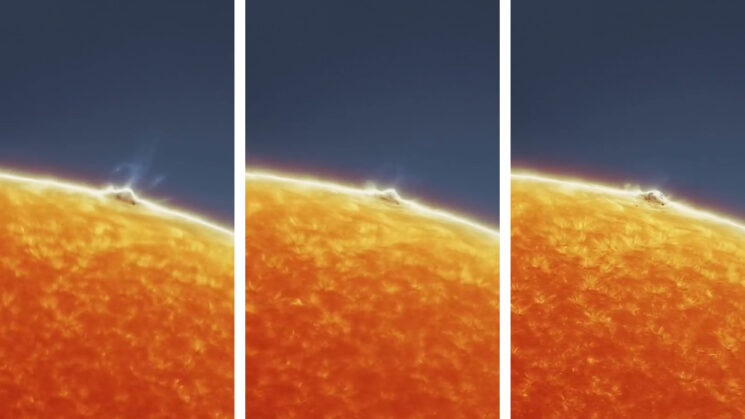 Whenever I see Andrew McCarthy’s name pop up on my Instagram feed, I know I’ll see and read something amazing. This time, this creative astrophotographer blew my mind with a timelapse of a massive active region of the Sun. It took Andrew solid six hours of observation and shooting this incredible sight, but judging from the end result, it was more than worth it.

Andrew published the video back in April. We got in touch since and he kindly shared some details of the timelapse with DIYP. “There is a volatile region on the sun that could produce a massive flare any minute,” he writes in the video description. As I mention, it took six hours of watching and shooting, ending up in more than 400,000 images. He used the best two hours of images, and turned them into a short, but impressive timelapse.

For observing and shooting the sun, you sure can’t watch through a regular telescope. Andrew tells DIYP that he used a specially modified one that allowed him to see the hydrogen-alpha emissions from the sun, which is the solar chromosphere.

To capture a single image of the sun, it takes Andrew thousands of 16-bit RAW images over the span of a minute or two. To do this, Andrew used a very high-framerate camera. “Those images are then scored and stacked by special software designed to help average out the effects of atmospheric turbulence,” he explains. So you can now imagine how many times he needed to repeat this to get the six hours’ worth of shots.

“What you’re seeing here is an ‘Active Region’ on the sun,” Andrew tells us further. “Sometimes they produce flares, but usually they produce prominences and filaments. You can see the prominences forming in the video- faint lines of plasma that arc around the active region.”

Andrew explains that these regions sometimes produce huge magnetic loops. “This one just burped out planet sized gobs of plasma” he adds, but it was still an impressive sight for him, and so it is for us who watch it in his timelapse.