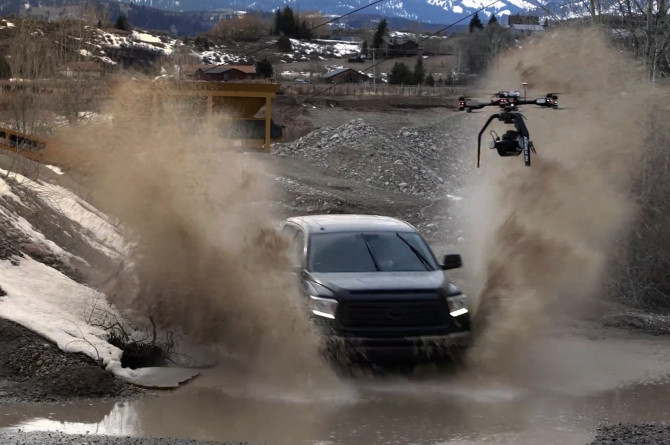 That being said, when it comes to tech specs and resolution the guys at Brain Farm just blew any drone footage you’ve ever seen so far out of the water it’s not even funny.

By pairing a Phantom Flex4K with a custom made Aerigon UAV, Brain Farm captured the world’s first Ultra High Definition, 4K aerial drone footage which has been described as a “cinematic game changer”.

“I feel like we’ve hit a ceiling in digital cinema”, says a voice in the video. “Early on at starting Brain Farm we had access to these propriety tools, and now everyone has them. Today really is the dawn of a new day”.

That’s a bold statement, and amazingly enough a true one as well.

Most photography drones use a GoPro or similarly sized camera, with a select few being able to carry a small DSLR. Weight has been a limiting factor which makes this achievement almost as impressive as the footage itself.

Thanks to a joint effort by Brain Farm and Intuitive Aerial, a Swedish drone manufacturer, they were able to create the first UAV capable of carrying the weight of the Phantom Flex4K.

The weight of the camera itself, without a lens or viewfinder, is 6.3 kg (14 lbs) and the estimated weight of the entire setup used was approximately 13.5 kg (30 lbs).

Compare that to the hugely popular DJI Phantom’s 1.2 kg weight with a maximum payload of around 200-300 grams, and you can easily see the difference.

“When we partnered with Intuitive Aerial to build this system our intention was to help creatives all around the world” said Brain Farm. “We might just stand a chance at breaking that ceiling”.

Well, they definitely broke the ceiling they mentioned earlier, but with a $250,000+ price tag not many creatives will get to use this system anytime soon and Brain Farm will keep its technological edge.

If you’ve ever wondered how some of the super-fast scenes are filmed using these 1000fps cameras, when not attached to a drone of course, have a look at the Mrmoco Bolt robot.

Watch An Antelope Knocking a Phantom Drone Out Of The Sky

« Magic Lantern Puts Linux On EOS Cameras. Could Be Developer’s (and filmmakers) Heaven
FAQ: So Your Company Has Been Found Using Alex’s Photographs Without Permission. What Next? »