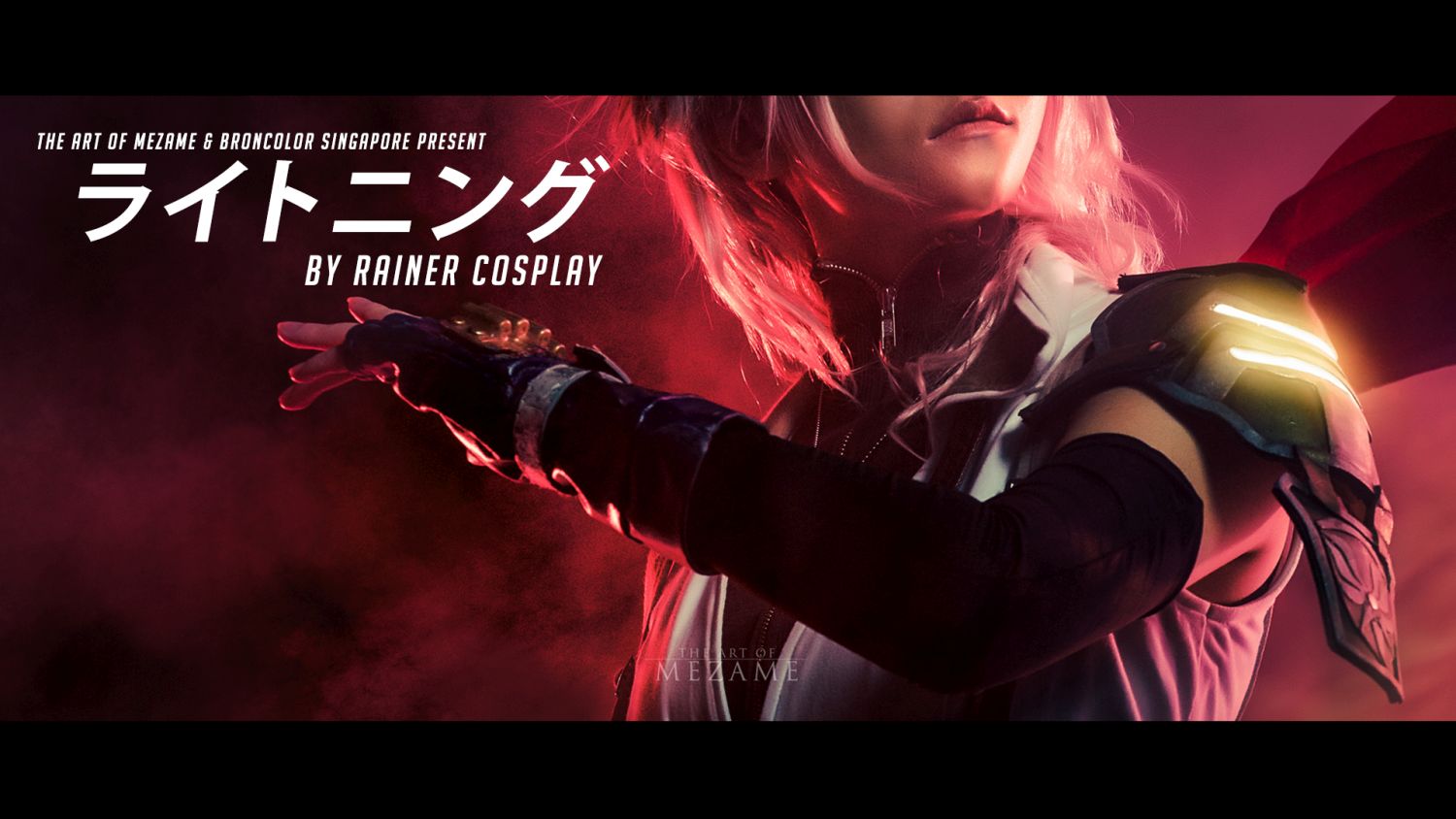 A while back, Eujin Goh from Broncolor Singapore approached me and asked if I would like to collaborate using some Broncolor gear in a conceptual photoshoot that I could hammer out.

I jumped at the chance and was thrilled to know that I would be using some of Broncolor’s latest tech – the Siros L system – a completely wireless battery-powered lighting solution for photography. You can even control the Siros L from your smart device if you download the Broncolor BronControl app for the iOS!

To sweeten the experience further, I got to shoot on the Phase One XF 100MP as well as the old but gold Hasselblad H3DII-39 (medium format) camera systems!

Storyboarding came next. I had to decide what concept to work on and settled on cosplay photography.

I gathered my team for this epic endeavour and got hold of Rainer Cosplay for an epic collaboration that saw us experimenting with water, smoke and fire. 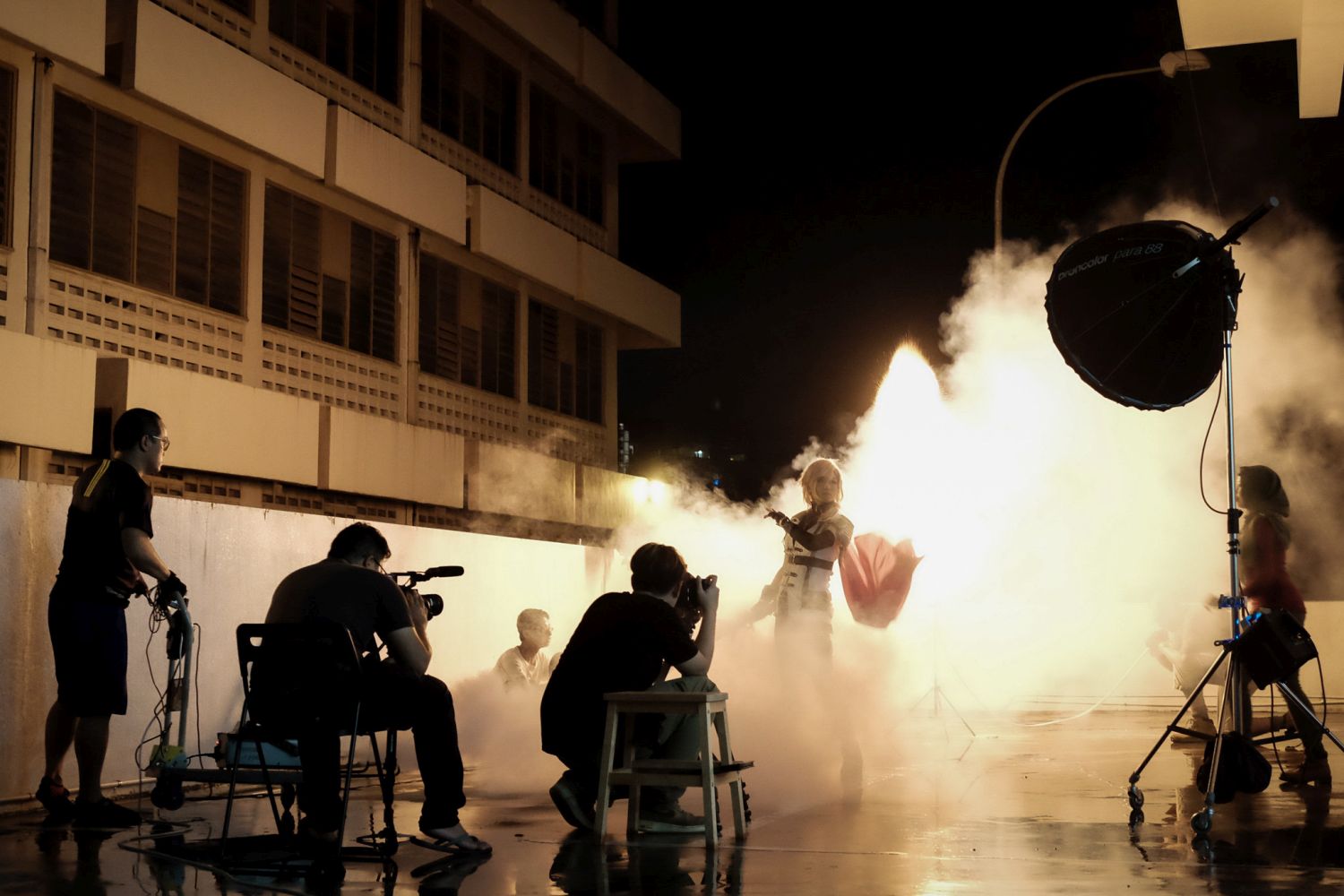 Putting together a photoshoot like this requires a lot of team effort! Photo: Penry Hoh

I had to figure out how best to portray Rainer Cosplay’s Lightning from Final Fantasy XIII in an epic setting that utilizes not just our elements of fire, smoke and rain water but to put the Siros L through its paces so it can truly shine (no pun intended), while elevating Rainer’s expertise to the next level. Her cosplay is truly awesome!

Throwing caution to the win(d)

We prepared our safety equipment (fire extinguishers are our best friend), took note of the nearest fire hose, alerted the building’s management on our intention to do a photoshoot and had a safety briefing for both crew and talent.

We also made sure that we had nothing flammable near where we wanted to do the fire effects. All these steps are really important. It is also equally important that people exercise caution whenever fire is involved to avoid accidents to both personnel and property.

I was aiming for a few really good shots. No more than 4 maybe. I wanted quality images out of this production, and not aim for quantity. 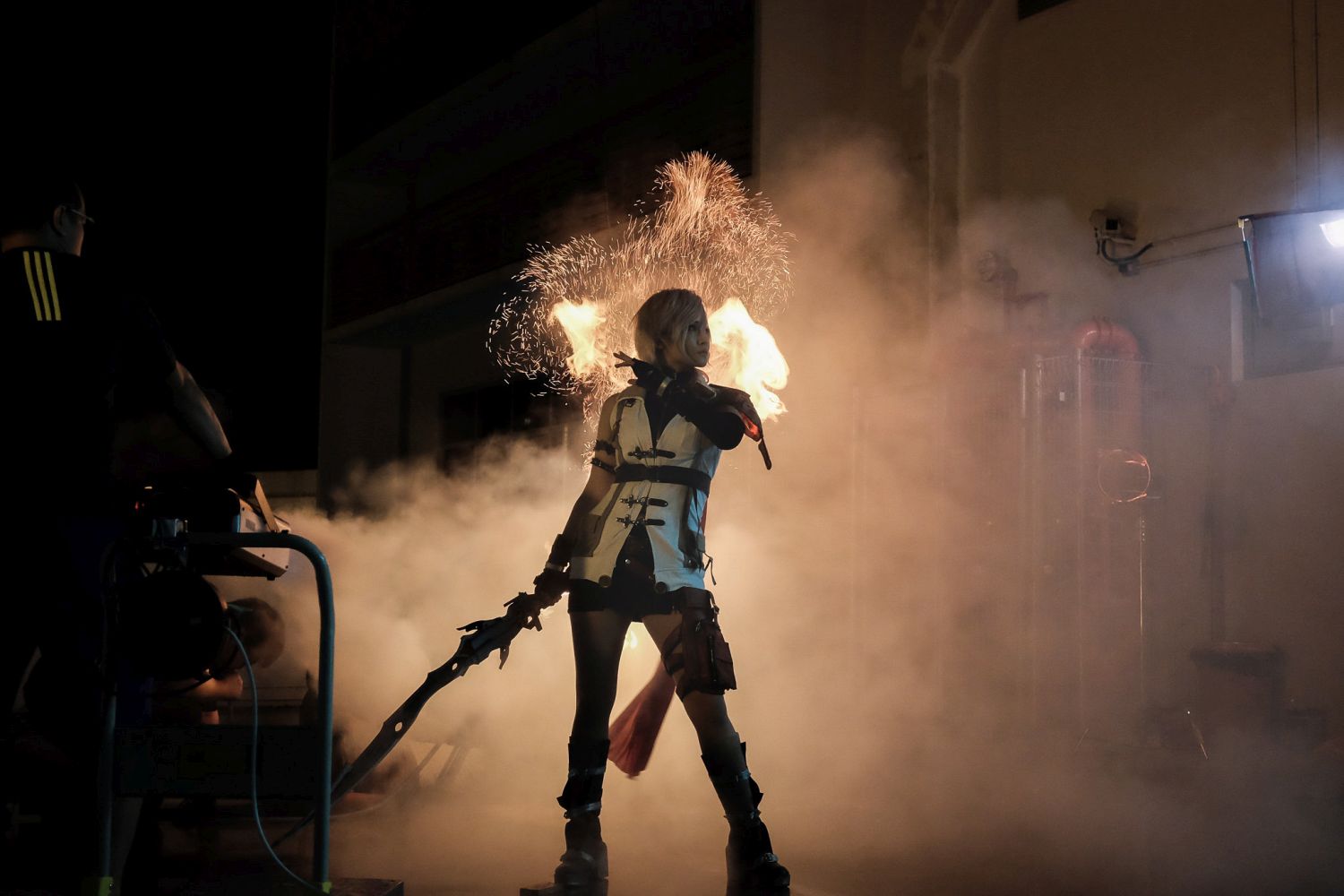 Did we get the shot? Maybe. But the cloak was down when the fire was up :( Oh well, let’s do another take then! :) Photo: Penry Hoh

Challenges are only source material for stories to tell our grandchildren someday!

It was a challenge coordinating these elements with unfamiliar gear outdoors to get the shots that we really wanted. It was my first time shooting with these cameras and lighting system.

I was very used to my old Canon EOS 5D Mark III and my current workhorse, my Sony A7RII, as well as my two Bowens GM 500 strobe lighting systems. But I kept telling myself that light is just light, and a camera is just a camera. They all function the same and are tools of creation. It’s just a matter of how you use them, I tell myself.

A good friend and mentor of mine, Benjamin Von Wong reminded me that I should not worry too much about the gear and be more concerned about the vision.

Although shooting with these gear did give me a huge sense of satisfaction, I had to keep in mind that without a vision, the tools would be a total waste in my hands.

Going crazy with the logistics

I was provided with a few lighting and camera equipment, courtesy of Broncolor Singapore. Here’s the complete list of gear at our disposal that evening.

Team Mezame brought along our own 1200W generic smoke machine, rain maker contraption that we made ourselves following schematics by Benjamin Von Wong, our firestarter contraption which was inspired by an episode of DigitalRev TV’s Pro Tog, Cheap Camera Challenge. 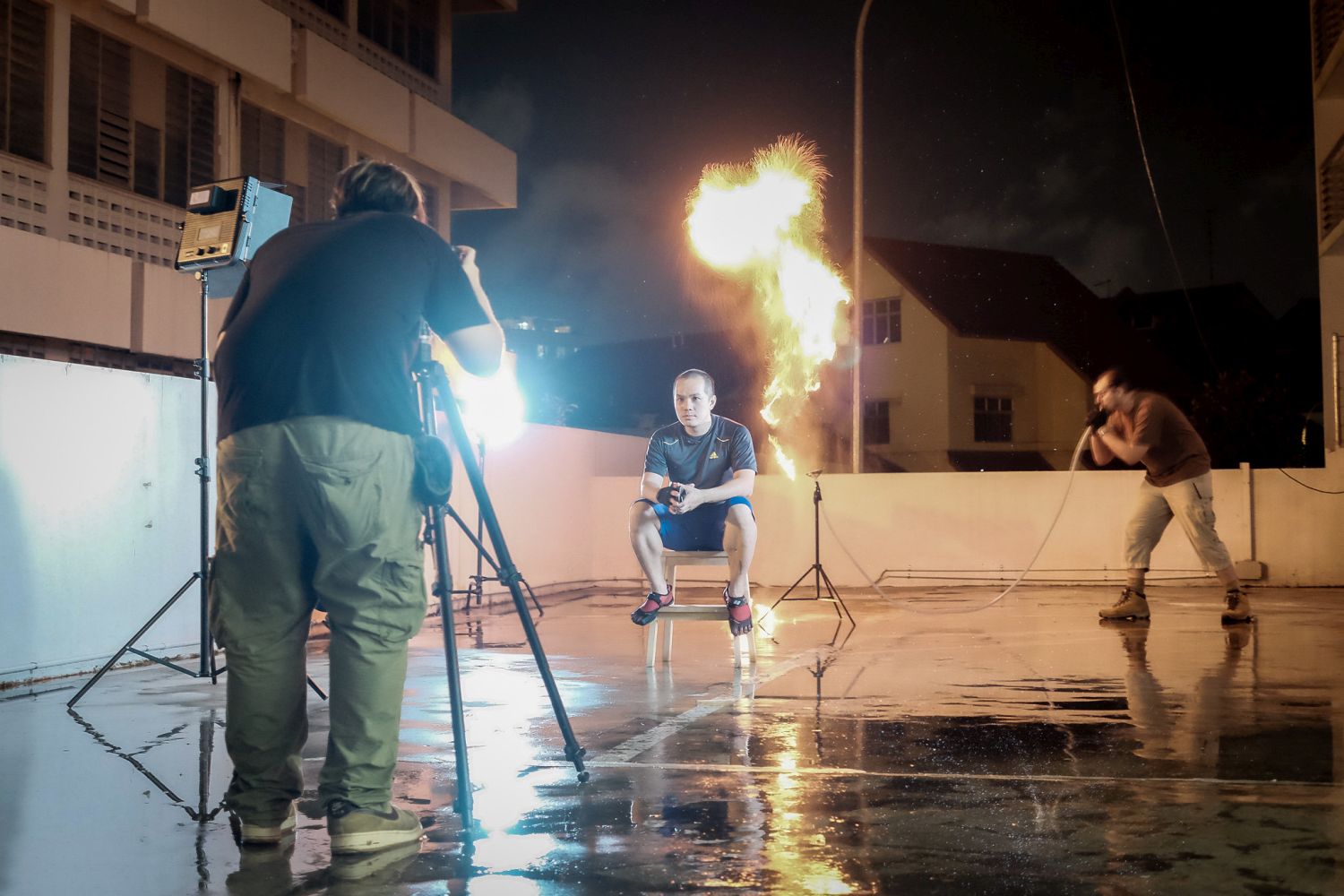 We had to test the firestarter first to make sure it works well and safely. Photo: Penry Hoh

We wanted to keep as much of the practical effects in the shot as we can. The studio fan was especially useful for giving the smoke and cape more volume. Rainer’s hair also had a bit of dynamic look about it thanks to the controlled wind.

Here is how the set looks like for both rain and fire configurations. 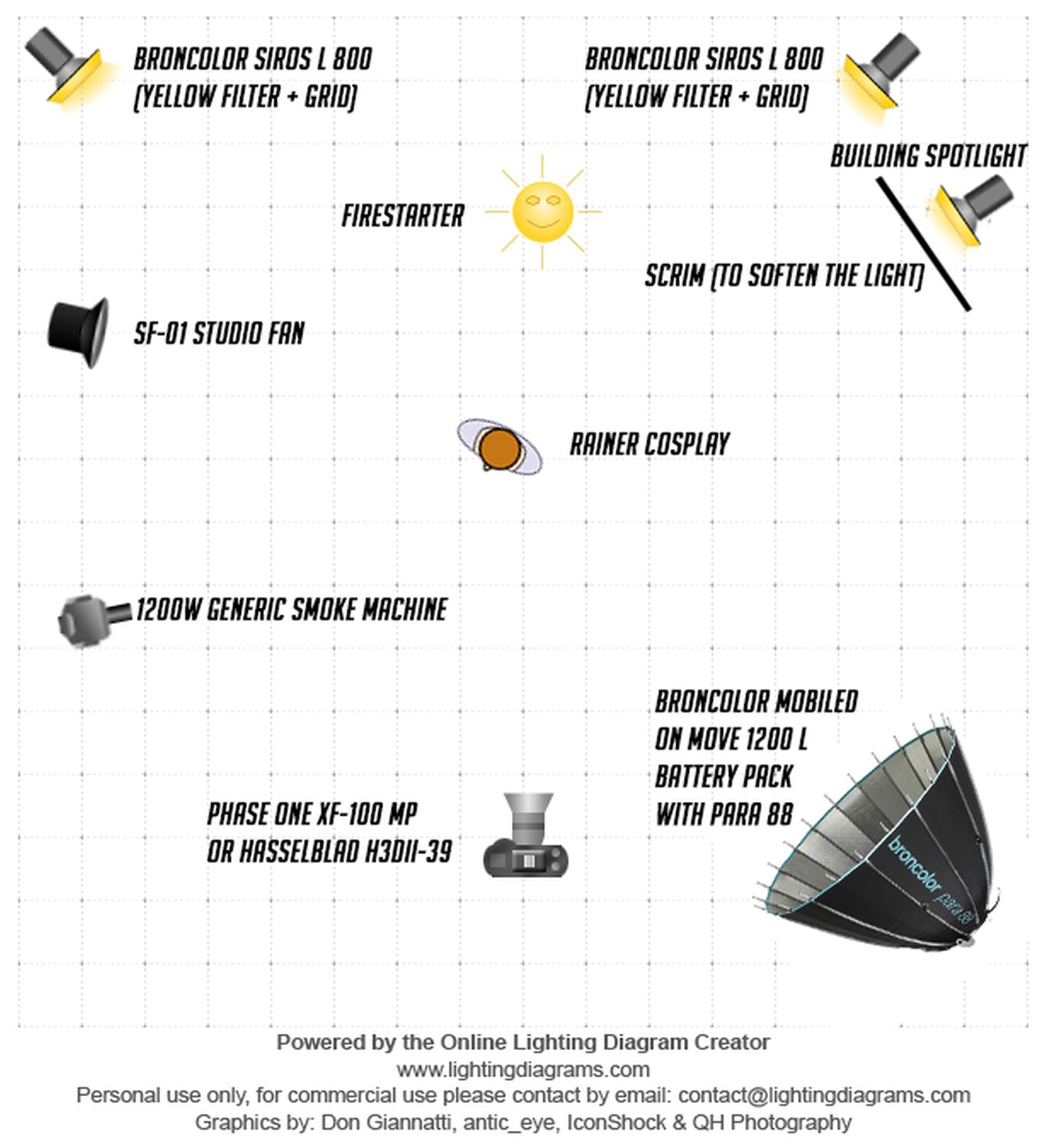 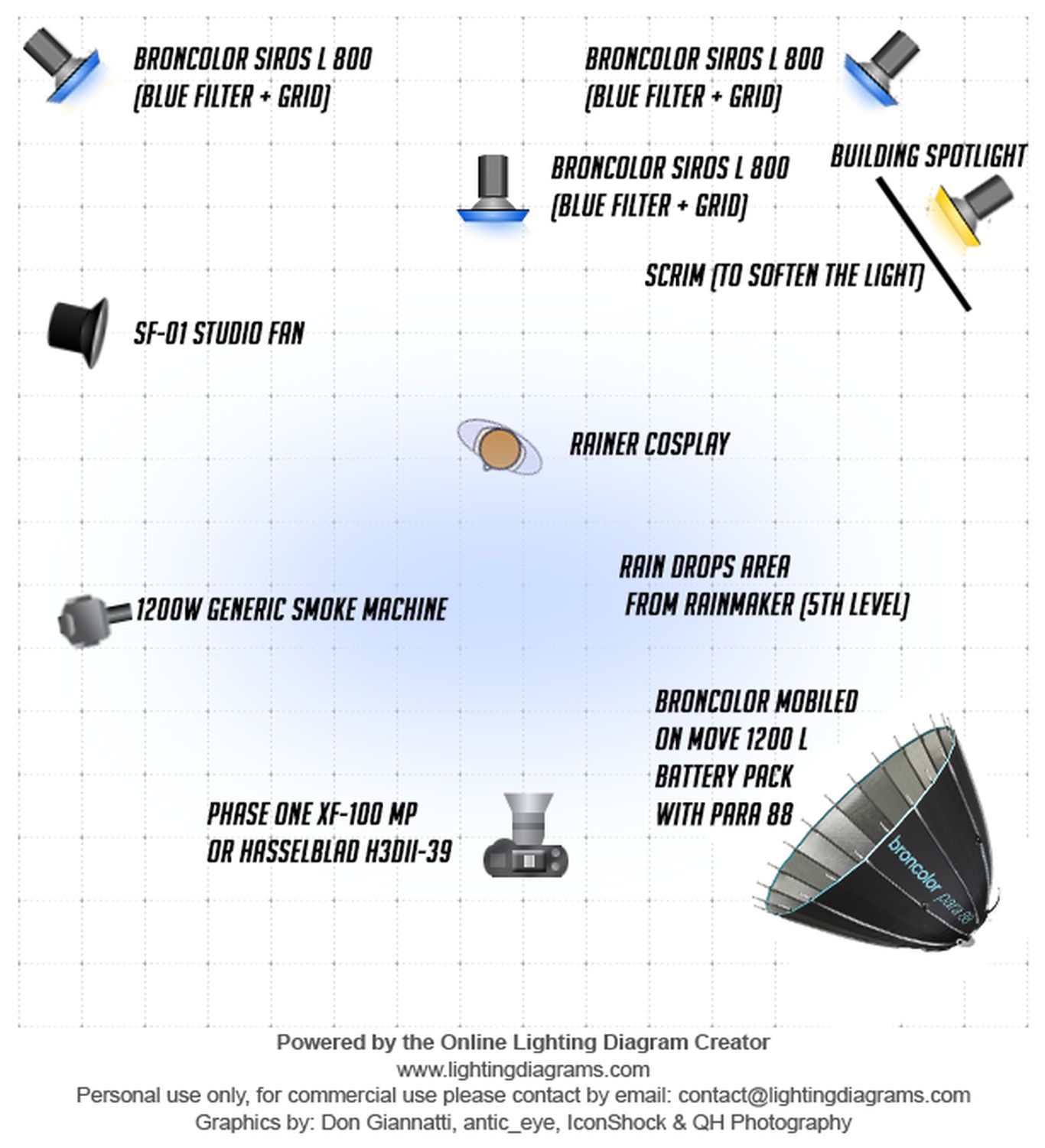 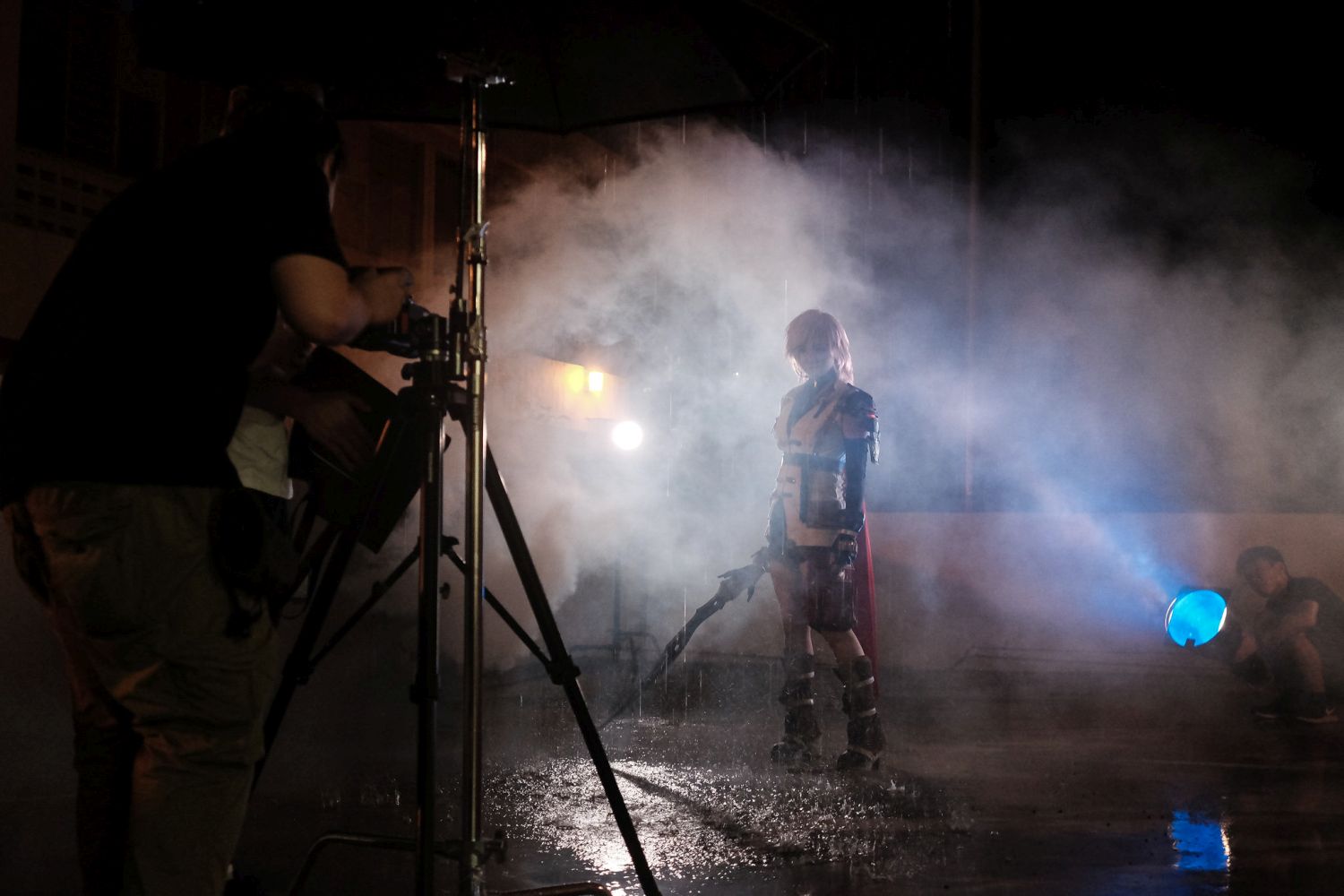 Knowing that I am a digital composite artist who is used to creating epic surreal and fantasy images through my photography and Photoshop, Eujin challenged me to get what I want in-camera (up to 90%). 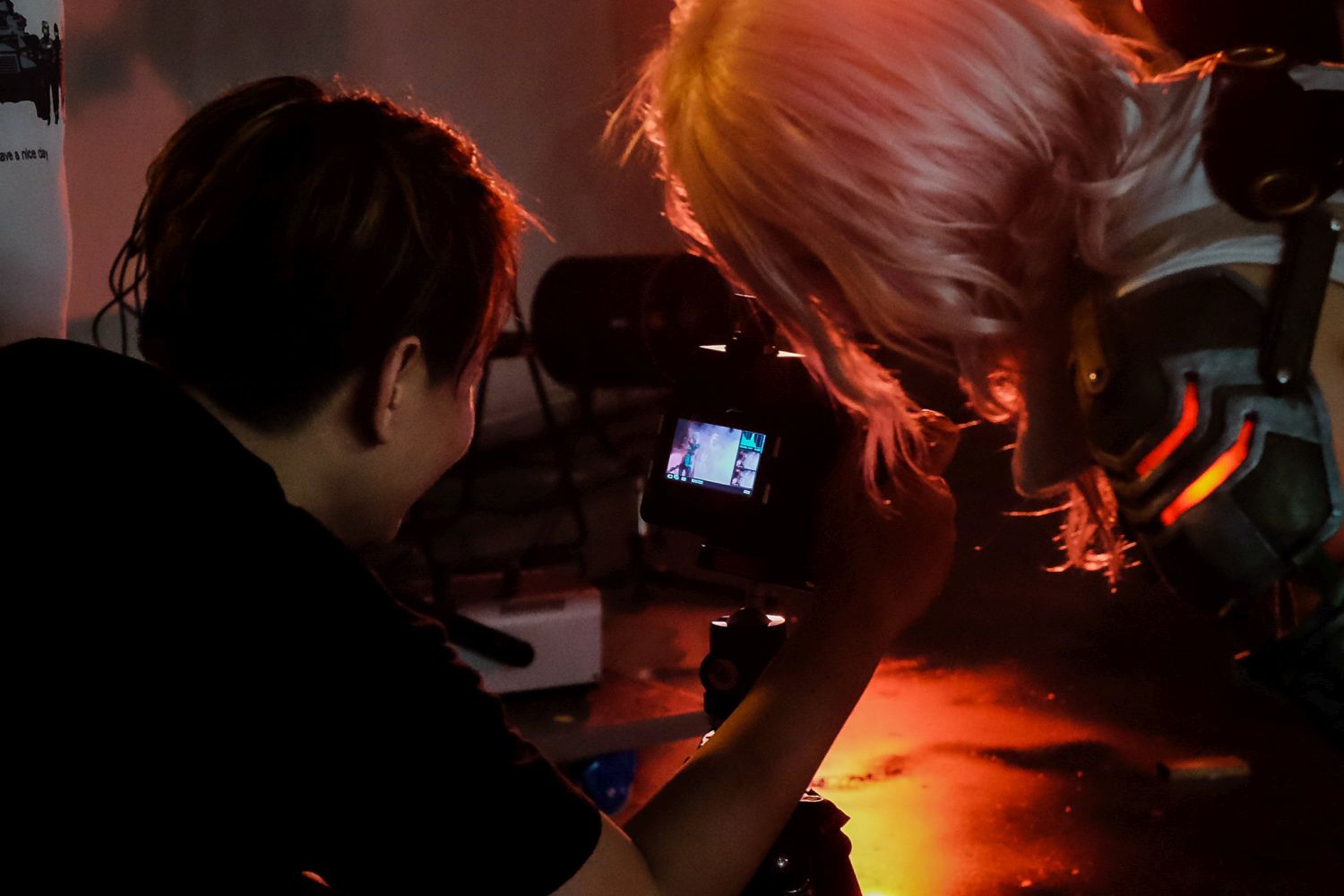 It is always good to encourage your talents by showing them the shots you have taken so far. This would enable them to be more comfortable. Words of encouragement can also make them feel more at ease and confident that your shots are making them look good. Photo: Penry Hoh

This effectively got me to re-think my shooting styles and encouraged me to utilize the Siros L effectively to bring out Broncolor’s renowned 3-dimensional lighting’s capabilities.

During the photoshoot, we did run into several problems that we had to fix on the fly. 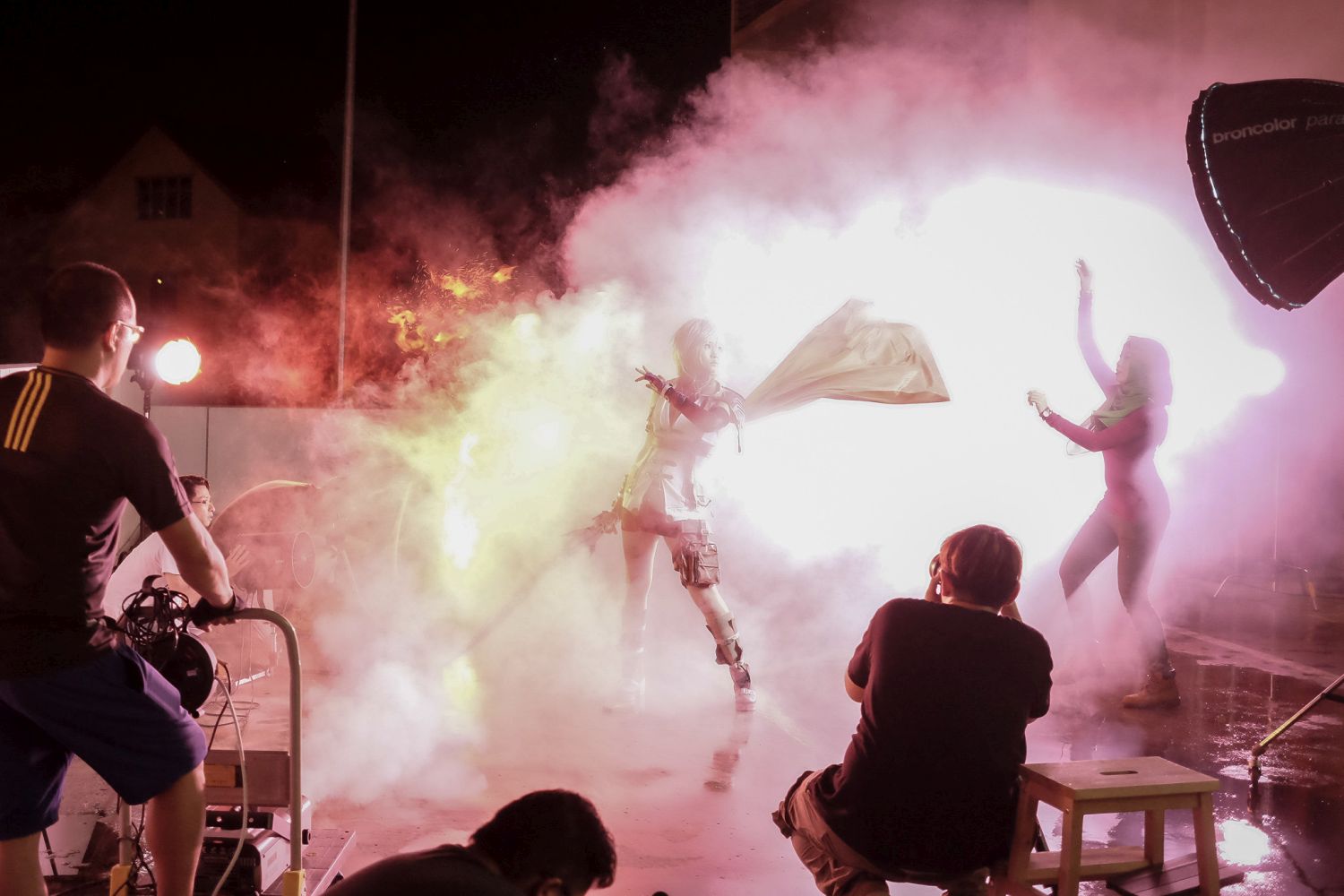 It would look really great to have the cape tossed in sync with the smoke and fire. But to be honest, it was hard doing so as the wind conditions kept on changing.

Safety was still a primary concern so we had the fire way back, away from the talent. The Siros Ls were even further but they were still powerful enough to cast a beautiful rim light on the talent.

At one point, the alley’s design made the wind travel in spirals like a vortex, causing us to cease the shoot for a bit due to safety and also because it was virtually impossible to have the shot we wanted.

We had to wait it out. 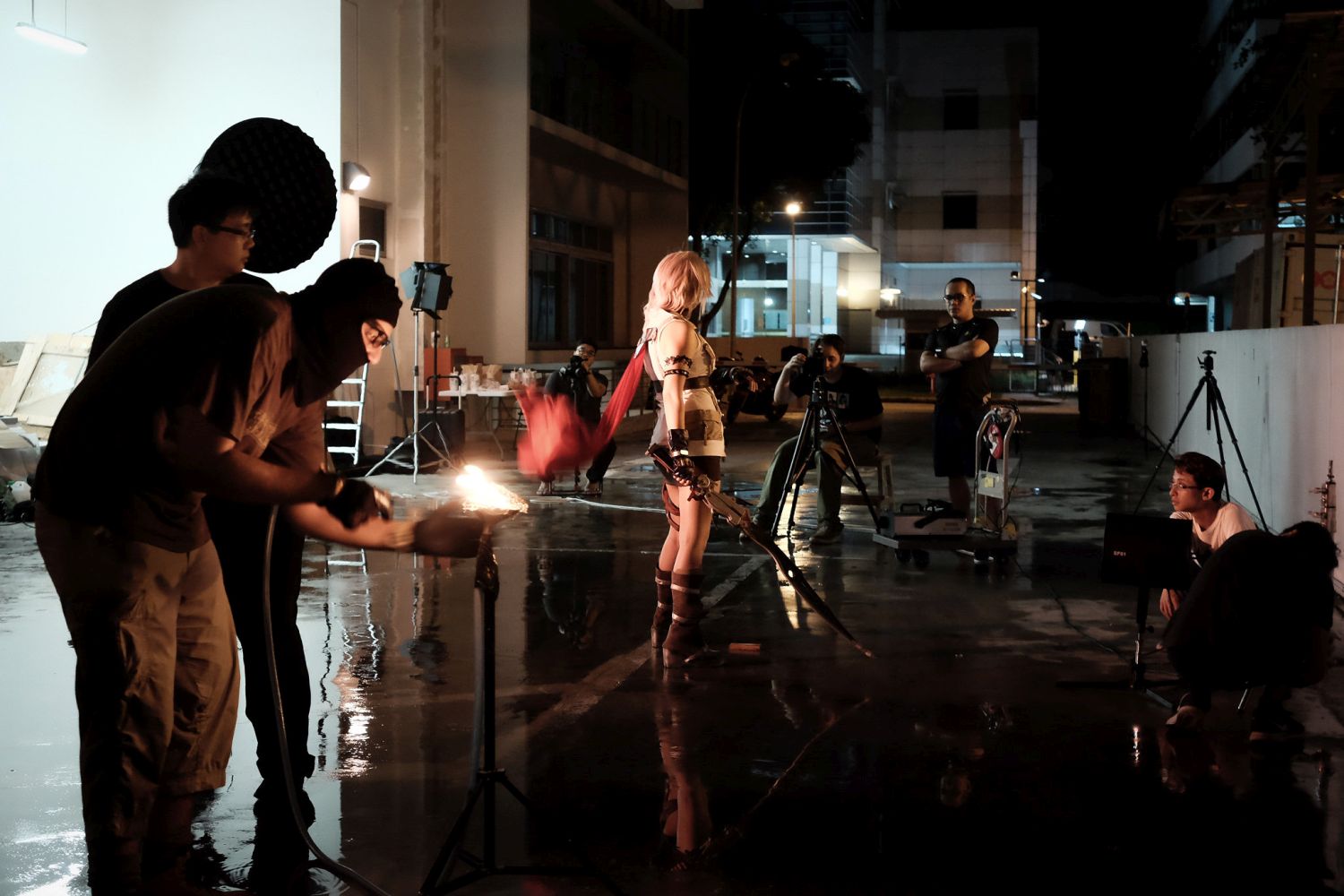 In the end, we had no choice due to time constraints but to do a composite of the cloak from another image we took and adjust a bit of the fire to make it look the way it was intended. Admittedly, we sort of did not achieve the 90% challenge but hey, we had to make do.

I really wish we got the image that we wanted in camera but fire being fire, when combined with wind, made things a big challenge. 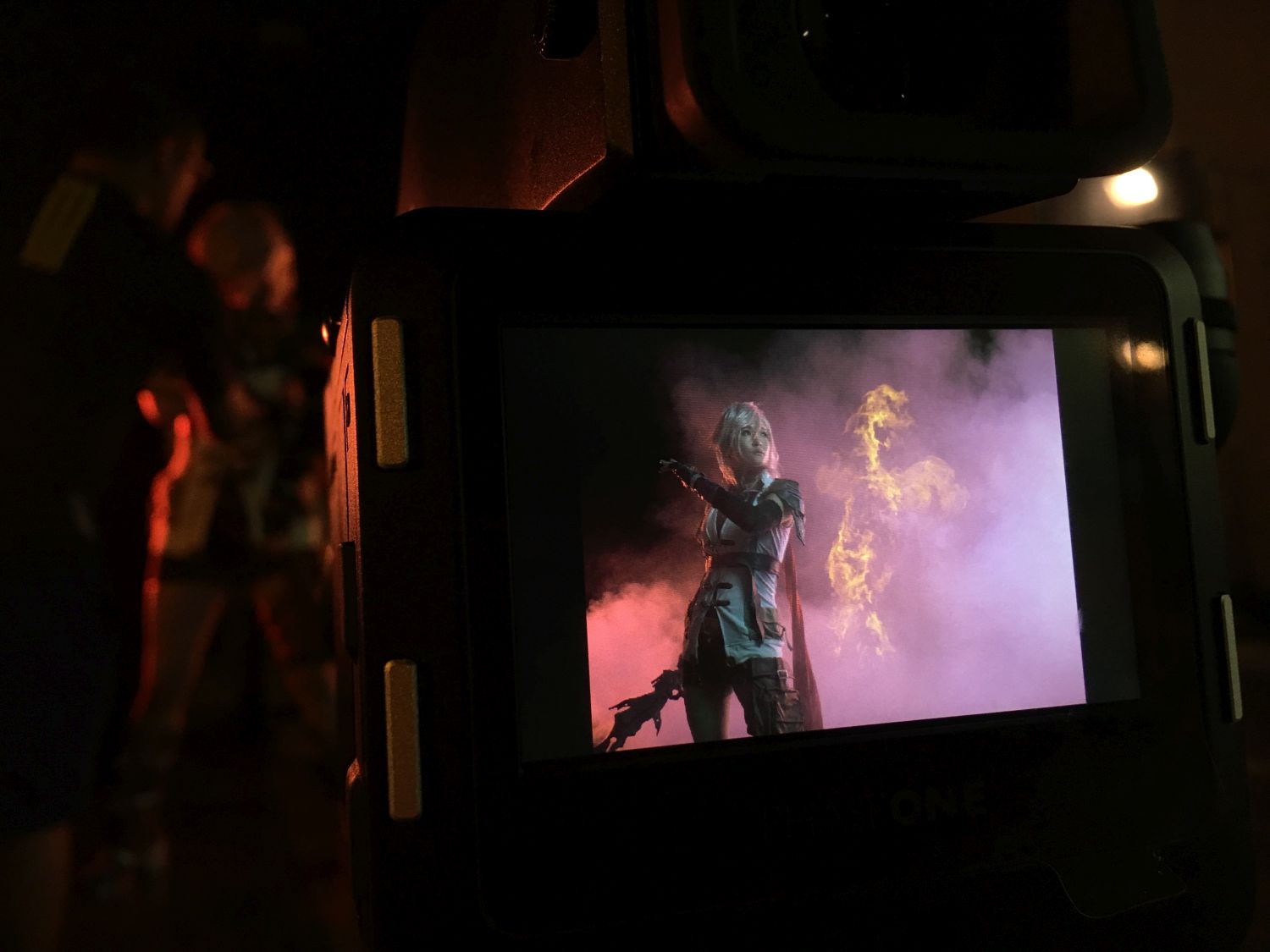 We managed to get Lightning Potter and the Order of the Phoenix. Photo: Mezame

We tried to keep the ISO low (400) and the Broncolor lights really delivered. They were simple to use, easy to set up, lightweight and we had no issues with consistency of lighting. Throughout the shoot, the colours were as they should be.

When I used the Broncolor Siros L lights for a commercial portrait photoshoot in a studio with my Sony A7RII with a Sony FE 24-70mm f2.8 G Master lens, the results were phenomenal too.

One thing is consistent – soft and even lighting across the board with beautiful highlights and shadows, working as intended and meeting expected results.

The modeling lamps on the Siros L was truly a godsent. Working on my old Bowens GM 500s outdoors can be hellish because they do not have modeling lamps and I had to rely on separate LED lamps for pre-focusing among other things.

The Bowens also required a boxy (and bulky) battery pack and a cable to connect to it to power it up.

The Siros L does not. Its internal battery can be removed and can be charged separately from the main body. The LEDs on the battery that tell me how much charge it has left is also very helpful.

If you have sufficient batteries, you can literally work with your Siros Ls outdoors for as long as you need. 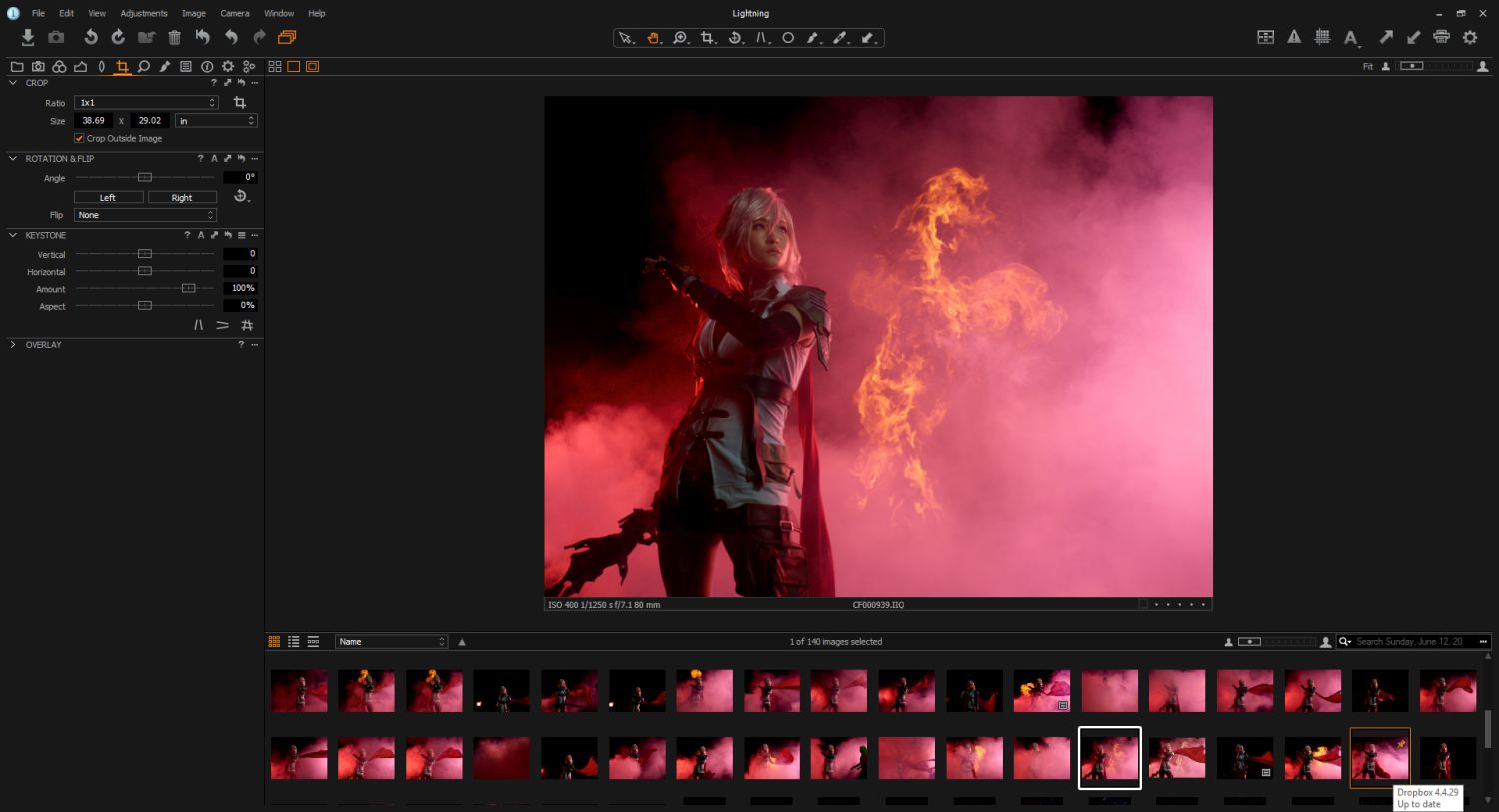 Straight out of the Phase One XF 100 MP. 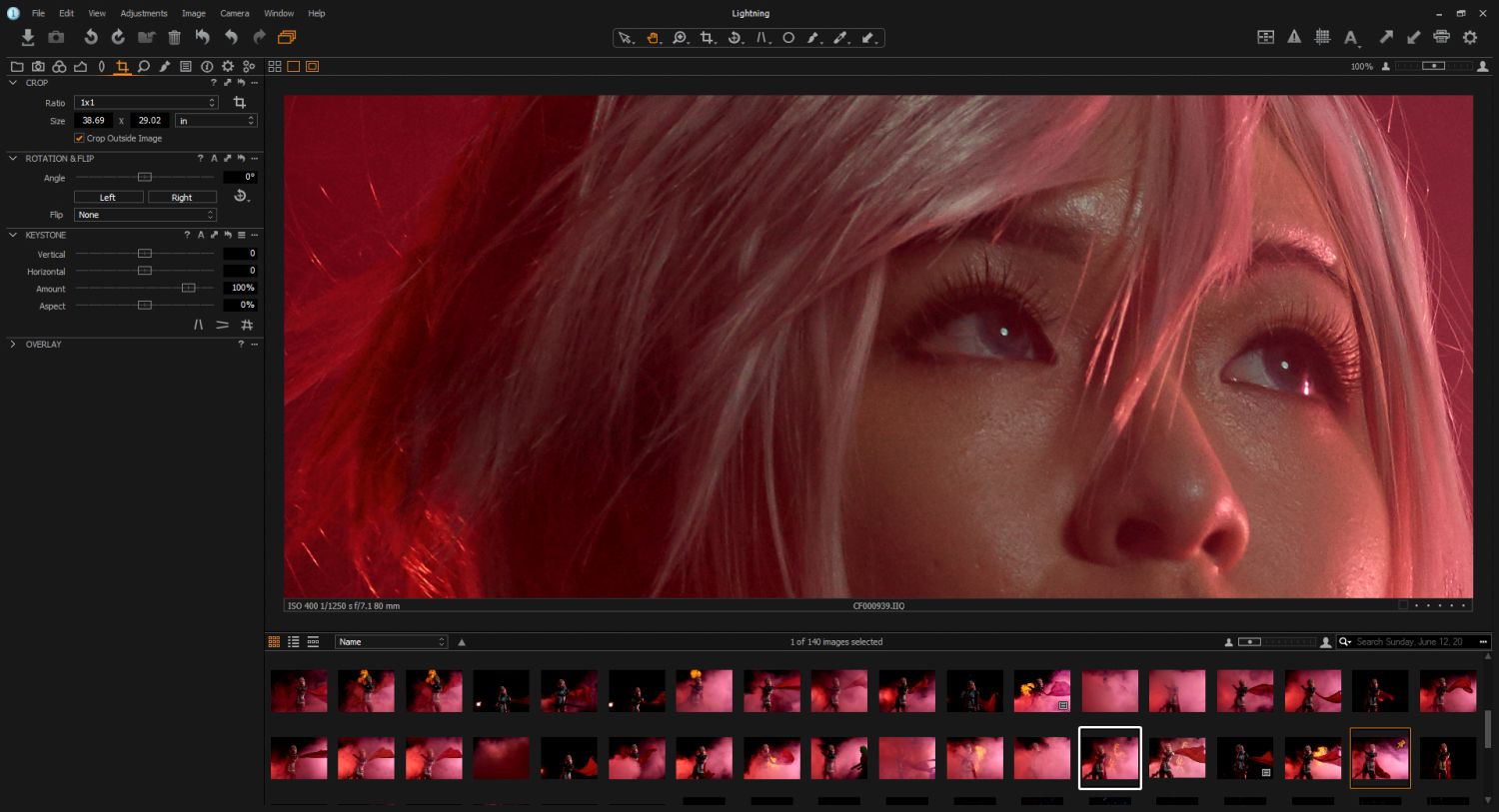 The Phase One XF 100 MP camera helped loads too, with its medium format sensor and 100 megapixel count of awesomeness. At 100% crop straight out of camera, the image is still sharp and you can see lots of details when we preview the images on Capture 1 Pro.

We had the Hasselblad H3DII-39 to try out too and attempted something a little bit more interesting. We wanted to capture streaks of rain and the only way to do so was with a slower shutter speed. 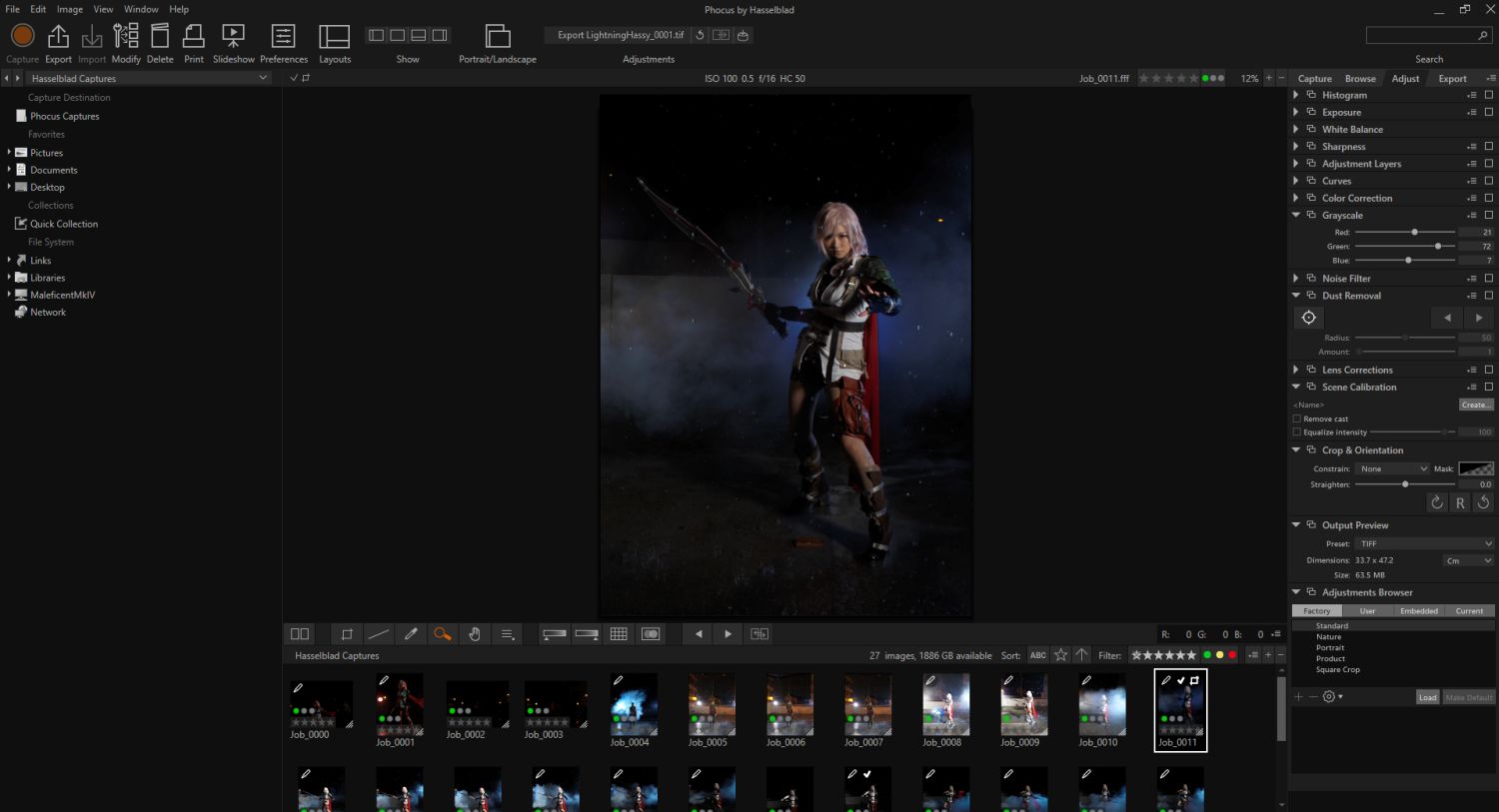 After the shoot, I processed the images on Capture One Pro, Phocus, Adobe Photoshop CS6 Extended and Adobe Lightroom, further enhancing them. 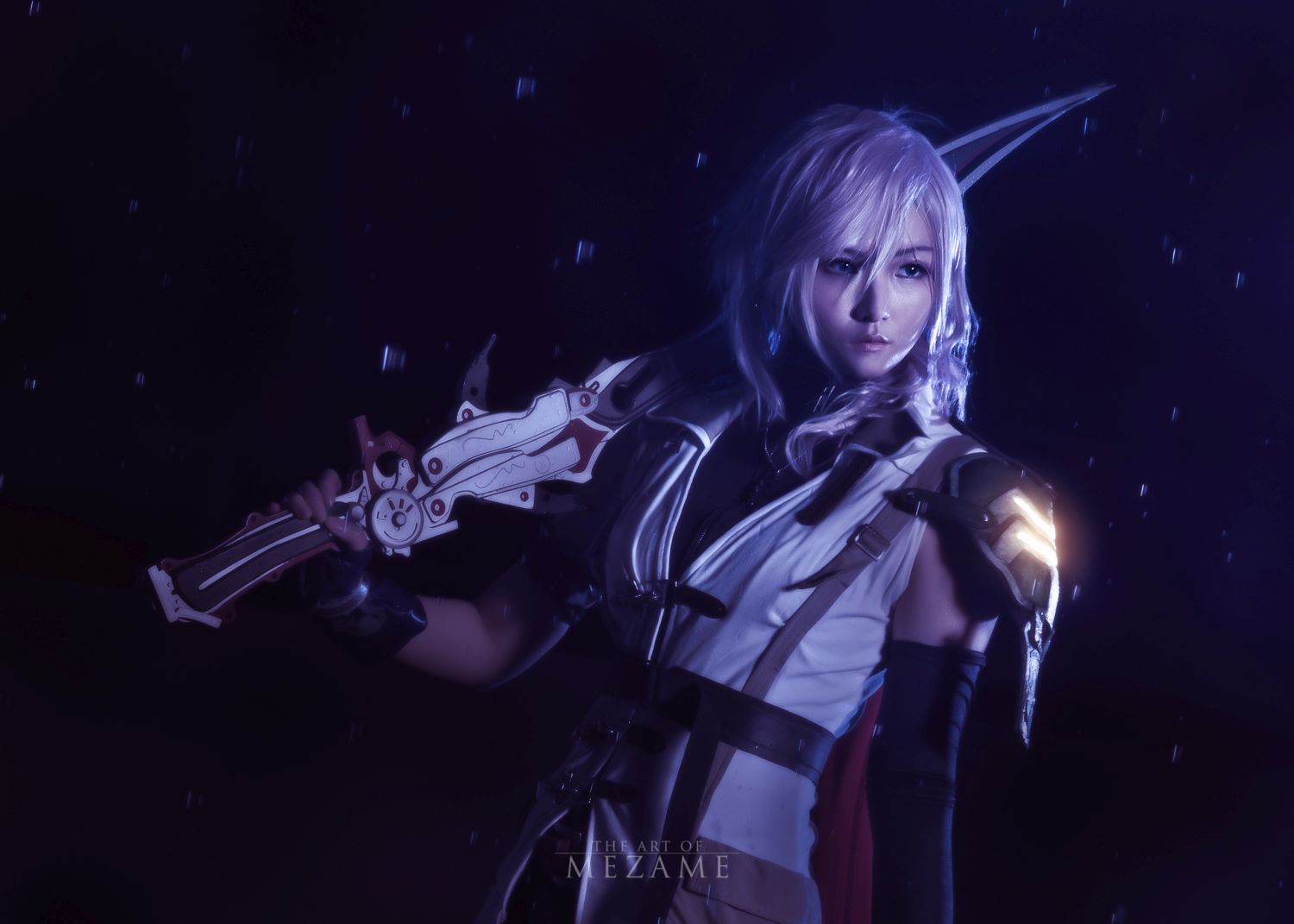 Taken with the Hasselblad H3DII-39 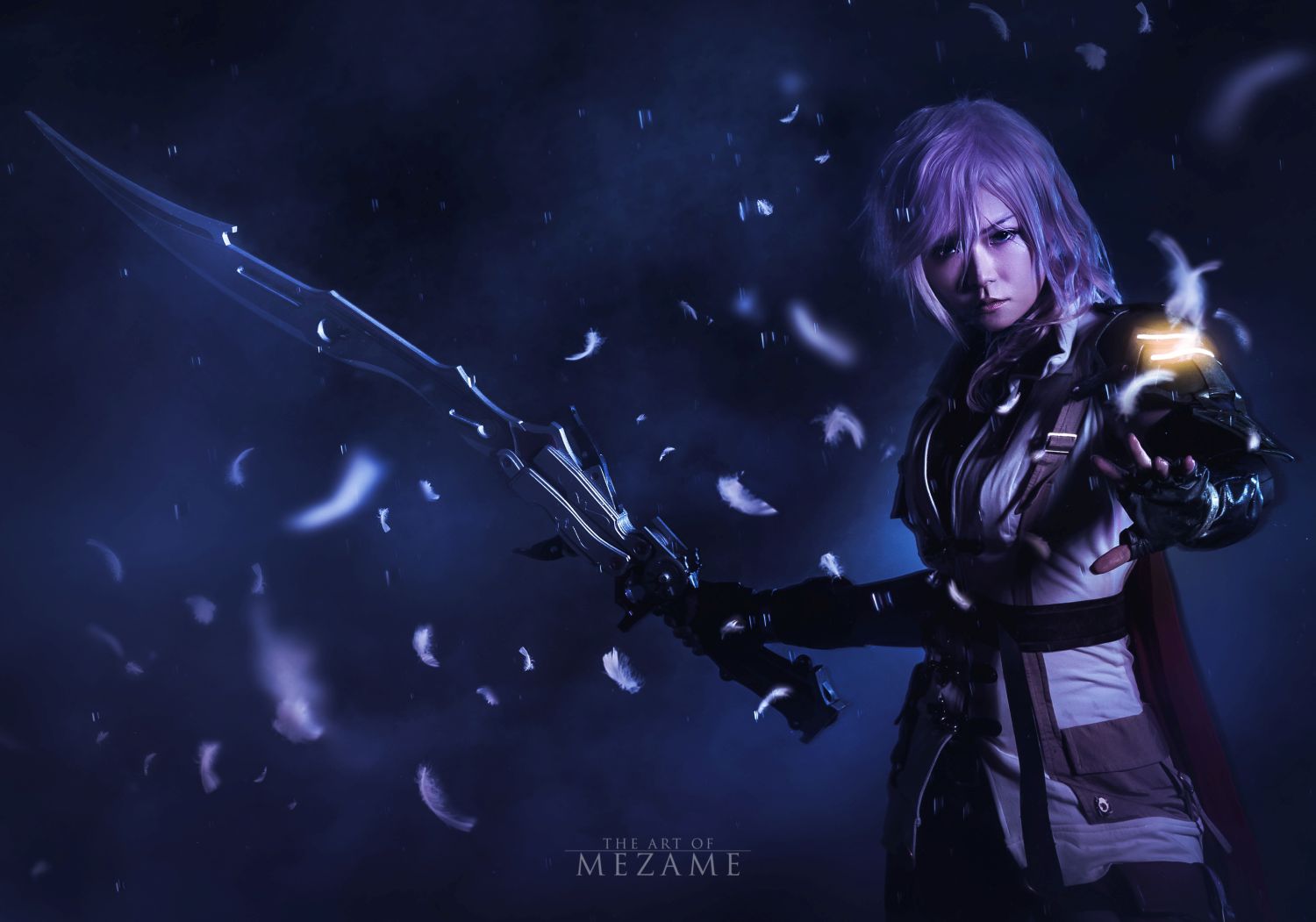 Taken with the Hasselblad H3DII-39, composite asset feathers from the Image Manipulation Store by DIYPhotography 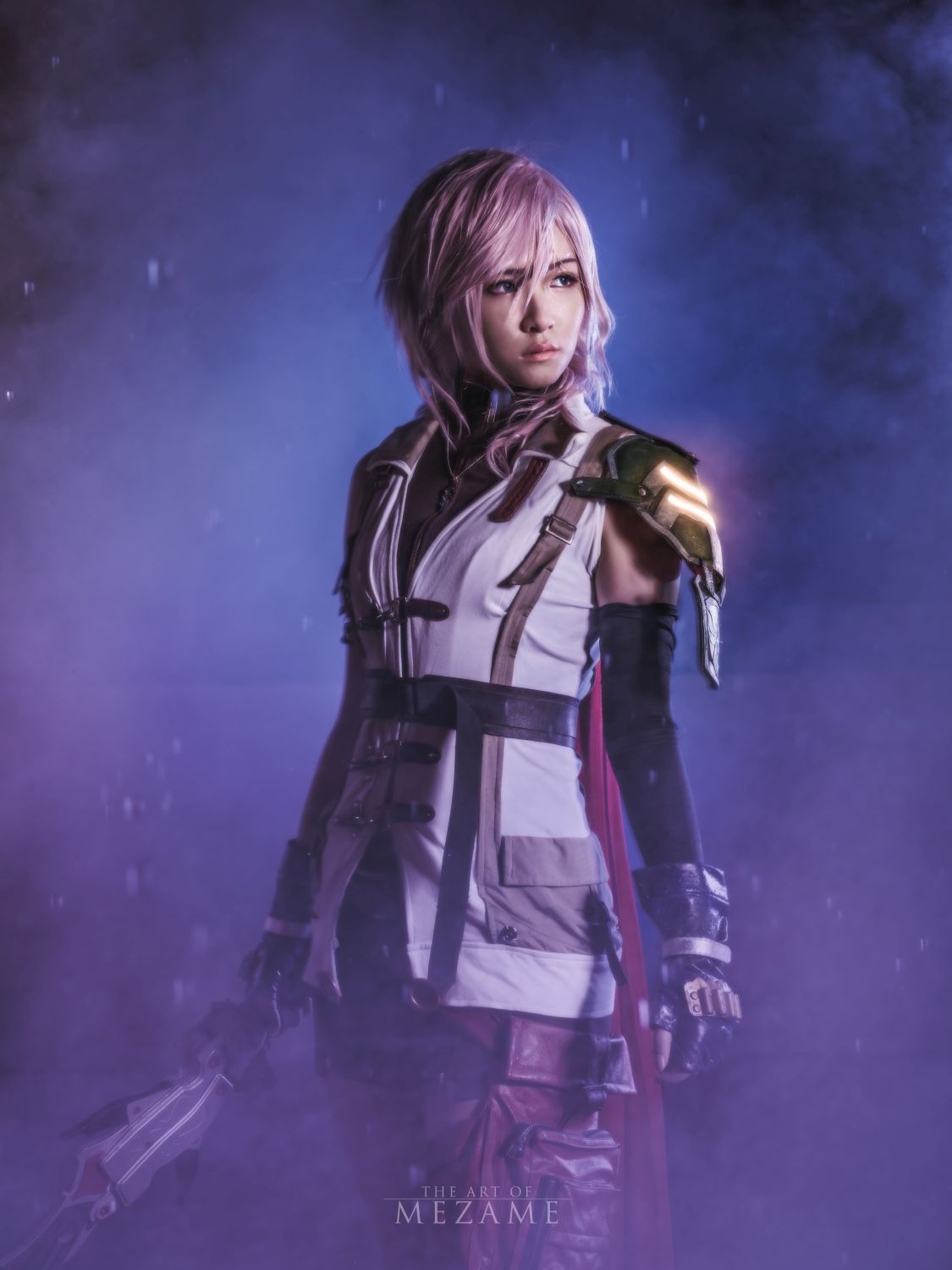 Taken with the Phase One XF 100 MP 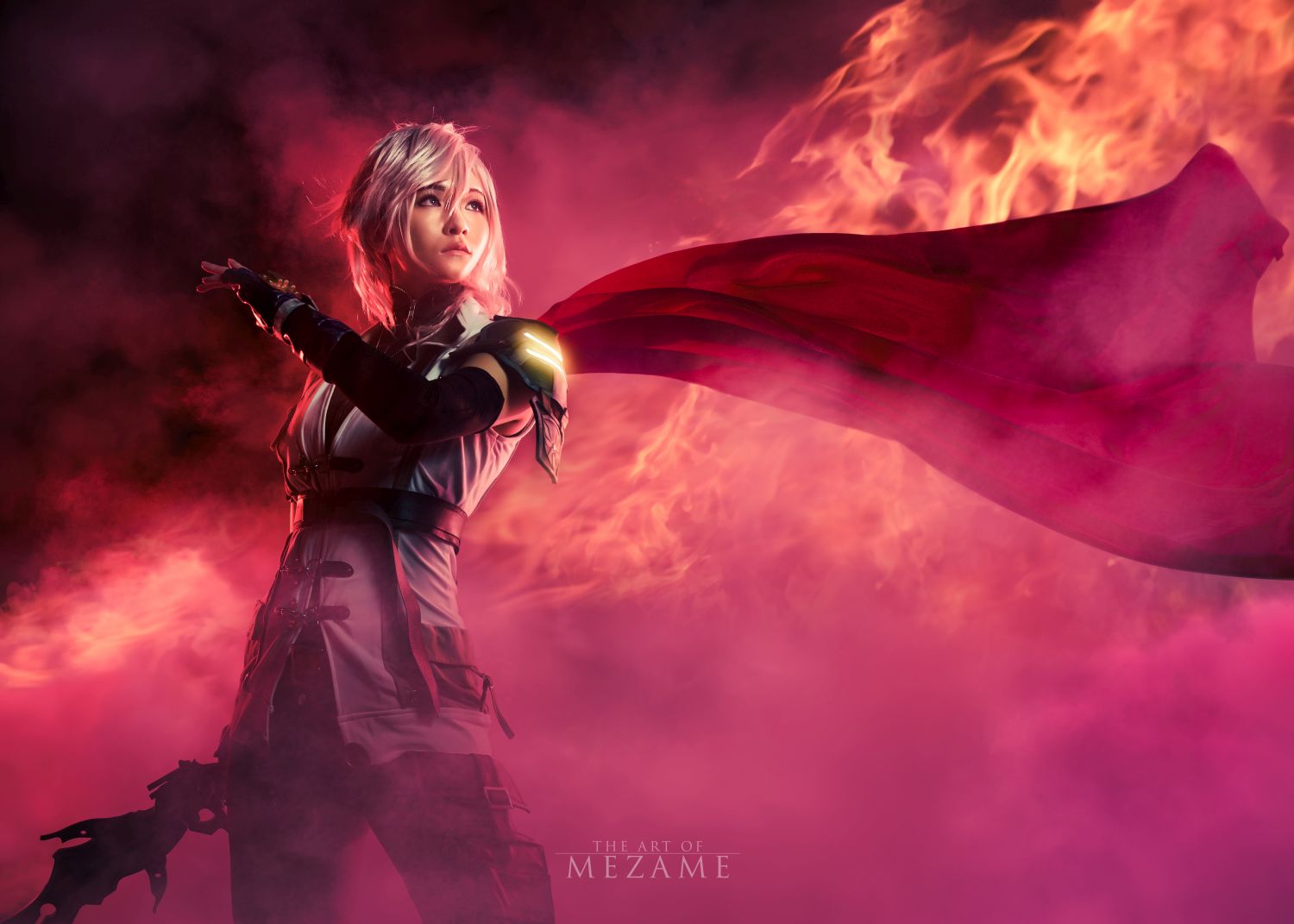 Taken with the Phase One XF 100 MP

Come 30th June 2016 (5pm-8pm), I will also be sharing my experience at the official launch of the Broncolor Siros L system in Singapore (somewhere in Marina). I hope to see you there! More details will come soon. Do check out my Facebook page for the latest updates.

In the meantime, check out this awesome video that showcases behind-the-scenes highlights from our collaboration with Broncolor Singapore and Rainer Cosplay! Do watch it in full-screen and share it if you like it!

Mezame Shashin-ka is a Cinematic Photography Director based in Singapore who combines fantasy and reality to tell a story. You can follow his crazy adventures on his portfolio, blog and Facebook page. This article was originally published here and shared with permission.

Insta360’s new Nano S 360° camera gets a 4K upgrade with 360° facetime and multiview video
« How to use curves to fix any colour problem!
Fathers and daughters: why do 2/3 of the population prefer that dads will take family photos? »