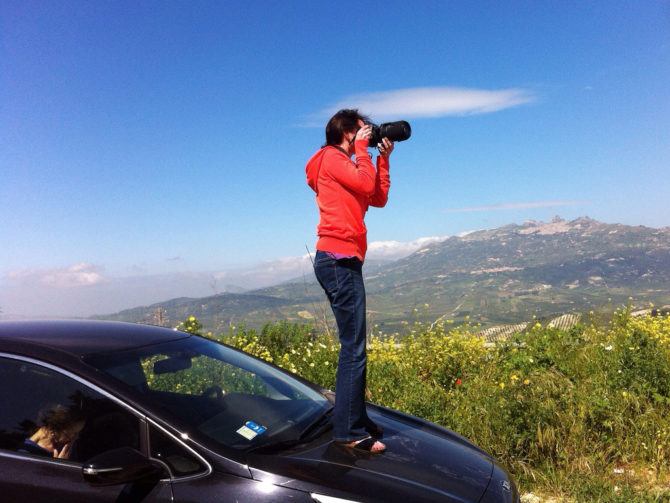 Me, taken by my father. How perfectly meta.

It’s Father’s Day today and accordingly, my email inbox has been deluged with gift ideas for fathers. Even if they are photographically inclined (you might not believe how many press releases I receive that aren’t even in my preferred ball-park) the chances are that they won’t present me with many opportunities to feature them. I was surprised then when something did catch my eye.

The press release in question concerned the results of a survey conducted by the photo-printing company Photobox that focused on the habits of picture-taking within families. Admittedly it was only a small survey, conducted on 2,000 people, but it threw up some interesting results—namely that almost two thirds of fathers (61%) believe that they take better photos than their other halves, and that 68% of mothers prefer that their families’ fathers take the photos. For me, this was especially noteworthy because it vindicated the conclusion of a discussion that I’ve been having since at least 2011.

The question that has been under discussion: ‘Where are all the women photographers?’ The conclusion? That girls being photographed by their fathers has a lot to do with it.

These are incredibly broad statements, with some far-reaching implications, so perhaps we should unpick them a little.

First, let’s take the question itself: ‘Where are all the women photographers?’ Before everyone beats a path to the comments section exclaiming that of course there are women photographers and proceeds to name them, yes, I’m well aware of this. For no other reason, I am a woman. (At least I was when last I checked.) Rather, it is a question of men far out-numbering women in the field.

If you have ever attended a photography workshop or seminar and conducted a quick head-count, you will have noted that men heavily out-number women. Go to Photokina, the Photography Show, or something similar, and you’ll notice that women are in the minority. A sample of the Photocritic Photography School sign-up statistics indicates that approximately a third of the students are women. Sure, there always have been women photographers and I’d like to think that the numbers are increasing, but we remain under-represented.

When I originally discussed this question with family and friends, several theories rose to the top. First, that it is the result of our patriarchal society. Second, that women are deterred by the perceived technical demands of photography. And third, because daddies take photos of their little girls. All of these theories have their merits and their flaws, but I don’t think that any can be dismissed.

Are girls and young women discouraged from pursuing photography because it doesn’t fit with our cultural narrative of how girls and women are meant to behave? Historically, well-to-do young ladies were expected to prove themselves ‘accomplished’: capable of painting, drawing, embroidery, playing musical instruments, and reciting poetry. All women were expected to contribute to the household, for example by sewing. While photography could be considered an artistic accomplishment for some women, for others it would be regarded as a frivolous indulgence that was beyond their families’ means. And most certainly the scientific demands of photography would have been a deterrent for many girls and young women. It is easy to dismiss these old-fashioned principles as not applicable today, but stereotypes have a vicious tenacity and while the original reasoning behind them might have long evaporated, the stigmas remain.

The scientific element behind photography is certainly worth investigating further as a potential impediment to women’s participation in in the medium. It doesn’t matter that women can drive cars, do qualify as surgeons, and are capable of piloting planes; there is still a pernicious assumption that women cannot engage with technological activities. This is both an external pressure (go back to the patriarchal notion of what women can and cannot do, also reflected in a 2011 Ofsted report (p.7) that children divide occupations along gender lines from a young age) and an internal doubt. In the Girls’ Attitudes Survey conducted by the Girlguiding UK asked 1,200 girls (some Guides, some not) about their attitudes to STEM (Science, Technology, Engineering, and Mathematics). Among many findings, it revealed that almost half of girls (53%) think science/engineering is too hard or complicated (source, p.15).

Does the technological element of photography deter girls from picking up cameras because it’s ‘not for them’ in a similar way that it deters them from pursuing careers in engineering? It’s not a difficult parallel to draw.

Finally, we come to the notion that fathers photographing their daughters discourages girls and young women from picking up cameras themselves. This is significant for two reasons: first, it encourages them to regard themselves as the subject of men’s gaze, as opposed to the director of the gaze itself; second, it doesn’t present girls and young women with any role models to whom they can aspire or seek mentorship. In particular it is this second argument that the results of the Photobox survey upholds. If men consider themselves to be better photographers than women and women prefer to be in front of rather than behind the camera, what kind of example does this set for little girls and young women? And research suggests that, whatever the discipline, role models are important (source, p.13).

More men take photos than women, and young girls don’t just see this, but experience it as the subjects of these photos. From a young age, they are conditioned into these gender-aligned roles.

There’s no single reason for men being more prolific photographers than women. It’s a deeply woven web of expectations, stereotypes, and opportunities. Thus if we are looking for better gender balance, then it has to be tackled on multiple levels. Will the ubiquity of the smartphone help to change the demographics of the photography population? I’m sure that it will have an impact, yes. But if daddies continue to be the ones with the cameras, then it will be a harder gender imbalance to right. A very good place to start is to encourage young girls to pick up the camera themselves because they can do it.