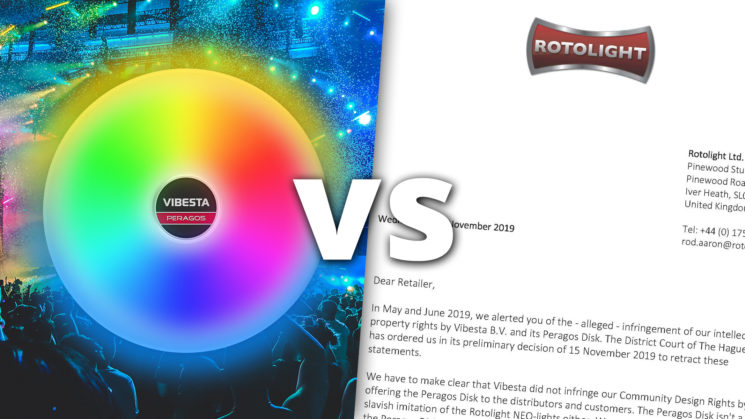 Back in May, Rotolight began legal proceedings against competing lighting manufacturer, Vibesta for alleged infringement of its intellectual property. The dispute was over the design of their Peragos Disk light, which they alleged infringed on design patents (amongst other IP) of the Rotolight Neo 2.

Now, Vibesta has announced that they’ve won a preliminary ruling on the case brought against them by Rotolight in The District Court of The Hague. They say the court ruled that the Vibesta Peragos Disk did not infringe on Rotolight’s design, and isn’t a slavish imitation of Rotolight’s Neo lights.

In recent months Vibesta was subject to public allegations by Rotolight regarding the design of the Vibesta Peragos Disk.

Now The District Court of The Hague in its preliminary decision of 15 November 2019 ruled that the Vibesta Peragos Disk does not infringe on the Community Designs of Rotolight and isn’t a slavish imitation of the Rotolight NEO-lights either.

At Vibesta we are happy that the court confirmed our independent design that was a result of our in-house R&D capacity and strong industry design team creating a product with unique properties and strengths.

Vibesta would like to thank our customers and friends for their continuous support and is looking forward to bring more leading products to the market.

Rotolight also sent out a statement to retailers and third parties that originally received letters containing the allegations, as ordered by the ruling. A copy of this statement was also attached to Vibesta’s announcement. 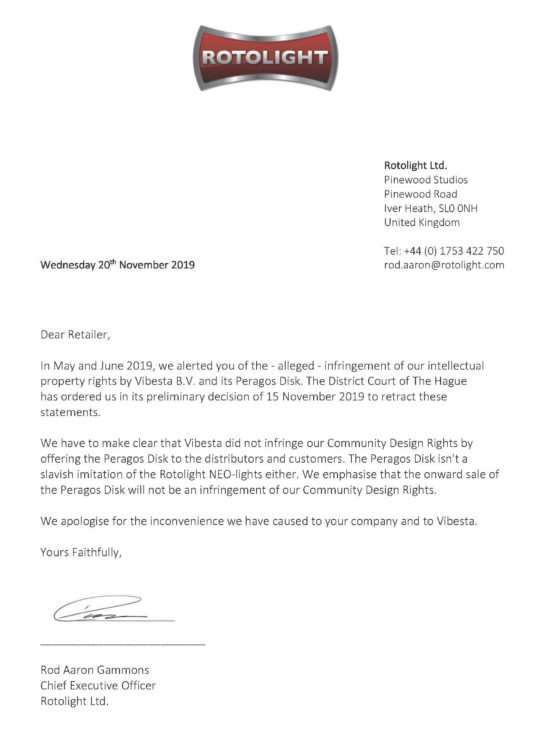 Update 29/11/2019: Rotolight has sent a statement to DIYP with regard to the initial ruling.

We are very surprised by the judge’s opinion, particularly given Vibesta admitted to the “accidental” use of digitally altered images of the Rotolight NEO to promote their own Peragos Disk in court (since discontinued and removed), and also that multiple journalists and retailers independently commented on the striking similarities between the two products. Whilst we respect the judge’s opinion, this is a preliminary ruling only, and we plan to appeal. We are confident to ultimately prevail in the months to come

So, it seems like a good result for Vibesta so far, but this is still an ongoing case and has not yet received a final ruling. And Rotolight does plan to appeal this decision. There are still a number of sections of Rotolight’s case which have not yet been addressed. This ruling only relates to the design imitation.

Rotolight says their original complaint included many other alleged infringements, including the use of copyrighted images used of the Neo2 in Vibesta’s marketing to promote their own product (now removed from the Vibesta website), SFX features (which Rotolight says told DIYP since been removed from the Peragos light), and their trademark.

This early ruling will do little to control the damage caused to the product by Rotolight’s allegations, which came just a couple of days after its release and causing a number of websites who had announced the launch of the Vibesta Peragos Disk to take down those articles and announcements. That will have likely had a not-insignificant impact on early sales with possible long term consequences for the product’s placement in the market.

On the other hand, Vibesta says they have not infringed on Rotolight’s IP. Then why, as Rotolight has informed us, have features such as SFX lighting been removed from Peragos? And if those features hadn’t existed in the Peragos light from day one, would it have been as attractive to customers in the first place? The use and subsequent removal of Rotolight’s own marketing photos from the Vibesta website also suggests that they had taken at least some “inspiration” from the Neo 2.

Note: This post was updated to clarify that this is just a preliminary ruling, which Rotolight plans to appeal, and that the case is still ongoing.

« This is how table affects light when photographing wine bottles
Is it REALLY time to upgrade your camera? »