B&H recently made headlines after being accused by the New York Attorney General’s office of being short on sales tax by at least seven million dollars over the past 13 years. They allege that B&H intentionally miscalculated sales tax in order to make their prices look more attractive to customers to outsell the competition.

A statement has now been issued by B&H spokesperson, Jeff Gerstel, disputing these claims, stating that their approach is the same way the entire consumer electronics retail industry works, and that the AG just wants to tax New Yorkers on money they haven’t spent.

The dispute is based around the way the discounts are applied. These are “instant rebates”, which the AG likens to more traditional mail-in rebates. With mail-in ones, you pay full price at the retailer (including full sales tax) and then mail in your rebate to the manufacturer to get a refund on a portion of your purchase price (but not the tax). The AG argues that this also applies to online instant rebates, even though the customer is only ever charged the final price.

Consumers pay sales tax based on what they actually pay. If you buy a $150 item on sale for $100, you pay $100 and pay tax on $100. If the Attorney General’s office has their way, customers could have to pay sales tax on the $100 actual sale price, plus an additional tax on the $50 discount that they received.

Common sense, and the law, says that this new tax on discounts makes no sense. That’s why virtually the entire consumer electronics industry takes the same approach to sales tax collection that B&H does.

B&H provided a brief list of the extra sales tax you might pay on some popular discounted items if the AG had their way.

To illustrate that B&H is not doing anything out of the norm, the statement also included price comparisons from six other major national retailers for a $650 item, discounted to around $500, showing exactly how much sales tax each of them collects on an order shipped to New York City upon checkout. 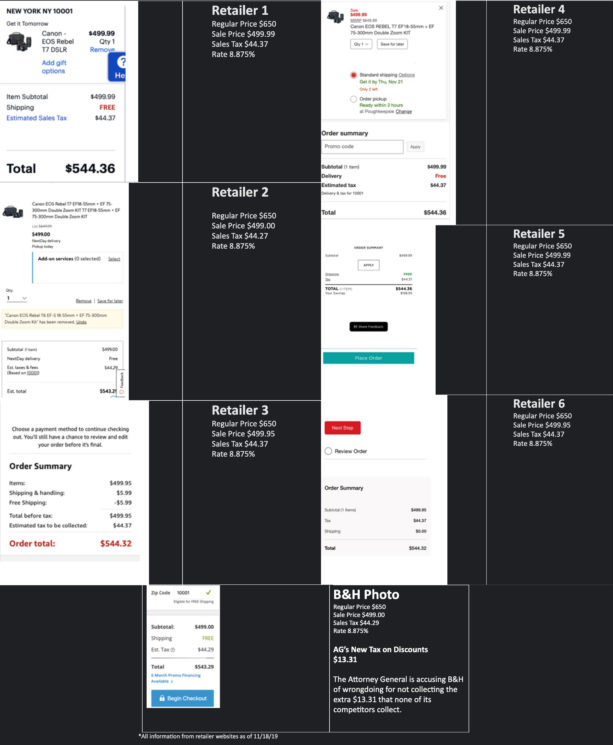 B&H says they are playing by the same rules as everybody else, and that NY State tax auditors have approved B&H’s practices through numerous closed state tax audits over the years.

You can read the complete statement from Jeff Gerstel and B&H here, courtesy of DPReview, and it makes for interesting reading. If B&H really is doing the same thing as everybody else, then either B&H seems to be being singled out, or retailers throughout the country have got it wrong when selling to New York residents.

You can read the AG’s lawsuit here.