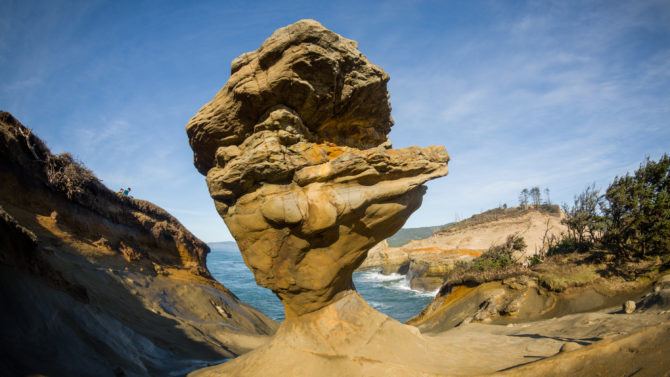 In what can only be described as another incident of mindless stupidity, vandals have destroyed an iconic sandstone pedestal at Cape Kiwanda on Oregon’s coast. Described by local residents as a “natural wonder” and often photographed by visitors, the “Duckbill” rock is no more.

A video sent to KATU News shows a group of people pushing the sandstone formation, bringing it to the ground. The creator of the video, David Kalas, was out with his friend flying a new drone when he heard a commotion. After going over to investigate, he saw a group of 8 people claiming they were going to topple the rock. When he saw the rock start to move, he started filming.

Initially, he laughed, because he didnt’ believe there was any way they could knock it down. Then, all eight of them started to push on the rock. Five backed away, and then he saw it start to wobble. A short time later, it fell to the ground.

Oregon State Park officials originally said that they didn’t believe the damage was caused by humans. The video evidence seen since, though, is impossible to dispute.

I asked them, you know, why they knocked the rock down and the reply I got was [that] their buddy broke their leg earlier because of that rock.

They basically told me themselves that it was a safety hazard, and that they did the world or Oregon a favor.

Even if they genuinely believed they were doing the right thing, the Duckbill was roped off to visitors. If visitors aren’t supposed to go anywhere near it, then it can’t be much of a health hazard. Also, there are much safer ways to go about reporting such things. That it was roped off suggests authorities were already aware that it was a potential danger.

It seems very much a “We’re going to do something stupid to protect other stupid people” mentality. Either that, or they were showing off for social media. It wouldn’t be the first time natural beauty was destroyed for the sake of a few likes. It isn’t the first time we’ve seen stupidity exercised at national parks, either.

Kalas says that he does not know who the people in the video are. After confronting them, he says they disappeared before he had a chance to call authorities. He would like to know who they are, though, so that they can “learn a lesson”. His fear is that they will do this elsewhere.

“Got him!” the vandals said when the rock toppled. Hopefully it won’t be too long before the police are saying that, too.

What do you think? Were they genuinely concerned about safety? Or was it just another act of mindless stupidity? Let us know your thoughts down below.