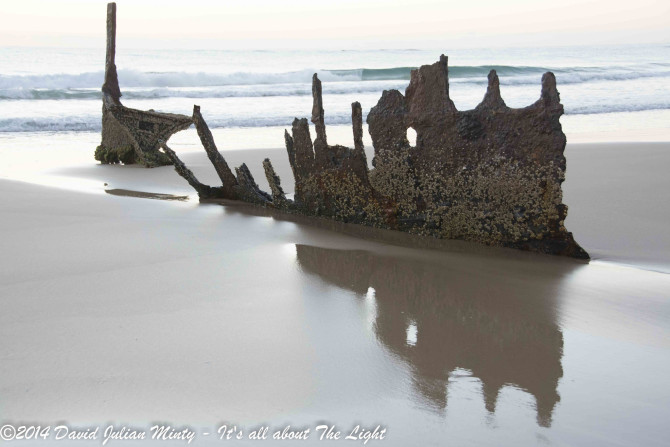 Photographers love taking pictures of shipwrecks, washed ashore by the tides. The older and more barnacle crusted the ship carcass, the better. Photographers will sometimes travel great distance to snap photos of some of the more renowned sites and, as Australia photographers are discovering, will even assemble (in surprisingly large numbers) to photograph them. When it was made public that Sunshine Coast Council would be removing the remains of a the S.S Dicky, a ship that washed ashore some 122 years ago–local photographer,  Kate Wall, organized one last bruhaha.

More than 40 pro and amateur photographers showed up to Dicky Beach (it was named after the famous shipwreck) on early Sunday morning to photograph the ship one last time.

“I thought it would be a good idea to get everyone together and farewell it on behalf of the photographers…”, explained Wall, who also noted she was sad to see the wreck go, but understands the safety concerns were it to be left.

In the past several years, workers have made efforts to preserve the wreck site, including coating it with anti-rusting agents, but it was too little, too late according to another local photographer, Nicola Brander, who regularly made the hour long commute at 4am to photograph the piece of history. “As a photographer I love to photograph it because every morning it gives you something different, depending on weather each time you get a different mood and light, it has a lot of character the ship wreck itself,” Brander described.

For those who live close by to Dicky Beach and want to see it before it is removed, the Sunshine Coast Councel says you will have until July 30th. At that point, the S.S. Dicky will be cut into pieces and moved–part of a $180,000 project–to a nearby inland site where pieces of it will go on display.

Legendary Photographers Pose With Their Most Iconic Photographs

« Humor: This Diagram Shows The Creative Fear Of Committing Work
I’m Sorry, but I MUST Disagree »