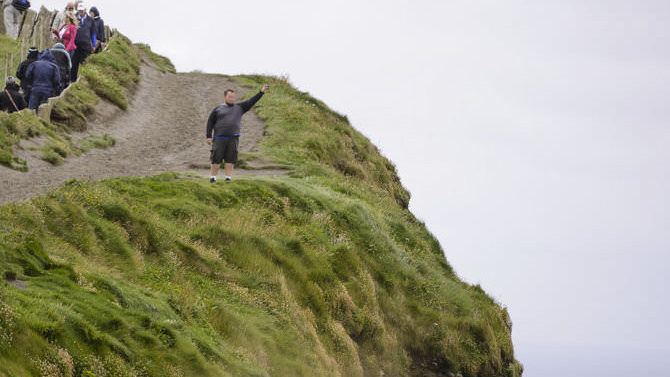 I arrived in Ireland a couple days ago, and I have been taking plenty of photos along the way. I’ll post them in future articles, but there is something more important to discuss for now: the dangerous, idiotic behavior I saw at the Cliffs of Moher.

The Cliffs of Moher are one of Ireland’s most iconic sights. At upwards of 700 feet (210 meters) tall, and dropping directly into the sea, it is no wonder that they are such a well-visited place. Unfortunately, as in Yellowstone National Park, this popularity comes at a price. Not everyone follows the established trails rules, and several people die each year falling off the cliffs; in fact, to warn visitors of the danger, a memorial statue was placed at the path’s trailhead. 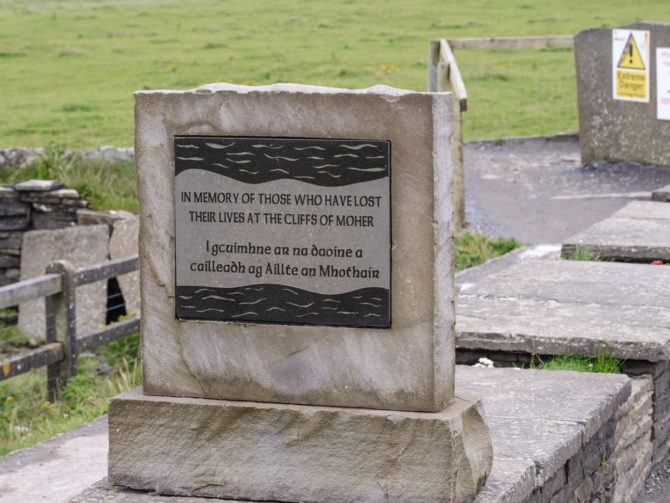 A memorial statue at the start of the trail — and an additional warning sign in the background.

I spent a couple days photographing this area, and I had a couple takeaways from the experience. First, if sunset is nice, the light on the cliffs is truly beautiful. It isn’t a particularly easy landscape to shoot, and the best vantage point is somewhat over-photographed, but it is still an incredible sight. The more important thing I noticed, though, is the horrifying behavior of photographers and tourists approaching as close as possible to the edge.

These photographers were nearly walking over a cliff. Consciously. Some were posing for their friends, others were photographing the landscape, and many were taking selfies. It was dangerous and careless, especially considering the weather; there was a light rain, and gusts of wind were upwards of 30 mph, or 48 km/h.

And then a woman slipped. She was sitting with her legs over the edge of the cliff, and her friend was taking a photo with the ocean in the background. As she stood up, her foot caught a path of grass, and she landed on her knees at the edge. Luckily, somehow, she caught herself and did not fall over. She laughed it off quickly and walked back to the path. I felt sick to watch — as, I know, did a dozen other people who saw.

In the next thirty minutes, I spotted six more people walking within arm’s length of a 700-foot drop, enduring strong winds and wet, slippery grass. Tourists were so engrossed in taking pictures that they seemed to ignore the deadly drop-off entirely. One woman even did yoga poses on the edge while her friend took pictures.

What is it about our culture that we are willing to pose on the edge of a cliff in order to take a photo? Is it a desire to seem daring and adventurous, or is it simply a misunderstanding of the dangers that a place like this can pose? Certainly, the reason is not to take better pictures; whether or not you are on the path, the view is exactly the same. 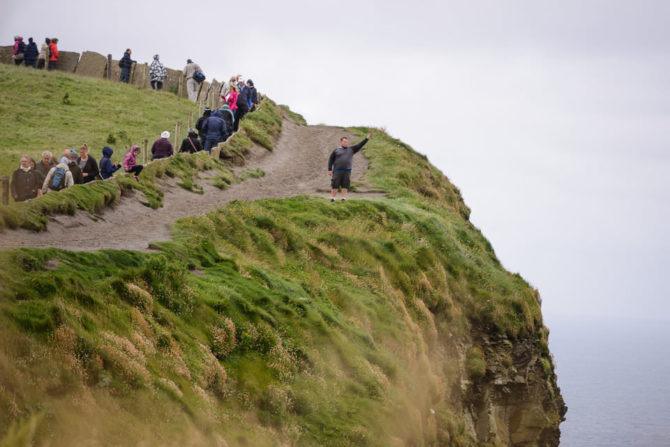 While most tourists stick to the path, which is a safe distance from the edge, some will walk within inches of the drop-off. I took this photograph during a light rain and strong gusts of wind.

I am not trying to excuse myself from the idiocy that affects obsessed photographers. I have climbed a few sharp and slippery hills that were beyond my comfort zone, and I’ve taken photos farther into the ocean than what seems smart in hindsight. In recent years, though, I have worked to take more care to avoid these situations — and I have never walked so close to the edge of a cliff. No shot is worth this type of risk.

If you ever take pictures at the edge of a large drop like the Cliffs of Moher, realize the dangers that you are facing. Risks are a natural part of life, and they can be important to taking successful photographs; I don’t dispute that at all. But when dozens of people walk to the farthest edge of a 700-foot drop on a windy, rainy day, something is very wrong. As photographers, we have a collective responsibility to reject — and avoid taking part in — this type of behavior, not encourage it. Until then, people will continue making these tragic decisions.

Spencer Cox is a nature and travel photographer from Franklin, Tennessee, who is studying journalism at Northwestern University. To contact Spencer directly or view more of his work, visit his website at Spencer Cox Photography. Or, follow him on Facebook. Also published here, and used with permission.

Chasing for a perfect holiday snapshots is dangerous – let this video show you why
« Mood board like a boss!
Assaulted photojournalist reunited with his camera weeks after it was thrown into a lake »