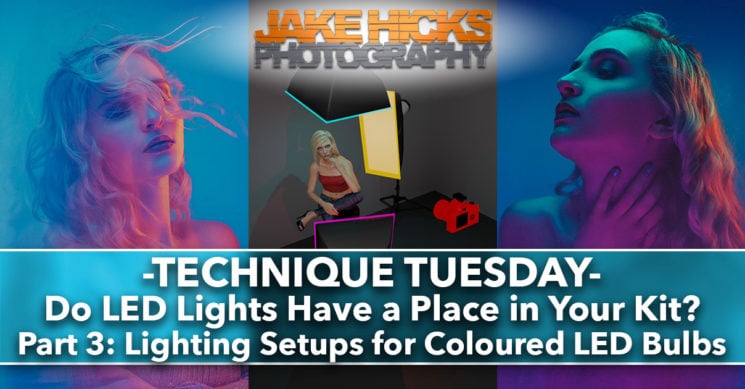 This is the last part of a three part mini-series of articles on LED lights for photographers. Part 1 looked at the pros and cons of commercial level LED lighting for photographers, so if you missed it, Do LED Lights Have a Place in Your Kit? – Part 1: Pros & Cons. Part 2 saw us test the viability of using coloured LED bulbs in our strobes, including what to look for and what I recommend. Here’s the link to that one too if you missed it Do LEDs Have a Place in Your Kit? Part 2: Coloured LED Modelling Bulbs.

In our final part on using LEDs as photographers, I wanted to share a shoot I did where I replaced the standard tungsten modelling bulbs in my strobe with coloured LED modelling bulbs. After my tests last week that discussed which LED bulbs I would use, I decided to go with the mid-price Smart Life ones that were powerful, had colour controls via an app and weren’t too pricey.

For this shoot I swapped out my regular tungsten modelling bulbs and I replaced them with coloured LED bulbs instead.

In this article, I’ll share the setup that I tried and I’ll show you the lighting techniques I used as well as the resulting images. The aim of these setups was to test not only the colours of the bulbs with a model and not simply a white wall but also how the bulbs reacted to the modifiers as well. Last weeks test showed how bright the bulbs were on their own, but with a softbox now attached, how bright were they and what camera settings did I have to use to make the bulbs viable.

This was a simple three light setup and all with softboxes attached to the strobes. 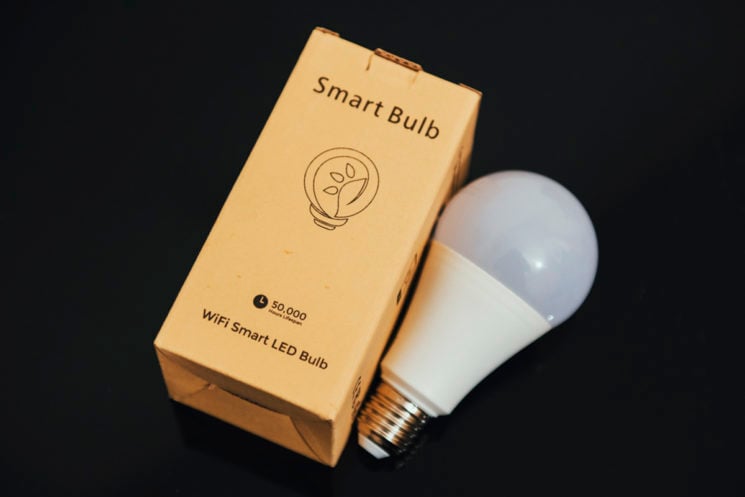 For these shots, I was using the Smart Life bulb in three of my strobes. No flash will fire and the images will be captured using the ambient light from these bulbs alone.

Remember: None of the strobes were firing flash. Instead, they all had their tungsten modelling bulbs replaced with the coloured LED bulbs instead. All of these shots were taken using the resulting coloured ambient light from those LED bulbs.

Note: The whole setup was placed next to a white wall so as to allow the colours to spill past the subject and onto the background. 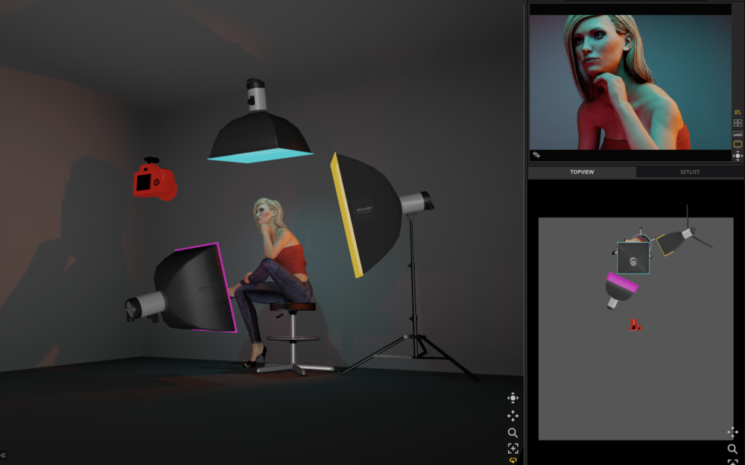 Diagram made with Set.a.Light 3D 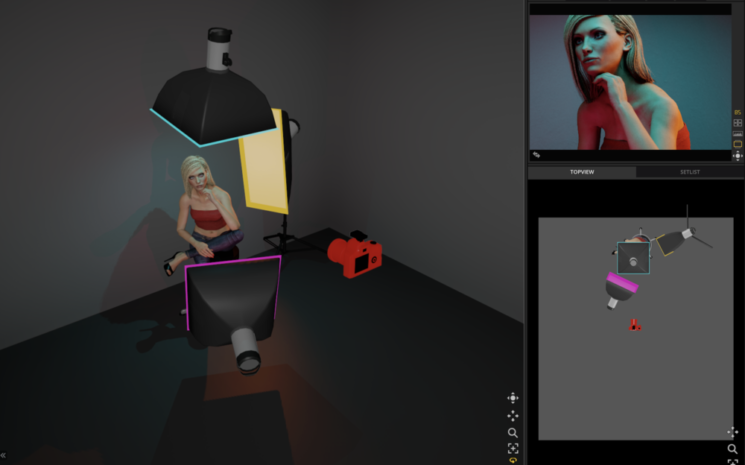 Diagram made with Set.a.Light 3D

This setup stayed the same even though I’ll share 3 varying looks below. All I did to get the variation of shots was to adjust the colours the bulbs emitted via the free app that came with the bulbs. 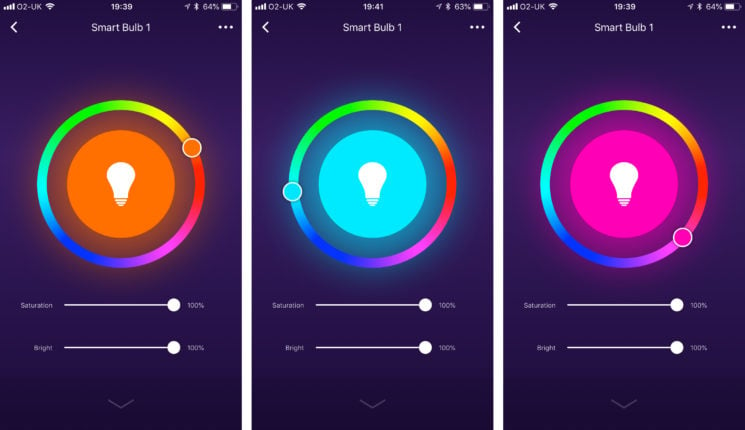 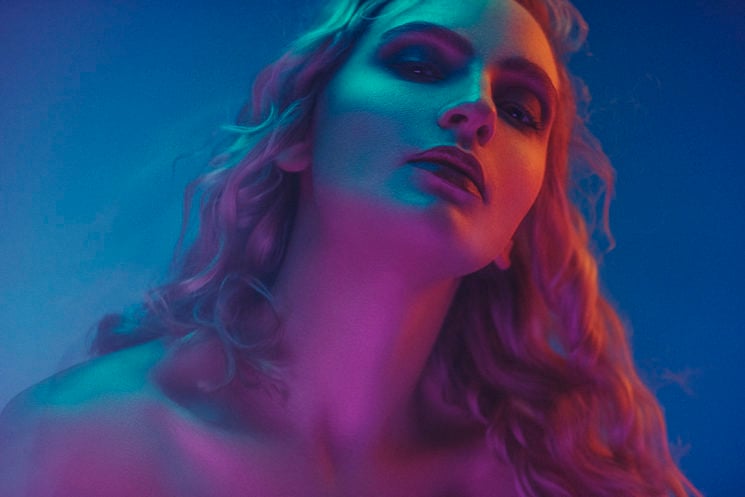 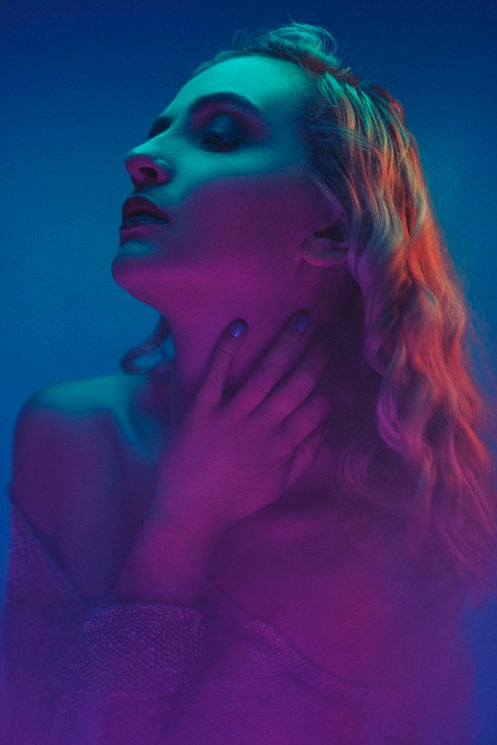 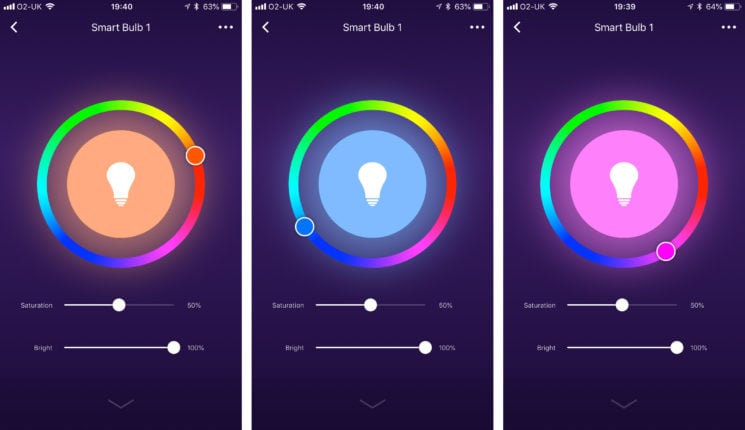 Note how these colours are using a 50% saturation value to give a softer more pastel tone. 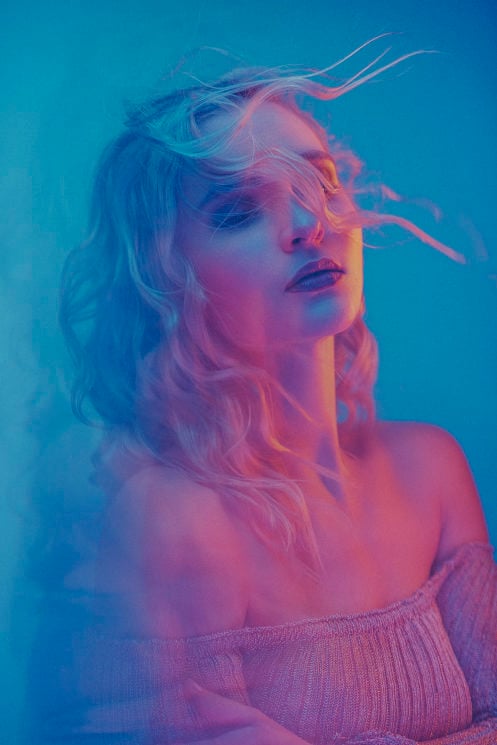 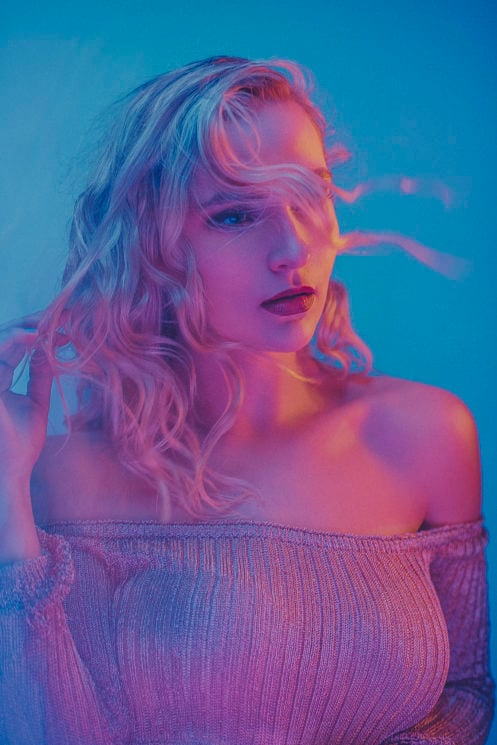 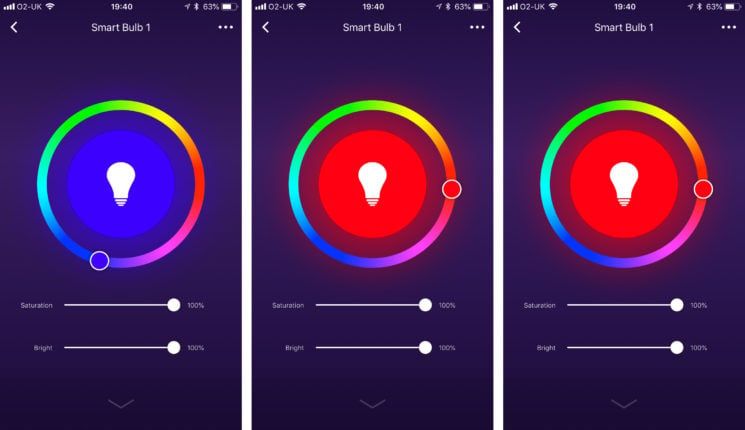 For this last setup, I really wanted to test the deep and highly saturated colours to see how the bulbs managed them. Here, two of my lights have a red colour 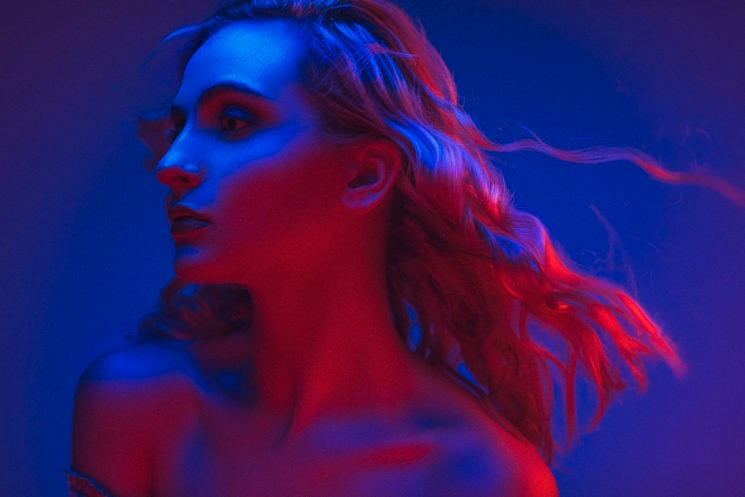 Very easy to use – What you see is what you get which makes colour lighting far easier than with flash and gels.

Convenience – Being able to adjust hue, saturation and brightness of all the lights instantly from your phone makes adjustments and changes very quick.

Colours – Although the app may not always show you exactly what you’re getting, simply adjusting the colours by looking at the bulb gives you almost every colour imaginable.

Value – Granted you’ll need either a strobe or lamp to operate these, but the bulbs themselves are fairly cheap at £15 each.

Modifiability – If you’re using these bulbs in place of a modelling bulb in your strobes then you’ll have access to a seemingly limitless about of modifiers for your lights.

Power – The biggest immediately obvious downside for me is the brightness of the bulbs. But if you’re happy shooting at ISO 400 at f2.8 and 1/60th of a second, you’ll be fine.

Want to try it out?

So if you’ve seen the results so far, weighed up the pros. and cons. and thought you’d like to try these out but aren’t sure if your strobe can accept these bulbs, what’s next?

The strobes I used here were the Pixapro Lumi 200Ws. Note: The watts has no effect on the power of modelling bulb and a 1000w strobe will provide just as much power to the modelling bulb as a 200w strobe.

LED Smart 10w bulb – Remember that you don’t need anything else for this to work, but you will need a smart device, and access to WiFi to make changes to the bulb. You’ll also need to download the free app to access the bulb interface.

So if you like the idea of ambient coloured lighting as these LED bulbs provide, are there any alternatives? At this stage, it’s still limiting but there a couple of options to consider.

First, you could look at a strobe specifically designed for LEDs and strobe modifiers in mind. An entry level LED strobe is the Daylite60D LED. This little guy has all the perks of having access to all S-Fit modifiers and allows you to see exactly what you’re doing via the ambient shooting that LED allows. The Daylite60D LED isn’t particularly bright at 60w / 6000 lumen, but that’s still 6 times brighter than the LED bulbs we were just using in this article and at a little over £150 it won’t break the bank either.

If brightness is what you’re after and you can afford a little more, a look at the LED200D MKII is highly recommended. This larger strobe has access to all of the S-Fit modifiers like softboxes and beauty dishes again, but with a lot more power. This 196w / 14,000 lumen LED head is nearly £400 but if you consider that we were able to shoot coloured portraits in this article with a 10w /900 lumen bulb, this packs a punch.

If you’re not bothered by the ability to add generic S-Fit modifiers to your LED then you could consider an entirely different LED system that has the ability to offer a wide variety of looks via its modular system. This Spekular kit comes with 4 separate LED strips that can be rearranged in a multitude of ways and of course each of these strips can each be gelled separately. This specialist piece of kit does come with a steeper price tag at nearly £650 but with each of the 4 strips producing 1,500 lumens / 15w, when combined it kicks out 6000 lumens / 60w.

Overall, these coloured LED bulbs were incredibly easy to use, plus seeing as they are casting light all the time unlike flash, it’s incredibly easy to set up your coloured shots and see exactly where each colour is falling on the subject. Also, having the ability and functionality to be able to adjust each individual light’s hue, saturation and brightness from your phone is remarkably convenient.

With regards to the colours; I noticed that although the colour on the app didn’t always relate to what I saw in front of me, pretty much every colour I wanted was available via tweaking the app controls by looking at the colour of the bulb, not the app readout.

The biggest downside that did stand out of course was the brightness or power of the bulbs. The bulbs themselves aren’t hugely powerful and remember that all of these images were shot with ambient light, not flash. As a result, the room I was in needed to be completely dark prior to shooting otherwise the other ambient light in the room would have affected the results. 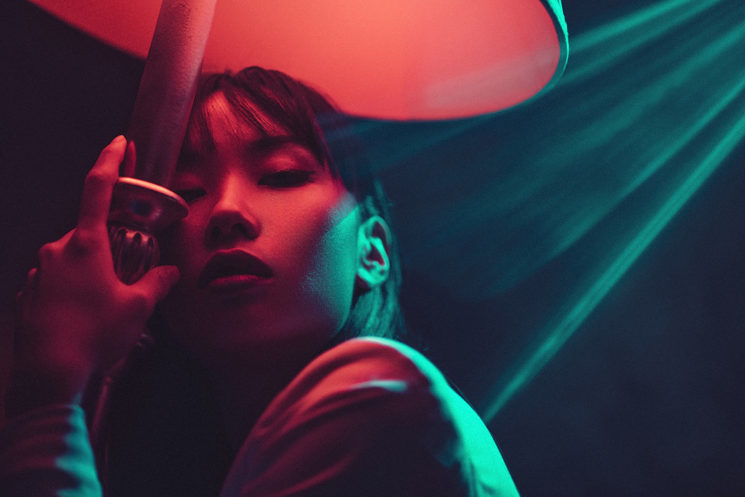 Remember these are just regular bulbs so they can be plugged into environmental lighting like lamps.

For me, this brightness and need for a pitch black shooting environment will severely limit their use. But if you have complete control of the room, their ease of use and ability to quickly adapt and micro-manage colour at a moments notice is very powerful.

Although I don’t think these bulbs will be replacing my strobes any time soon, I do think they are worth having in our bags though, especially if you’re a location shooter. The ability to screw these into existing lighting in the room or location can offer a whole host of additional options and I imagine these could be very useful to a real-estate shooter too. Take a look at the shot above and you’ll see that I’ve simply plugged a coloured LED modelling bulb into a regular lamp and then changed the colour of it to red. I used this in conjunction with a gelled strobe off behind her to camera-right and it looks great.

So although the downside of brightness is an issue, I do think they have a place in our kit bags when nothing else can do what they do.

Thanks as always for checking this article out, I certainly appreciate it. Feel free to ask any questions below and I’ll do my best to answer them as quickly as I can.

Jake Hicks is an editorial and fashion photographer who specializes in keeping the skill in the camera, not just on the screen. For more of his work and tutorials, check out his website. Don’t forget to like his Facebook page, follow him on Instagram and sign up to the Jake Hicks Photography newsletter to receive Jake’s free Top Ten Studio Lighting Tips and Techniques PDF. This article was also published here and shared with permission.